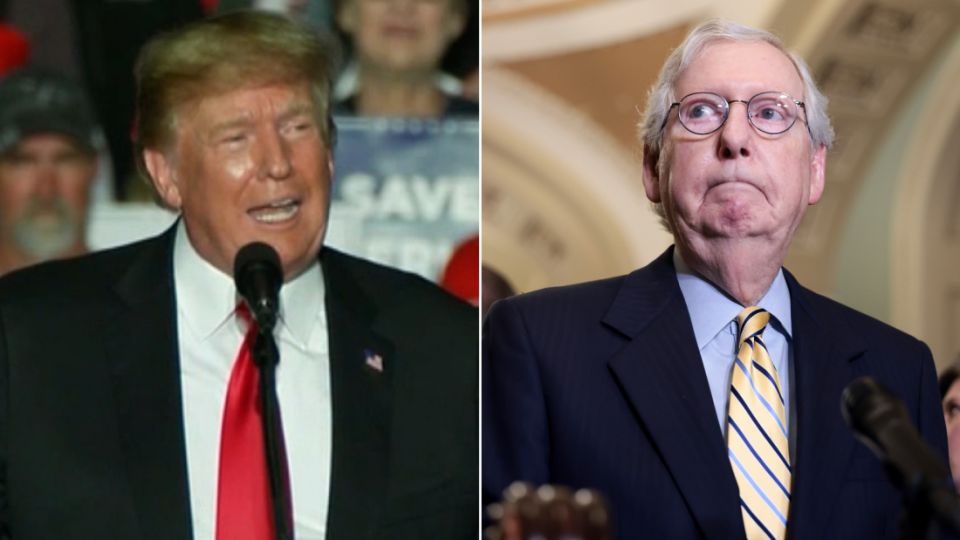 Mitch McConnell’s high-spending super PAC has a suggestion for their party’s campaign committee: Consider picking candidates in primaries who won’t collapse in the general election.

Others see a much bigger issue: Former President Donald Trump and his polarizing presence on the campaign trail – especially as he teased a 2024 campaign in the final days of the midterms.

Then there’s abortion, and Republican hand-wringing over their party’s failure to effectively respond to an onslaught of Democratic attacks. All the while, some are taking out their frustration at party leaders like McConnell and Kevin McCarthy.

The blame game taking shape in GOP circles comes after bullish predictions of a red wave that failed to materialize. Republicans are now at risk of serving in the Senate minority for the second straight Congress and are struggling to take even a narrow House majority.

After getting burned in 2010 and 2012 primaries where weak general election candidates cost his party the Senate majority, McConnell and his allies got more involved in primaries in subsequent cycles to knock off candidates they thought could cost them critical seats. But in 2022, the National Republican Senatorial Committee, the party’s main campaign arm, did not interfere in the primaries.

The party has performed better in races where it was united.

In Nevada, former state attorney general Adam Laxalt is locked in a tight race with Democratic Sen. Catherine Cortez Masto as votes are being counted, and in Georgia, former football star Herschel Walker will face Democratic Sen. Raphael Warnock in a December 6 runoff. But in New Hampshire and Arizona – states where McConnell’s super PAC, the Senate Leadership Fund, and the NRSC had different strategies – retired Army brigadier general Don Bolduc lost and venture capitalist Blake Masters is trailing. And Dr. Mehmet Oz, who survived a brutal primary with Trump’s endorsement, lost in a race that could ultimately cost their party the majority.

Retiring Pennsylvania Republican Sen. Pat Toomey said on CNN Thursday that Oz suffered because gubernatorial GOP nominee Doug Mastriano, a far-right Trump ally, “ended up losing in an epic beat down,” dragging down the rest of the ticket.

“There’s a very high correlation between MAGA candidates and big losses,” added Toomey, referring to Trump’s “Make America Great Again” slogan. “I think my party needs to face the fact that if fealty to Donald Trump is the primary criteria for selecting candidates, we’re probably not going to do really well.”

In an interview with CNN, Steven Law, the head of SLF, said the party needs to discuss whether the NRSC should again take a “hands-off approach to primaries.” And he specifically pointed out that former hard-nosed NRSC political operatives like Ward Baker, who helped flip the Senate in the 2014 midterms, “hardly took a passive approach to anything, let alone candidate selection.”

“Chairman (Rick) Scott and the NRSC respect the will of Republican primary voters and we were proud to stand by our candidates every step of the way,” Hartline said. “Anyone who hates our candidates hates the Republican voters who chose them. It’s as simple as that. Others are welcome to get involved in primaries, but that’s not something the NRSC does.”

Scott, a Florida Republican senator, had been bullish of his assessment, predicting 52 GOP Senate seats and even saying there was a path to 55. McConnell, meanwhile, stayed away from making predictions and long viewed the race for the Senate as a jump ball.

In the interview, Law said that their narrow strategy was partly “driven” by Democratic candidates’ ability to outraise Republicans, and “solidified” after they saw the “[National] Republican Senatorial Committee was having severe financial problems.”

“Our approach to the cycle was to concentrate our activities around a realistic path toward 51 seats, not to hope for a gigantic red wave that might somehow transport us to a much larger majority,” Law told CNN.

There were other major differences in strategy between the SLF and NRSC besides outlook. One was in messaging; McConnell wanted a referendum on Biden’s agenda, while Scott wanted to also promote a platform of what a Republican Senate could do.

Another was how to spend resources. The NRSC wanted to define Democrats “early and heavily,” which meant spending money sooner in the election cycle, even though Scott’s GOP critics worried it would leave Republican candidates – and the Senate Leadership Fund – holding the bag in the crucial final weeks of the campaign. (Law himself commended the NRSC for its “late advertising support to underfunded candidates.”)

But ad reservations revealed the groups’ clashing strategies. In August and September, SLF pulled out of Arizona as Democratic Sen. Mark Kelly vastly outraised Masters and other conservative groups got behind the Republican nominee. The NRSC then announced it would spend for Masters, a controversial Trump-backed candidate who had pushed for “new leadership” in the Senate.

And in the New Hampshire primary, the Senate Leadership Fund supported state Senate president Chuck Morse. Days before the Senate GOP election, popular Republican Gov. Chris Sununu, who had passed on a bid for Senate despite GOP leaders’ pleas, endorsed Morse. After Bolduc still won the primary, the McConnell super PAC pulled its reservation, and the NRSC announced it would go up on air supporting the nominee.

“I think certainly if Gov. Sununu would’ve really leaned in a big way to help Morse that would have been impactful,” Law said.

Sununu spokesman Ben Vihstadt responded, “Chris Sununu endorsed Chuck Morse, campaigned for him, and gave him a boost at the most critical time in the primary.”

The GOP’s other problems

Besides sparking a debate over political tactics, the results of the 2022 elections underscored Republicans’ struggles in dealing with two major issues: Trump and abortion.

In June, the Supreme Court overturned Roe v. Wade and the constitutional right to an abortion, sending the issue to the states. While the majority of Americans support a right to the procedure, and conservatives had fought for nearly 50 years to strip it away, Republicans seemed unprepared for a nationwide fight over abortion.

Some anti-abortion groups criticized Republican leadership for not crafting a unifying strategy, and candidates who tried to duck the issue in swing races.

While Marjorie Jones Dannenfelser, the president of Susan B. Anthony Pro-Life America, praised the victories of conservative candidates like Florida Gov. Ron DeSantis and Texas Gov. Greg Abbott, she sounded dejected at one point on a Wednesday call with reporters.

“I just want to emphasize the reason that we sound slightly disappointed is because the expectations were so high,” said Dannenfelser. “I’m not a pollster, though I know some. And so their expectations were very high.”

Dannenfelser particularly criticized Pennsylvania Republican Senate nominee Mehmet Oz, who lost, she said, because he adopted an “ostrich” or “possum” stance in attempting to avoid the hot-button issue. “Oz lost – and others – because they hoped that the issue would go away,” added Dannenfelser.

Oz aides did not respond to a request for comment. In his debate last month, Oz said “women, doctors, local political leaders” should decide abortion policy. Abortion was the top issue in the Pennsylvania Senate race, according to exit polling data conducted for CNN and other news networks by Edison Research, and Oz appeared to perform poorly among those who said it was their most important.

A House Republican also said the party was hurt by its lack of a cohesive message on abortion, saying most Republicans “turned their backs on women after Roe.”

‘I would like to see the party move forward’

Over the past two days, Republicans have also pointed fingers at the former president, who saw the House and Senate flip blue the past two cycles, and all of his endorsed candidates in 2022 “toss-up” House seats lose.

Since he left office, Trump has refused to concede the 2020 election, trying to force the entire Republican party to embrace his falsehood that he won, and criticized those who acknowledged the truth like McConnell. Republicans like Masters and Bolduc won the primary catering to Trump’s whims, and rejected McConnell. In the general election, Bolduc changed his position on whether the 2020 election was stolen, and after his loss, Trump attacked him for flipping.

Throughout the election cycle, McCarthy and party leaders consistently said Trump would play a key role in their midterm strategy and did not seek to put any distance between the GOP and the former president. But behind the scenes, leaders counseled Republican candidates to not make Trump a focus of their campaigns.

Meanwhile, a key part of the Democrats’ midterm message was linking Republicans to the Trump-wing of the party, painting their GOP opponents as “MAGA extremists.” At the time, Republicans scoffed at the effectiveness of the label.

GOP Rep.-elect Mike Lawler of New York, who toppled the head of the Democrats’ campaign committee, said he would like to see Republicans move past the former president.

“I would like to see the party move forward,” Lawler told CNN “This Morning.” “I think anytime you are focused on the future, you can’t so much go to the past. And I think people are really excited about the opportunity to address the challenges that we’re facing as a country, and I think more focus needs to be on the issues and the substance of those issues than on personalities.”

Trump’s near-constant presence in the media, driven in part by decisions to publicly campaign in the final weeks before Election Day, also diminished the Republican argument that the election was a referendum on the Biden administration, rather than a choice between the two parties.

Law, whose organization spent $211.5 million on TV ads this cycle and an additional $73 million from its affiliated nonprofit, the most of any group in Senate races this cycle, indicated that Trump’s reemergence on the campaign trail could’ve helped Democrats.

“What was critical to winning the midterm, as any midterm, is to make the focus of the election a referendum on the President and his party in Congress. And Democrats were desperate to make the election a choice and to some extent they succeeded in individual races and also in the overall environment,” Law added. “But keeping the focus on Joe Biden and Democrats who had voted for inflationary spending and who supported soft on crime policies, those are the priorities. And to the extent that there’s any distraction from that, it diminishes our ability to drive home that argument.”

But not everyone in the party was eager to assign blame to Trump. Rep. Elise Stefanik, who is running for another term as GOP conference chair and has been floated as a potential Trump running mate, said she fully supports Trump running again in 2024 and encouraged the rest of her party to unite behind him.

“I am proud to endorse Donald Trump for president in 2024,” Stefanik said in a statement to CNN. “It is time for Republicans to unite around the most popular Republican in America who has a proven track record of conservative governance.”