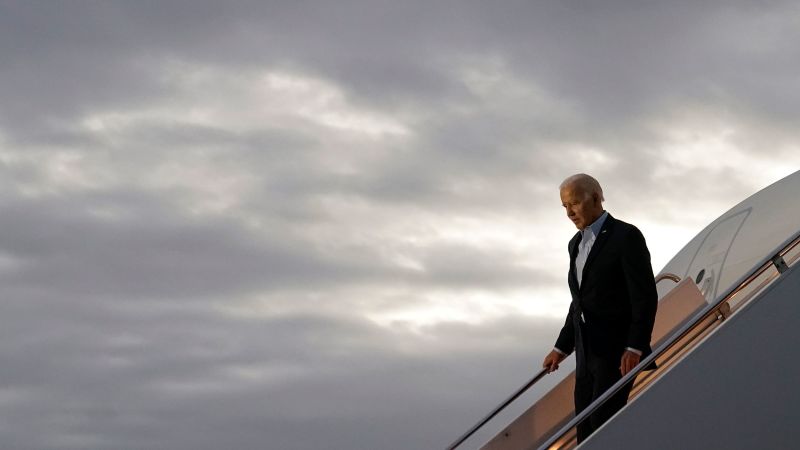 Hopes that Democrats could use the Supreme Court’s overturning of the right to an abortion and a flurry of legislative wins to stave off the classic midterm election rout of a party in power are now a memory. Biden faces a dark political environment because of the 40-year-high in the cost of living – and his hopes of a swift rebound next year are clouded by growing fears of a recession.

On the eve of the election, Democrats risk losing control of the House of Representatives and Republicans are increasingly hopeful of a Senate majority that would leave Biden under siege as he begins his reelection bid and with ex-President Donald Trump apparently set to announce his own campaign for a White House return within days.

It’s too early for postmortems. Forty million Americans have already voted. And the uncertainty baked into modern polling means no one can be sure a red wave is coming. Democrats could still cling onto the Senate even if the House falls.

But the way each side is talking on election eve, and the swathe of blue territory – from New York to Washington state – that Democrats are defending offer a clear picture of GOP momentum.

A nation split down the middle politically, which is united only by a sense of dissatisfaction with its trajectory, is getting into a habit of repeatedly using elections to punish the party with the most power.

That means Democrats are most exposed this time.

If the president’s party takes a drubbing, there will be much Democratic finger-pointing over Biden’s messaging strategy on inflation – a pernicious force that has punched holes in millions of family budgets.

Just as in last year’s losing off-year gubernatorial race in Virginia, which the president won by 10 points in 2020, Democrats are closing the campaign warning about democracy and Trump’s influence while Republicans believe they are addressing the issue voters care about most.

Hilary Rosen, a longtime Democratic consultant, said on the same show that her party had misjudged the mood of the electorate.

“I’m a loyal Democrat, but I am not happy. I just think that we are – we did not listen to voters in this election. And I think we’re going to have a bad night,” Rosen told CNN’s Dana Bash.

“And this conversation is not going to have much impact on Tuesday, but I hope it has an impact going forward, because when voters tell you over and over and over again that they care mostly about the economy, listen to them. Stop talking about democracy being at stake.”

Rosen is not the only key figure on the left uneasy with the midterm strategy. Former Democratic presidential candidate Bernie Sanders, an independent senator from Vermont, urged the White House to do more to stress economic concerns in recent weeks even while acknowledging the crisis of democracy and the importance of abortion rights. In retrospect, it appears Democrats were slow to recognize that a favorable period over the summer, spurred by falling gasoline prices and a hot streak for the president in passing legislation, wouldn’t last long enough to compensate for a ruinous political environment caused by the economy.

In effect, Biden’s stress on the threat to US political institutions posed by Trump essentially asks voters to prioritize the historic foundation of America’s political system over their own more immediate economic fears.

It’s a message that resonates strongly in Washington, DC, where the scars of the US Capitol insurrection are keenly felt. And it is undeniably important because the survival of the world’s most important democracy is at stake. After all, Trump incited an insurrection that tried to thwart the unbroken tradition of peaceful transfers of power between presidents.

But outside the Beltway bubble of politicians and journalists, democracy feels like a far more distant, esoteric concept than the daily struggle to feed a family and to be able to afford to commute to work. From Pennsylvania to Arizona, the return to normality after the Covid-19 nightmare that Biden promised remains elusive to many as the economic after effects of the once-in-a century health emergency linger.

The impossibility of the political environment for Democrats was laid bare in a CNN/SSRS poll released last week. Some 51% of likely voters said the economy was the key issue in determining their vote. Only 15% named abortion – a finding that explains how the election battleground has tilted toward the GOP. Among voters for whom the economy is their top concern, 71% plan to vote Republican in their House district. And 75% of voters think the economy is already in a recession, meaning that Biden’s efforts to stress undeniably strong economic areas – including the strikingly low unemployment rate – are likely to fall on deaf ears.

How Biden spoke about the economy

It’s too simple to say that Biden has ignored the impact of inflation, or doesn’t understand the pain it’s bringing to the country.

The premise of his domestic presidency and his entire political career has been based on restoring the balance of the economy and restoring a measure of security to working and middle class Americans. His legislative successes could bring down the cost of health care for seniors and create a diversified green economy that shields Americans from future high energy prices amid global turmoil. But the benefits from such measures will take years to arrive. And millions of voters are hurting now and haven’t heard a viable plan from the president to quickly ease prices in the short-term.

There is no guarantee that plans by Republicans to extend Trump-era tax cuts and mandate new energy drilling would have much impact on the inflation crisis either. And divided government would likely mean a stalemate between two dueling economic visions. But the election has turned into a vehicle for voters to stress their frustration, with no imminent hope that things will get better soon.

Biden has resorted to highlighting bright spots of the economy – claiming to have reignited manufacturing, high job creation and a robust effort to compete with China. He’s now warning that Republicans would gut Social Security and Medicare on which many Americans rely in retirement.

And in practice, there is not much a president can do to quickly lower inflation on their own. The Federal Reserve is in the lead and the central bank’s strategy of rising interest rates could trigger a recession that could further haunt Biden’s presidency.

Inflation and high gas prices are also a global issue and have been worsened by factors beyond Biden’s control, including the war in Ukraine and supply chain issues brought on by the pandemic. At the same time, however, economists are debating the wisdom of Biden’s high-spending bills that sent billions of dollars into an overheating economy. And the White House’s repeated downplaying of the soaring cost of living as “transitory” badly misjudged the situation and was another thing that battered Biden’s credibility – on top of the confidence some voters lost in him during the US withdrawal from Afghanistan last year.

The Republican Party also got exactly what it wanted as Trump has delayed his expected campaign announcement until after the midterms, depriving Biden of the opportunity to shape this election as a direct clash with an insurrectionist predecessor whom he beat in 2020 and who remains broadly unpopular. Such a confrontation might have enabled the president to dampen the impact of his own low approval ratings and win over voters who still disdain the twice-impeached former president.

Ironically, Biden’s struggles in framing a believable economic message could bring about the very crisis of democracy that he is warning about.

Any incoming GOP majority would be dominated by pro-Trump radicals. Prospective committee chairs have already signaled they will do their best to deflect from Trump’s culpability on the January 6, 2021, insurrection and go after the Justice Department as it presses on with several criminal investigations into the ex-President’s conduct. And Tuesday’s election could usher in scores of election deniers in state offices who could end up controlling the 2024 presidential election in some key battlegrounds. GOP dominance of state legislatures could further curtail voting rights.

High inflation has also always been a toxic force that brews political extremism and tempts some voters to be drawn to demagogues and radicals whose political creed is based on stoking resentment and stigmatizing outsiders.

If Democrats do lose big on Tuesday night, Trump will be a beneficiary.