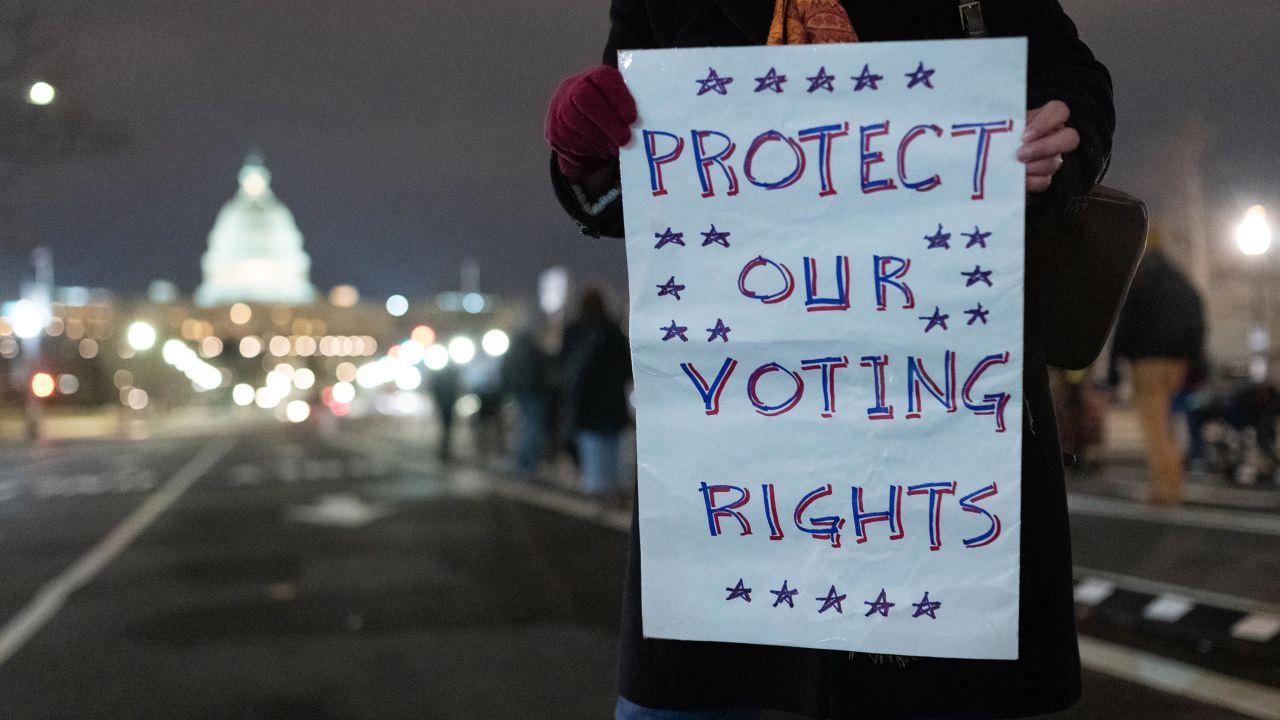 The midterm elections pose the biggest test yet to promises made, with great fanfare, by President Joe Biden’s Justice Department to protect voting rights in the face of ever-evolving threats to democracy.

The Justice Department – where among the ranks of leadership are Biden appointees with significant experience in voting rights – has taken several bold steps on voting issues, filing ambitious lawsuits and launching a task force to address threats against local election officials.

“The Justice Department has an obligation to guarantee a free and fair vote by everyone who’s qualified to vote and will not permit voters to be intimidated,” Attorney General Merrick Garland said last month.

But as voting gets under way in the first nationwide general election since former President Donald Trump’s 2020 election lies, the Justice Department has run into legal limitations constraining the federal government’s ability to act in the space and faces challenges in redirecting a large federal agency to fast-changing circumstances.

“There’s more the Justice Department and the administration should be doing to actually protect voters at these drop box and polling places that would send a clear message that this isn’t going to be tolerated,” said Cliff Albright, the co-founder of the Black Voters Matter Fund, which aims to increase the political power of African American communities.

The Justice Department has weighed in on a dispute over whether the gathering of activists – some of them armed – at Arizona ballot drop boxes to surveil voters amounts to illegal voter intimidation. DOJ’s lawyers argued that “vigilante ballot security efforts” and “private campaigns to video record voters” likely violate the Voting Rights Act.

At least a half-dozen complaints of voter intimidation stemming from the alleged conduct were submitted by Arizona election officials to the Justice Department. But the department has given no indication what more, if anything, it is planning to do with the reports.

In the bigger picture, one action DOJ is expected to take around Election Day is to send personnel to monitor specific jurisdictions. The practice of putting federal observers in place at polling places traces back to the 1965 passage of the Voting Rights Act, but how the department carries that monitoring out was impeded by the 2013 Supreme Court ruling that gutted parts of the VRA.

Republicans meanwhile have condemned DOJ’s involvement in how elections are run. At a hearing where the department’s civil rights chief Kristen Clarke testified on legislation that would bolster the department’s authority under the VRA, Republican Sen. Ted Cruz complained that she and others in department leadership were “partisan activists who haven’t been shy about their hatred of voter integrity laws.”

As aggressive as outside voting rights advocates want the Biden administration to be, there is an acknowledgment that some caution is necessary when it comes to DOJ interventions that reach beyond the traditional bounds of its authority.

If the Justice Department decides to intervene in new types of circumstances with the aim of helping voters, it could set the precedent for similar interventions by a future DOJ that is being pressured to undermine an election, as former President Trump attempted after the 2020 election.

“DOJ is a conservative institution, and at times that could get really frustrating, but there’s also good reason for it,” said Jon Greenbaum, an alum of the department’s voting section who is now the chief counsel for the Lawyers’ Committee for Civil Rights under Law. “Once it decides it’s going to engage on a particular issue there’s no going back.”

Where DOJ’s powers are among the most limited is also where the threats to democracy are most dramatic. The relatively little the department has been able to do to respond to the deluge of hostility and harassment that has been directed at election workers since 2020 shows how the tools in the department arsenal aren’t equipped for the current environment.

Election officials “want to feel that the DOJ has their back, but they’re not sure,” said David Becker, a former DOJ voting section attorney who now leads the Center for Election Innovation & Research, which works with election officials across the country.

A DOJ task force put together to address election threats has reviewed more than 1,000 contacts reported as hostile or abusive by those in the election community.

But so far, the department has only brought eight prosecutions.

Only 11% of the harassing contacts reported by election officials met the requirements for triggering a federal investigation, in part because an “overwhelming majority of the referrals made to the Task Force do not include a threat of unlawful violence,” according to Assistant Attorney General Kenneth Polite, Jr., head of the DOJ criminal division.

“Do I wish they could do more? Yes. Do I know that they are limited by their jurisdiction and their staying in the law? Yes,” said Sylvia Albert, the director of voting and elections at Common Cause, an organization that advocates on democracy issues. “It points to the need to update federal legislation to protect against new types of threats.”

But besides the frustration spawned from the legal hurdles to prosecuting the allegations of harassment, the election community has also complained that the system for submitting allegations is ill-equipped for the avalanche of abusive contacts they’re seeking to report.

Federal grants that can be obtained by election offices to improve physical security have gone mostly untapped, with just $241,000 spent for the purpose of protecting election officials, out of the $285 million program, which is offered for a range of crime-fighting issues.

The department has touted the several meetings for election officials it has held with top DOJ officials as well as training sessions it’s offered, including briefings on the federal funding available for security enhancements.

Challenged voting laws that remain intact for the midterms

The law is much clearer on the authority the department has to go to court to challenge states’ election rules alleged to be discriminatory or that otherwise illegally infringe on a citizen’s access to the ballot. This is where the Biden DOJ has made the biggest splash, particularly with challenges to restrictive voting laws in Texas, Georgia and Arizona.

While those cases are litigated, however, the state laws remain on the books for this election cycle.

Unlike Voting Rights Act cases brought under previous administrations, the department did not opt to seek emergency orders – known as preliminary injunctions – that could have halted the laws’ enforcement while the legal process played out.

The Justice Department declined to comment to CNN on that strategic reasoning, but outside voting rights litigators noted that the Supreme Court, with its rightward shift under Trump, has shown extreme hostility to lower court orders that pause voting rules while elections are approaching.

Besides those lawsuits, and the ones that the Biden administration has also brought challenging redistricting plans, the Justice Department has reached court settlements with several jurisdictions to bring their voting rules in compliance with federal law

DOJ’s approach to election disruptions after ballots are cast

Another looming threat to democracy, voter advocates say, is the push by conspiracy theorists for poorly designed recounts and audits that wrongfully raise doubts about the integrity of an election.

Garland said last year that using “abnormal” methodologies in post-election audits “may put the integrity of the voting process at risk and undermine public confidence in our democracy.”

Trump allies in 2021 successfully sought an such an audit – widely panned by election experts as flawed and motivated by conspiracy theories about fraud – of the 2020 vote in Arizona’s most populous county.

The Justice Department sent a warning letter to the state legislators who launched the ostensible audit, telling the lawmaker that security shortcomings around the audit might run afoul of federal law and that some of its plans could violate US voter intimidation prohibitions.

But the lack of DOJ follow-up from the letter leaves unclear what exactly the department could and would be willing to do if a problematic audit or recount threatened election security or risked intimidating voters.

The department issued guidance on post-election audits last year reminding election officials of the federal mandates dictating how election records are to be handled. The guidance was one of several advisories the Justice Department has issued under its current leadership focused on voting rights, with another release outlining the department’s approach to scrutinizing whether certain types of election rules complied with federal law, and a third that tackled redistricting.

Additionally, at least two jurisdictions – rural counties in Nevada and Arizona– have explored conducting hand counts of ballots cast in the midterms, a method known for being both extremely slow and often inaccurate. Yet it remains uncertain what legal authority DOJ has to police such counts.

The department has been rolling out informational resources for voters as well, including a guide for ex-felons to navigate their voter eligibility according to their state’s laws.

Voter advocates doubted that such warnings of potential legal violations would sway the actions of election deniers who truly believe debunked theories about fraud. But they said they could be a useful tool for election officials who come under pressure from such activists.

“When somebody comes to them and says, ‘hey you need to give me access to this,’ this is guidance they can show that says, ‘I can’t. It’s against federal law,’” Albert said.