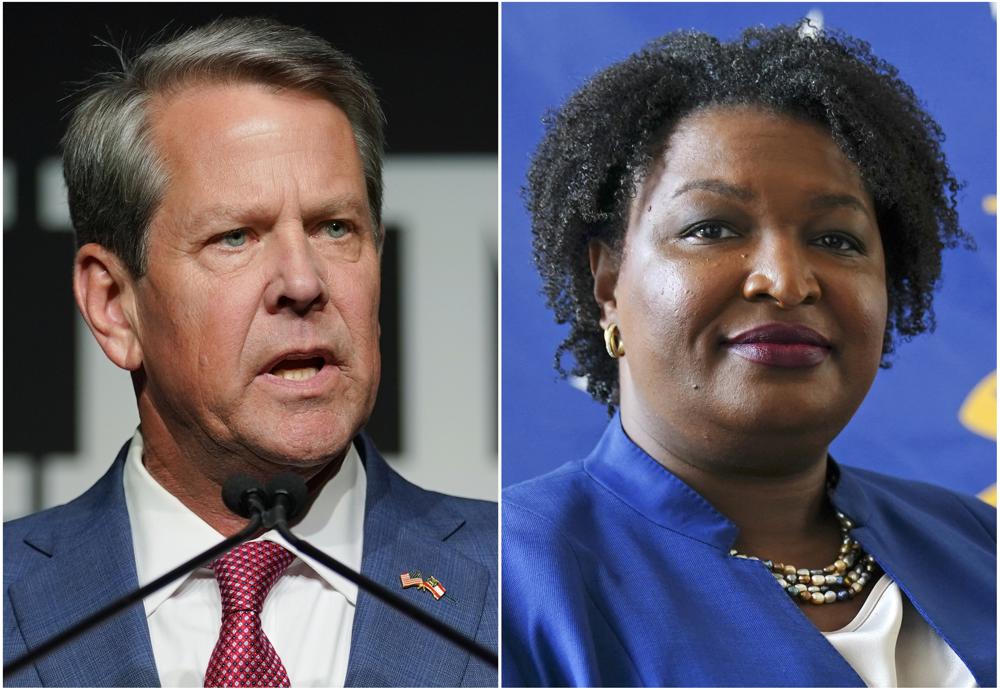 ATLANTA (AP) — Early in-person voting begins in Georgia on Monday, hours before the candidates for governor meet in the first of two scheduled debates. Democrats in particular are trying to push their supporters to cast ballots early in races that include a pivotal U.S. Senate seat. Kemp, Abrams to debate on 1st day of early voting in Georgia

Republican incumbent Brian Kemp, who has been touting his record of reopening Georgia’s economy during the COVID-19 pandemic and assailing Democratic challenger Stacey Abrams as soft on crime, rolled out a batch of crime proposals Monday, signaling that could be a major theme of the debate.

Kemp is proposing to increase the prison sentence for recruiting youths under 18 into a gang to a minimum of 10 years from the current minimum of five years. He’s also proposing to make it harder for judges to release people who have been arrested without cash bail, saying judges should have to consider a person’s criminal history and to prohibit release without cash bail for people with a history of failing to appear in court.

Both proposals, which would need to be approved by the state legislature before becoming law, are likely to bring attacks from advocates for locking fewer people up in Georgia prisons. Kemp and other Republicans have repeatedly undercut efforts to make Georgia’s criminal justice system less punitive in the last four years, even while saying they were honoring the reform legacy of previous Republican Gov. Nathan Deal.

“I’m going to talk to everyone about what’s at stake, what the opportunities are and why we haven’t received all of the benefits that Georgia is entitled to,” she said. “I want to make certain that I make the case that Brian Kemp doesn’t care, he won’t help, and that he spent the last four years attacking our freedoms.”

Kemp campaign spokesperson Cody Hall said Kemp’s goal in the debate will be to “communicate the governor’s record but also make it clear how that record contrasts with where Stacey Abrams wants to take our state.”

What is likely to be the only debate in the Georgia Senate race between Democratic incumbent Raphael Warnock and Republican challenger Herschel Walker took place last Friday in Savannah. That was followed by a debate between Warnock and Libertarian challenger Chase Oliver on Sunday in Atlanta.

More than 4 million people could vote in the state’s elections this year, and if past patterns hold, more than half are likely to cast ballots before Election Day. With Donald Trump’s past baseless attacks on mail ballots as fraud-prone, early voting could be tilted to Democrats. Abrams told reporters on Thursday she’s hoping to push 100,000 to 200,000 voters to the polls in the first week.

“Everybody you’ve ever met should know about it: people you’re mad at, people who are mad at you, people you owe money to, people who owe you money, people you broke up with, this is a good time to get back together,” Abrams said Friday during an Atlanta fundraiser attended by first lady Jill Biden. “But we need everyone across the state to show up the first week of early voting.”

Voters in Georgia are already sending in ballots by mail, with more than 1,000 received by Friday through the mail. More than 200,000 people have requested mail ballots already, with an Oct. 28 deadline to request them. Early in-person voting will run through Nov. 4, with counties mandated to offer two Saturdays of balloting and given the option of offering two Sundays.

Hall said Kemp’s goal is to remain “competitive” in early voting. “We feel confident about our ability to do that,” Hall said.

Kemp and Abrams are scheduled to meet for a second debate on Oct. 30.