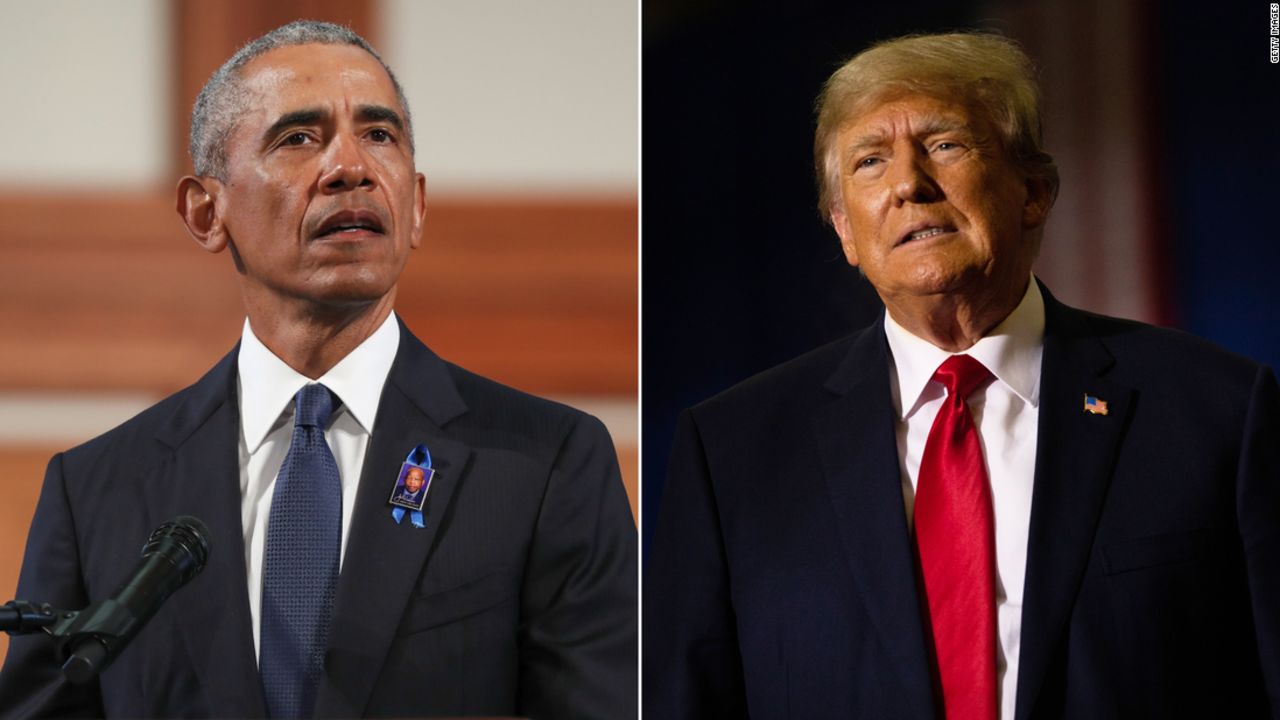 Midterm elections are almost always about incumbent presidents, especially when they are unpopular. But in a unique twist this year, two ex-presidents who lost control of the House while in office have turned into their parties’ closing messengers.

Barack Obama and Donald Trump personify two rival visions of the meaning of America itself and are extending their bitter years-long duel as they find themselves on opposite sides of a profound confrontation over the future of US democracy.

Trump has mobilized his Make America Great Again movement, which first emerged as a backlash to the first Black presidency and is built around the notion that the cultural values of a largely White, working-class nation is under siege from political correctness, undocumented migration, experts and the establishment.

Obama is lambasting politicians, celebrities and sports stars who peddle conspiracy theories, fear and social media “garbage” of which Trump is the most prominent exponent. And he’s delivering searing take-downs of the 45th president’s proteges who are running for election on the platform of his 2020 election falsehoods – like Arizona GOP gubernatorial candidate Kari Lake.

“Why would you vote for somebody who you know is not telling the truth about something? I mean, on something that important, I don’t care how nicely they say it. I don’t care how poised they are or how well-lit they are,” Obama said of the former local TV news anchor, who has emerged as a rising MAGA star, in Arizona on Wednesday.

“What happens when truth doesn’t matter anymore?” Obama added. “If you just repeat something over and over again, and it’s a lie, and yet because your side is saying it, it’s okay.”

Trump adopted exactly that tactic in his return to the campaign trail in Iowa on Thursday night, in what was ostensibly an appearance for veteran GOP Sen. Chuck Grassley, but felt like a first-in-the-nation caucus warmup for 2024.

He falsely claimed that he had won in Pennsylvania and Wisconsin in 2020, two of the states that helped Biden win the White House.

“Your favorite president got screwed,” Trump told his crowd on a frigid night in Sioux City, in which he repeated false conspiracies that Obama spied on his campaign in 2016.

One interesting comparison of the styles of Trump and Obama on show in their rival rallies is in their use of humor. Trump has long used comedy – often dark and cruel – to bind himself to his audience, a feature that doesn’t always come across on TV. Often his crowds look like they are having a whale of a time, enthralled by a rule-breaking bull in a china shop trashing decorum with every word and lacerating his opponents with outrageous accusations and belittling nicknames.

On Thursday, Trump had his crowd in stitches in a digression from an otherwise dystopian speech as a stiff wind blew around the teleprompters showing his prepared remarks.

“I’ve got these teleprompters waving like a flag,” he said. “I’m going to get sea sick!”

Obama’s humor is typically warmer, although no less cutting, but he uses it effectively to ridicule Republicans before delivering a devastating political hit. For instance, in Wisconsin last weekend, he branded Republicans as the party of the rich when he accused Sen. Ron Johnson of voting for a tax break for private plane owners.

“He fought for this. And then, his adult children bought not one, not two, but three private planes because apparently, carpooling was not an option. Now, I mean, you need three?” Obama joked.

Obama on a mission

People in Obama’s extended circle have remarked that their former boss has been on fire this campaign season. Lacking the burdens of presidential office, unlike his former vice president, Obama has shown the kind of freedom and relish for big political rallies that rocketed him to the Democratic nomination in 2008.

It’s easy to tell when the 44th president doesn’t have his heart in his task. In the early rallies of his 2012 election race, for instance, he was lethargic and weary, and he didn’t approach top form in his events last year in an off-year election in Virginia.

But his rallies this year have rocked with the pulsating energy and enthusiasm that is often lacking at appearances by the incumbent president, an older, more conventional politician. Obama has also come up with far more relatable and focused economic messages than Biden has managed – ironically performing the same role for the current president as another ex-president, Bill Clinton, performed for him in the 2012 campaign – a service that led Obama to dub the 42nd president “the explainer-in-chief.”

Obama’s talent for oratory is undiminished and he looks like he’s having great fun showing it off. He’s like a basketball star who after years retired makes a comeback and suddenly starts draining three-pointers. And his popularity means he can drop into the most crucial states where candidates running away from Biden’s unpopularity wouldn’t welcome a visit from the president.

Yet Obama’s prominence is a reminder of the kind of A-list political talent that the modern Democratic Party lacks. It’s an indictment that its best messenger first ran for president 14 years ago.

But despite his rhetorical impact, the question is now how effective Obama will be in driving out the vote. The former president often struggled while he was in office to translate his stardust onto other Democratic candidates and lesser talents. And the question in this election is whether he’s simply preaching to the converted in addressing Democrats who already planned to vote, or whether he’s actually making the sale to independents and disaffected anti-Trump Republicans who Biden badly needs to show up to vote for his party.

Former Obama political strategist David Axelrod, who is now a CNN commentator, said that this onetime boss is being used by his party on a specific electoral mission.

“In the main, this is the time when you try and get your base out and for Democrats this is really important because the reason why incumbent parties generally lose in midterm elections is that their base is not as motivated as the out-of-office party which tends to come and vote its grievances,” Axelrod said. “There is an enthusiasm gap, at least in the polls, between Republicans and Democrats.”

Trump lays the groundwork for a new White House bid

While Obama is rekindling memories of a past presidency, Trump is out on the trail seeking to build the foundation for a future one.

The most recent ex-president has demonstrated the extraordinary hold he still has on the Republican Party by promoting and endorsing a roster of candidates in his election-denying image. There is a question, however, whether Trump’s role in orchestrating inexperienced or extreme nominees, like senatorial candidates like Mehmet Oz in Pennsylvania, Herschel Walker in Georgia and Blake Masters in Arizona, could cost his party the critical seats in swing states that will decide control of the Senate.

Republican officials have worried all election cycle about the former president putting his own political ambitions ahead of his party. Many still blame his false claims of voter fraud for helping two Democrats, Raphael Warnock and Jon Ossoff, win Senate seats in Georgia runoffs, which enabled their party to control the 50-50 chamber with the help of the tie-breaking vote cast by Vice President Kamala Harris.

While he’s heading out in to the country again, Trump has not been doing his normal routine of multiple rallies in the most closely contested states.The GOP has succeeded in the last few weeks in returning the focus of the election to Biden, high inflation and the economic anxieties that are spooking voters.

But there are increasing signs that Trump may not wait much longer to announce a 2024 bid, not least because he has already signaled he would use a presidential campaign to brand legal investigations he faces related to his hoarding of classified documents in his home in Mar-a-Lago and his conduct leading up to the Capitol insurrection on January 6, 2021, as proof of political persecution.

“They are weaponizing the Justice Department,” Trump said at his rally Thursday, accusing Democrats of a transgression of which he himself was guilty when he was in the White House and treated attorneys general as his personal lawyers.

Former Trump White House senior counselor Kellyanne Conway praised the former president for not taking the focus off the GOP’s midterm message, a decision that may repay him with a radical Republican House majority that he could use to weaken Biden in the run-up to the 2024 election.

“He’d like to have done it already. … I think you can expect him to announce it soon,” Conway said of Trump’s anticipated campaign launch. “He’s being urged by some people to still have a November surprise.”

“Donald Trump is just getting started. I think you should keep your cellphone on,” Conway told reporters at a Christian Science Monitor breakfast on Thursday.

The former president used his rally in Iowa to tease a new campaign.

“I will very, very, very probably do it again,” he said, drawing cheers from the crowd.

If he follows through, this midterm is unlikely to be the last election when Trump and Obama cross swords on the campaign trail.