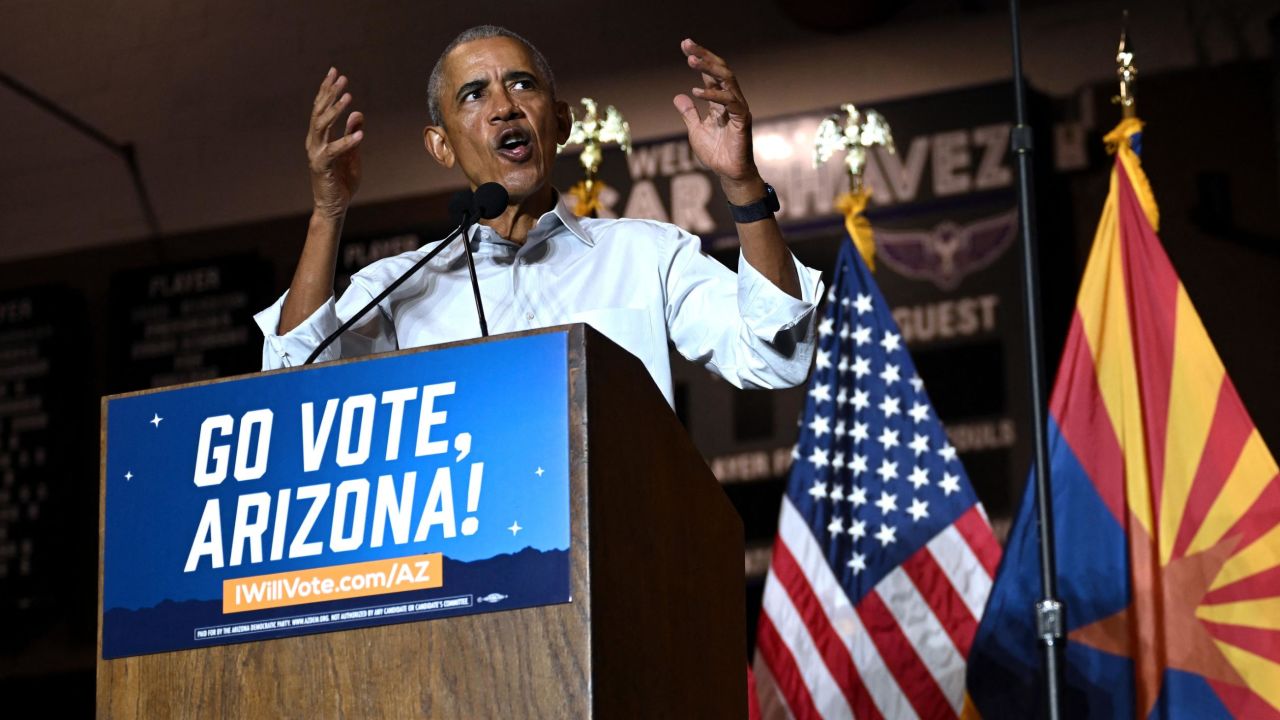 The voters who poured into a Phoenix high school to hear from former President Barack Obama were looking to send a message of defiance Wednesday night.

They said they are determined to defeat former President Donald Trump’s hand-picked slate of election deniers – including gubernatorial nominee Kari Lake, Senate nominee Blake Masters and Secretary of State nominee Mark Finchem – and will not allow their state’s voters to be intimidated by activists who turned up to monitor ballot drop boxes late last month – some of them armed, masked and wearing camouflage.

As President Joe Biden warned Americans from Washington, DC, on Wednesday night that democracy is at stake, it’s here in Arizona that democratic institutions look most fragile ahead of next week’s midterm elections and the 2024 presidential election, in which Arizona is likely to be a pivotal battleground.

Democratic Secretary of State Katie Hobbs, who successfully defeated Trump’s efforts to overturn the 2020 election, now finds herself locked in a tight race against Lake, who has said she will accept the results of a “fair, honest and transparent election,” after previously refusing in an interview with CNN to commit to accepting the results if she lost. And Finchem, who could become the state’s chief elections administrator, is still trying to overturn the results of the last election.

“If you do need one more reason to vote, consider the fact that our democracy is on the ballot. And nowhere is that clearer than here in Arizona,” Obama told the crowd Wednesday, later adding that “democracy as we know it may not survive in Arizona” if election deniers fill all the top state offices.

Maricopa County was the site of repeated “audits” after the 2020 election – including the sham partisan review conducted by the now-defunct firm known as Cyber Ninjas. Both political parties are now girding for another potential battle over the election results in a state Biden won by less than 10,500 votes. And the GOP candidates at the top of the ticket are setting that tone.

Joann Rodriguez, a registered Democrat from Maricopa County, said it was scary that “radical Republicans” in her state were able to elevate candidates like Lake and Masters, who won their primaries in part by echoing Trump’s falsehoods about the 2020 election.

“What are they running on, aside from Trump’s talking points that the election was stolen?” Rodriguez said. She noted that “a lot of Trumpers” are still driving their trucks with Trump flags around her Glendale, Arizona, neighborhood. “And they’re walking around with guns on their hips, showing up at the ballot boxes or showing up at the election sites – for what reason? I mean, do they think that their intimidation tactics are going to work?”

Hobbs touted her record as secretary of state Wednesday night. “I stood for democracy when I refused to give into the insurrectionists who surrounded my home after I certified the 2020 election and I’m still doing it today in this race for governor,” she said.

A New York Times/Siena College poll released this week showed her in a dead heat race with Lake. Inside Elections with Nathan L. Gonzales rates the race a Toss-up.

The state was on edge as Obama arrived in Arizona less than a week before the midterm election to campaign for fellow Democrats, including Sen. Mark Kelly, who is in a close race with Masters. The fact that those top statewide contests may be decided on a razor’s edge is what brought Obama to the Grand Canyon State as he seeks to fire up the Democratic base and make sure that young voters and Latino voters – who will be critical to victory in Arizona – turn out in a midterm election year.

Both Biden and Obama have been arguing that the fate of democracy is at stake, but Biden, who has not been invited to campaign in top swing states, had to make his argument from the opposite side of the country.

The political climate and concerns about the sanctity of the election results are what brought Keith Greenberg, a registered Republican from Maricopa County, to Obama’s rally. He said in an interview that he wasn’t voting for Democrats in this election, he is voting against the Trump ticket.

If the Trump ticket wins, Greenberg said, “It means that the state of Arizona has lost its mind. And this is no longer a safe place to live. If Mark Finchem wins and says, ‘Well, I don’t care what the people voted. I’m going to do this’ – then what’s the point? We’ve lost our democracy.”

Arizona’s status as a tinderbox of election controversies is underscored by the fact that two lawsuits have already been filed in federal court on behalf of voters who felt intimidated by the aggressive patrols at ballot drop boxes late last month.

Voters filed complaints to the Arizona Secretary of State’s Office after some activists were taking pictures of voters and their license plates – apparently inspired by debunked conspiracy theories about so-called “mules” who stuffed ballot boxes in 2020. A federal judge issued a ruling in one of the cases on Tuesday barring members of a group known as Clean Elections USA – whose leader has falsely asserted the 2020 election was rigged – from openly carrying guns or wearing body armor within 250 feet of drop boxes.

Because of the ruling, the group’s members are also now barred from speaking to or yelling at voters who drop off their ballots, and they may not photograph or film voters at the drop boxes. The Justice Department had weighed in on the case that was brought by the League of Women Voters. The DOJ did not formally take sides, but in a legal brief, federal prosecutors said the right-wing group’s “vigilante ballot security efforts” were likely illegal and “raise serious concerns of voter intimidation.”

The depth of the belief among Republicans about Trump’s election lies was underscored by a CNN poll conducted by SSRS that was released on Wednesday: 66% of Republicans said they don’t believe Biden legitimately won the election.

That dynamic is even more pronounced in a state like Arizona where Trump acolytes control the Republican Party and have censured figures like outgoing Republican Gov. Doug Ducey and former Arizona Sen. Jeff Flake for what they said was insufficient loyalty to the former president.

Michelle Gonzales, a registered Democrat from Maricopa County, said she believes that people came to see Obama Wednesday night “so they could feel hopeful” about the democratic process amid all the noise.

“With everything, all the rhetoric going on, I think it’s important to really hear from someone – that we trust and we believe in – that we can be hopeful about this election,” she said. “You can see all these people out here. Thousands of people waiting. I just want to believe that people want to believe in something better – that they have morals and values that we all should have as human beings and not elect these liars and con people.”