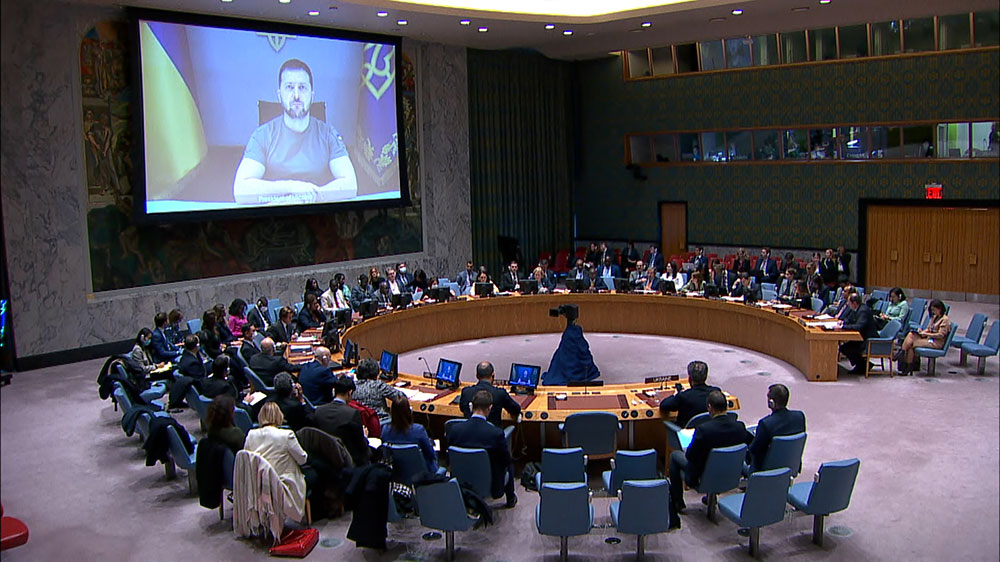 Ukrainian President Volodymyr Zelensky spoke to the United Nations Security Council on Wednesday, urging the group to support the Ukrainian peace formula following a wave of Russian missile strikes that the president dubbed “the Russian formula of terror.”

“I emphasize yet again: it is high time to support the Ukrainian formula of peace. There should be no room for terror in the world,” Zelensky said.

Zelensky emphasized the need for “modern and effective air and missile defense systems” after detailing the series of Russian air strikes that destroyed critical facilities, including energy infrastructure, residential housing, and a hospital, where a newborn baby in the hospital’s maternity ward was killed.

This large-scale assault on energy infrastructure also led to widespread energy blackouts in Ukraine and neighboring Moldova, an act Zelensky said was “analogous to using weapons of mass destruction.”

“When the temperature outside drops below zero and tens of millions of people are left without electricity, heat and water as a result of Russian missiles hitting energy facilities, that is an obvious crime against humanity,” Zelensky stated.

US Ambassador Linda Thomas-Greenfield was one of several representatives to reiterate their support for Ukraine, with emphasis on condemning Russian attacks on Ukrainian energy infrastructure.

“Putin’s motive could not be more clear and more cold-blooded. He is clearly — clearly —weaponizing winter to inflict immense suffering on the Ukrainian people. He has decided that if he can’t seize Ukraine by force, he will try to freeze the country into submission,” Greenfield noted.