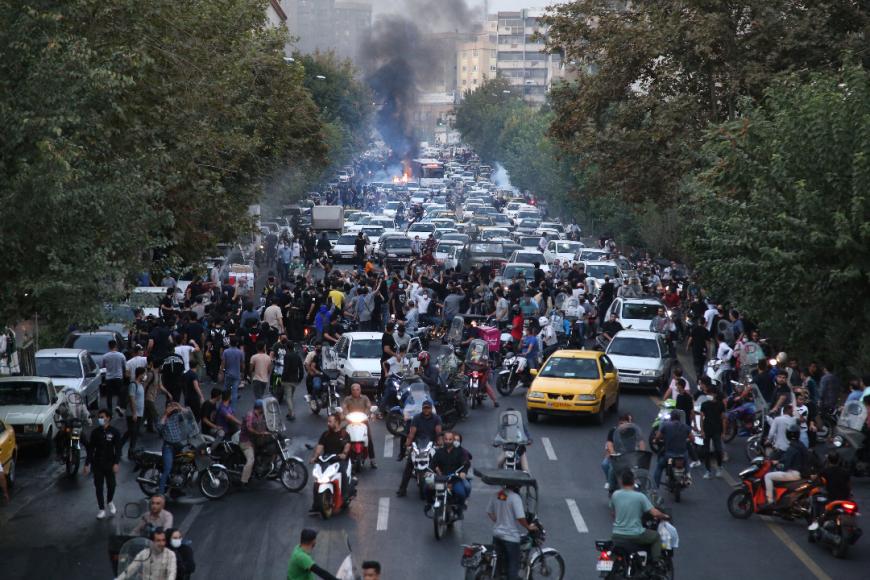 The demonstrations began on September 16, 2022, following the death of Mahsa (Jina) Amini, a 22-year-old Kurdish-Iranian woman, in the custody of the “morality police.” As of November 22, human rights groups are investigating the deaths of 434 people including 60 children. Human Rights Watch has documented a pattern of Iranian authorities using excessive and unlawful lethal force against protesters in dozens of instances in several cities including Sanandaj, Saghez, Mahabad, Rasht, Amol, Shiraz, Mashhad, and Zahedan.

Since mid-November, Iranian authorities have dramatically escalated their crackdown against protests in several Kurdish cities, with at least 39 people killed, according to the Kurdistan Human Rights Network. The group reported that from November 15 to 18, at least 25 Kurdish-Iranian residents were killed in Kurdish cities during three days of protests and strikes to commemorate the victims of the government’s bloody crackdown on protests in November 2019.

The authorities have pressured families of recent victims to bury their loved ones without public gatherings, but several funerals have become the scene of new protests. The group said that at least 14 people were killed in Javanrood, Piranshahr, Sanandaj, Dehgan, and Bookan from November 19 to 21, 2022. Radio Zamaneh said the victims included Ghader Shakri, 16, killed in Piranshahr on November 19, and Bahaedin Veisi, 16, killed in Javanrood on November 20.

A 32-year-old Sanandaj resident told Human Rights Watch that the security forces fatally shot Shaho Bahmani and Aram Rahimi on November 17 and forcibly removed their bodies from the Kowsar Hospital in Sanandaj, and threatened the two men’s families outside the hospital.

Jalal Mahmoudzadeh, a parliament member from Mahabad, told Shargh Daily on November 21 that between October 27 and 29, security forces killed seven protesters in the city Mahabad. Mahmoudzadeh said security forces also damaged people’s houses; one woman was killed in her home outside of the protests. He said that since then, another man had been killed, and three more had been shot and killed during his funeral, bringing the total number killed in Mahabad, since October 27, to 11.

On October 24, Masoud Setayeshi, the judiciary spokesperson, told media that authorities have started prosecuting thousands of protesters. These trials, which are often publicized through state media, fall grossly short of international human rights standards, with courts regularly using coerced confessions and defendants not having access to the lawyer of their choice. As of November 21, trial courts have handed down death sentences to at least six protesters on the charges of corruption on earth and enmity against God. The acts judicial authorities have cited to bring charges against the defendants, including “incineration of a government building” or “using a “cold weapon” to “spread terror among the public.” Amnesty International said that at least 21 people are facing charges in connection to the protests that can carry the death penalty.

Since the protests began in September, the authorities have arrested thousands of people during protests as well as hundreds of students, human rights defenders, journalists, and lawyers outside the protests. Detainees are kept in overcrowded settings and are subjected to torture and other ill-treatment, including sexual harassment, Human Rights Watch said.

Two women who were arrested during the first week of protests in Sanandaj told Human Rights Watch that the authorities brutally beat them, sexually harassed them, and threatened them during their arrests and later while they were detained at a police station. One of these women said she had several severe injuries, including internal bleeding and fractures.

Over the past four years, Iran has experienced several waves of widespread protests. Authorities have responded with excessive and unlawful lethal force and the arbitrary arrests of thousands of protesters. In one of the most brutal crackdowns, in November 2019, security forces used unlawful force against massive protests across the country, killing at least 321 people. Iranian authorities have failed to conduct any credible and transparent investigations into the security forces’ serious abuses over the past years.

Iranian authorities have also used partial or total internet shutdowns during widespread protests to restrict access to information and prohibit dissemination of information, in particular videos of the protests, Human Rights Watch said. They have blocked several social media platforms, including WhatsApp messaging application and Instagram, since September 21, 2022, by an order of Iran’s National Security Council.

“On November 24, UN Human Rights Council members should vote to establish an independent mechanism to document serious human rights violations in Iran and advance on the path to accountability,” Sepehri Far said.