The UN High Commissioner for Human Rights said on Tuesday that the situation in Iran was “critical,” describing a hardening of the authorities’ response to protests that have resulted in more than 300 deaths in the past two months.

“The rising number of deaths from protests in Iran, including those of two children at the weekend, and the hardening of the response by security forces, underline the critical situation in the country,” said Jeremy Laurence, a spokesperson for UN human rights chief Volker Turk, at a Geneva news briefing.

The Islamic Republic has been gripped by nationwide protests since the death of 22-year-old Kurdish woman Mahsa Amini on Sept. 16 after she was arrested by Iran’s morality police for wearing clothes deemed “inappropriate.”

Tehran has blamed foreign enemies and their agents for orchestrating the protests, which have turned into a popular  revolt by Iranians from all corners of society, posing one of the boldest challenges to the clerical rulers since the 1979  revolution.

Iran’s World Cup team declined to sing their anthem before their opening World Cup match on Monday in a sign of support for the protests.

Later this week, the UN Human Rights Council in Geneva will hold a debate on the protests, which is expected to be attended by diplomats as well as witnesses and victims.

A proposal to be discussed at the session seeks to establish a fact-finding mission on the crackdown in Iran. Any evidence of abuses such a body might find could later be used before national and international courts, a UN document showed.

The Office of the High Commissioner for Human Rights (OHCHR) said that more than 300 people had been killed so far, including more than 40 children. These deaths occurred across the country, with deaths reported in 25 of 31 provinces. 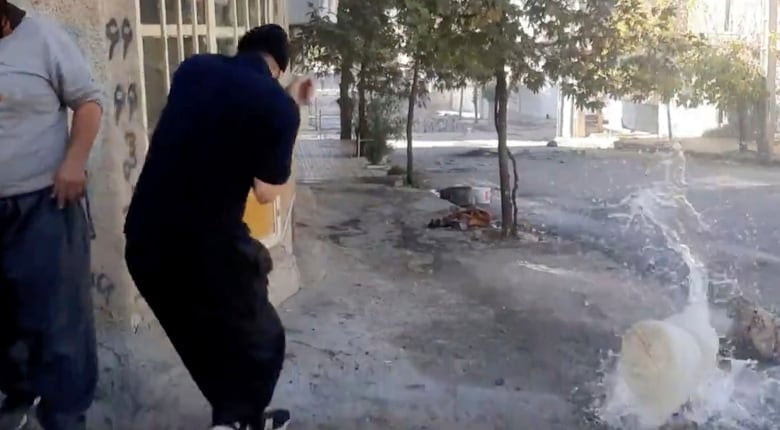 In this image from video, a protester reacts after a water container is hit by a bullet during a protest in Javanroud, a Kurdish town in western Iran, on Monday.

In the same briefing, Laurence also voiced concern about the situation in mainly Kurdish cities, where it has reports of more than 40 people killed by security forces over the past week.

Iranian state media said last month that more than 46 security forces, including police, had been killed in the protests.

Government officials have not provided an estimate of any wider death count.

Iran, which has blamed “foreign adversaries” for the protests, said on Tuesday 40 foreign nationals had been arrested for their role in the unrest.

“So far, 40 foreign nationals have been arrested for their involvement in the protests,” Iran’s judiciary spokesperson Masoud Setayeshi told a televised news conference, without revealing their nationalities.

In September, Tehran said nine Europeans had been arrested for their involvement in the protests.

In attacks linked to the protests, Iran’s Revolutionary Guard targeted on Tuesday a base of what it says are “separatist  terrorists” in Iraq’s Kurdistan region with missiles and kamikaze drones, the semi-official Tasnim news agency said.

“In today’s operation, the base of a separatist terrorist group near Kirkuk, known as the Free Kurdistan Party, was  targeted by missiles and kamikaze drones,” Tasnim said.

The news agency also said that since Nov. 14 the Revolutionary Guards launched a new round of attacks against “separatist terrorists” in response to the group’s alleged anti-security actions in Iranian cities bordering Iraq.

Last week, two people were killed and 10 were wounded when rockets and drones hit the headquarters of Iranian Kurdish parties in the autonomous Kurdish region of Iraq.

Meanwhile, Iran has begun enriching uranium to 60 per cent purity at its underground Fordow nuclear site, the country’s nuclear chief said on Tuesday, a move that irked Western powers pushing Tehran to roll back its nuclear work by reviving a 2015 pact.

Enrichment to 60 per cent purity is one short, technical step away from weapons-grade levels of 90 per cent. Nonproliferation experts have warned in recent months that Iran now has enough 60-per-cent-enriched uranium to reprocess into fuel for at least one nuclear bomb.

“We had said that Iran will seriously react to any resolution and political pressure. … That is why Iran has started enriching uranium to 60 per cent purity from Monday at the Fordow site,” said Mohammad Eslami, according to Iranian media.

The International Atomic Energy Agency’s (IAEA) 35-nation Board of Governors on Thursday passed a resolution ordering Iran to co-operate urgently with the agency’s investigation into uranium traces found at three undeclared sites. Iran had warned that the move could impact its “constructive relations” with the agency.

“Iran’s step is a challenge to the global non-proliferation system,” a statement from the three said. “This step, which
carries significant proliferation-related risks, has no credible civilian justification.

“We will continue to consult, alongside international partners, on how best to address Iran’s continued nuclear escalation.”

Earlier this month, the IAEA said it believes that Iran has further increased its stockpile of highly enriched uranium. As recently as last week, the agency criticized Tehran for continuing to bar the agency’s officials from accessing or monitoring Iranian nuclear sites.

It has been nearly two years since IAEA officials have had full access to monitor Iran’s nuclear sites, and five months since the surveillance equipment was removed. 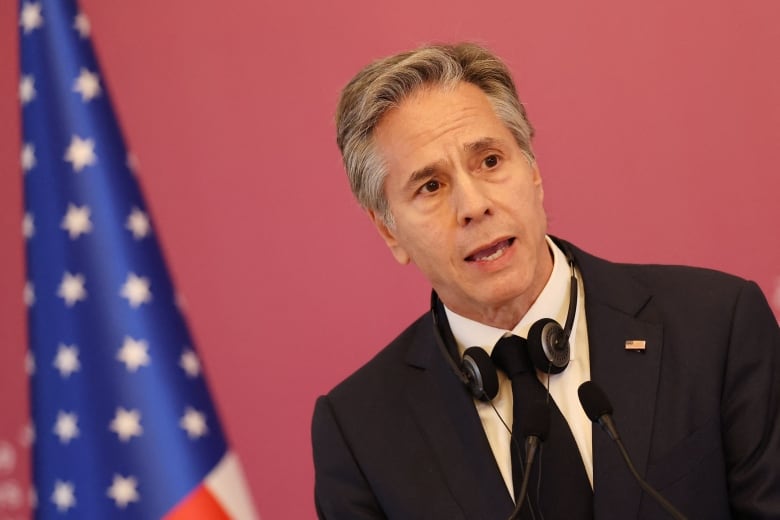 U.S. Secretary of State Antony Blinken holds a news conference with Qatar’s foreign minister in the capital, Doha, on Tuesday

The United States unilaterally pulled out of the nuclear deal in 2018, under then-president Donald Trump. It reimposed sanctions on Iran, prompting Tehran to start backing away from the deal’s terms.

Tensions between the U.S. and Iran have also ratcheted up on the water.

The U.S. military on Tuesday said debris analysis has concluded that the same type of Iranian drone that Tehran has supplied to Russia for its invasion of Ukraine was used to attack a commercial tanker off the coast of Oman a week ago.

The U.S. navy’s Bahrain-based 5th Fleet published photos and details of its investigation into the attack on the
Liberian-flagged Pacific Zircon tanker, including debris from the Shahed-136 drone itself.

In a statement, the navy said the drone ripped a 76-centimetre hole into the back of the ship, and the explosive impact damaged a shipboard boiler, potable water tank and life raft.

“The Iranian attack on a commercial tanker transiting international waters was deliberate, flagrant and dangerous,
endangering the lives of the ship’s crew and destabilizing maritime security in the Middle East,” Vice-Adm. Brad Cooper,
the top U.S. navy commander in the Middle East, said in a statement.

Gulf waters have seen attacks in recent years on tankers that have come at times of heightened regional tensions with
Iran. In July 2021, a suspected drone attack hit a petroleum product tanker managed by an Israeli firm off Oman’s coast. Iran denied accusations it was responsible.