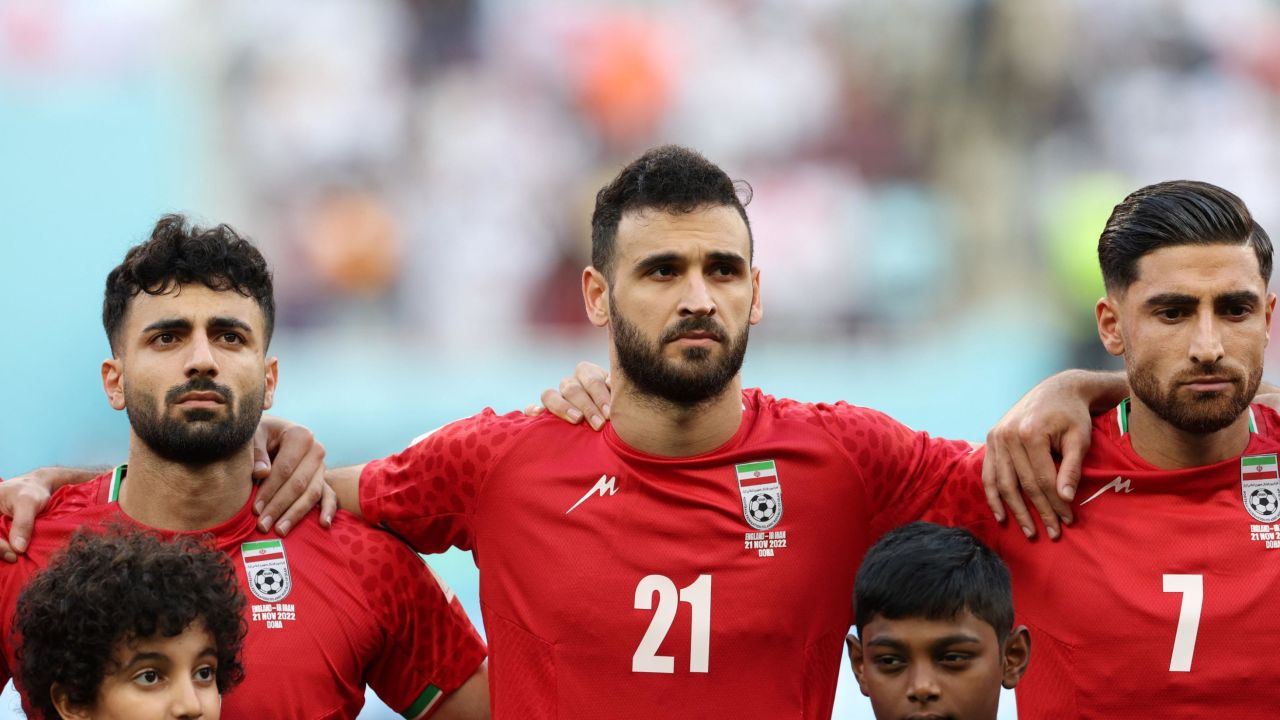 In what seemed to be a show of solidarity with those protesting back home, the players stood silent as the Iranian national anthem played out around the Khalifa International Stadium before kickoff on Monday. The match ended in a 6-2 victory for England.

Protests, chaos and violence have rocked Iran in recent months and threatened the very nature of the country’s regime, which has been in power for more than 40 years.

The protests, referred to by experts as the most significant since the establishment of clerical rule following the 1979 Iranian Revolution, were sparked by the death of Mahsa Amini, a 22-year-old woman who died after being detained by Iran’s morality police, allegedly for not abiding by the country’s conservative dress code. Iranian security forces have unleashed a violent response.

Before the tournament began, Iran’s manager Carlos Queiroz said players would be allowed to protest while they competed in Qatar.

The silent show of respect on Monday was met with a loud reaction from the Iranian fans, many of whom cheered throughout. It’s unclear whether it was in support of the players.

Iran’s goalkeeper Alireza Beiranvand leaves the pitch on a stretcher after he was injured in a crash on heads with Iran’s defender #19 Majid Hosseini during the game against England.

In what seemed to be a show of solidarity with those protesting back home, the players stood silent as the Iranian national anthem played out around the Khalifa International Stadium before kickoff on Monday.

Queiroz sounded frustrated whenever asked about an issue not to do with soccer and didn’t address the national anthem protest directly.

“Those [fans] that came to disturb the team with issues that are not only about football, they aren’t welcome,” said Queiroz, as he sought to protect his players from criticism.

“It’s not the [the players’] fault that the World Cup happens in this moment.

“It’s not right to come to this World Cup and ask them to do things that aren’t their responsibility,” added Queiroz.

“In the right moments, we will express our feelings and our opinions.”

England overwhelms Iran on the pitch

On the pitch, Iran could not cope with the quality of England as goals from Jude Bellingham, Bukayo Saka and Raheem Sterling had England out of sight by the end of the first half.

The impressive Saka added his second in the second half, with further goals from Marcus Rashford and Jack Grelish completing the rout.

Iran gave its fans something to cheer about after Mehdi Taremi scored a well-taken goal to make it 4-1 and added a penalty right at the end of stoppage time, but for many Iranian fans, the result wouldn’t have been the most significant happening of the day.

It speaks to the precarious nature of the political situation in Iran that many fans felt the need to hide their identity as they walked to the stadium for this Group B match.

Three Iranians spoke to CNN wearing hats, masks and sunglasses, none of whom felt comfortable giving their names out of fear of repercussions in Iran.

One had a pair of giant scissors, symbolizing the act of defiance that has spread in Iran of women cutting their hair. They were fearful of rumors, they said, that Iranian authorities had sent security to Qatar to monitor fans, but said their own safety mattered less than the plight of their families and friends back home.

“We know players are under immense pressure, nevertheless the Iranian population expects them to do something,” one fan told CNN.

In the wake of the protests and the human rights violations happening in Iran, several groups inside and outside the country had called on FIFA, the sport’s global governing body, to ban the country from participating at the World Cup.

In October, a group of prominent Iranian athletes lobbied FIFA via a law firm, urging the governing body to suspend the Iranian Football Federation (FFIRI) and ban it from participating at the World Cup.

The Ukrainian Football Association also called on FIFA to “consider excluding” Iran’s national team, citing the “systematic human rights violations” there and “the possible involvement of Iran in the military aggression of Russia against Ukraine.”

FIFA President Gianni Infantino defended Iran’s participation in the World Cup in his pre-tournament press conference, saying the game against England is “two football teams” going head-to-head in matches rather than “two regimes” or “two ideologies.”

England also had a decision to make ahead of its opening match. The Football Association and captain Harry Kane had said they would wear a “One Love” armband to promote inclusion and oppose discrimination.

However, just hours before kickoff, England joined several other nations in reversing its decision due to the danger of receiving yellow cards for wearing the armband.

Organizers had hoped attention would switch from off-field issues to on-field action after the tournament got underway. But, just two days into the tournament, the soccer has yet to take center stage.