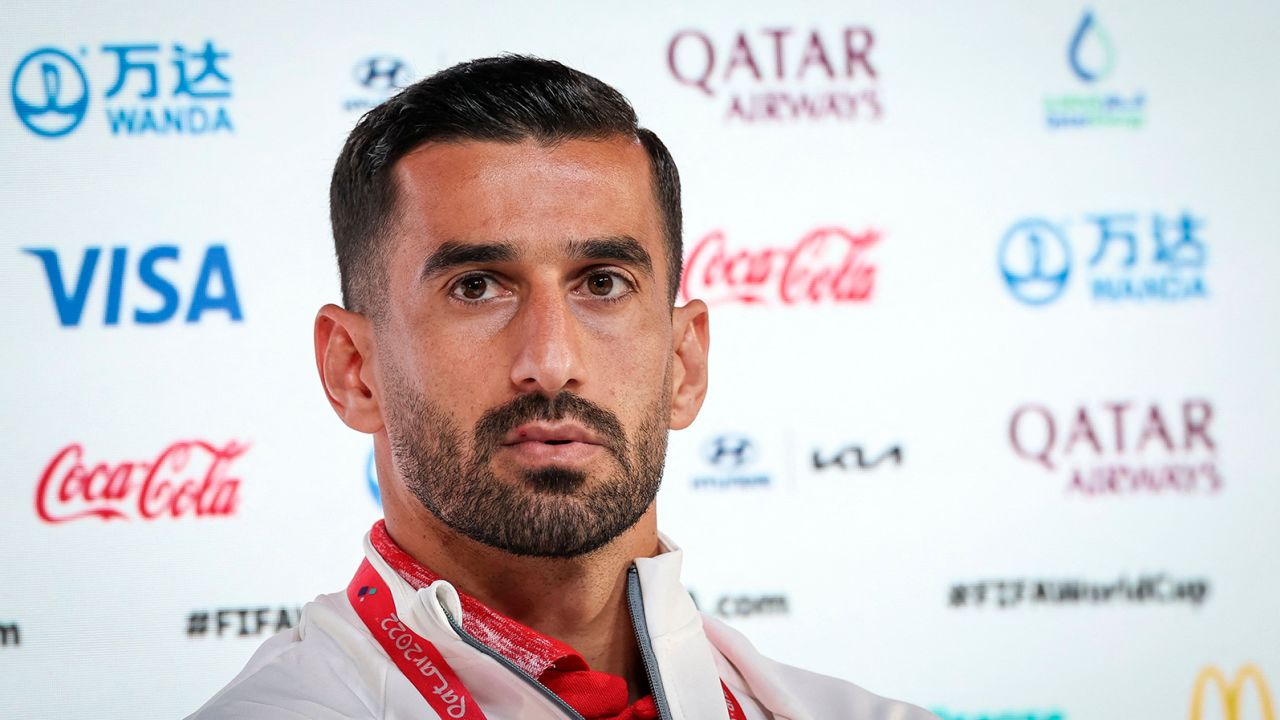 Defender Ehsan Hajsafi became on Sunday the first member of Iran’s national team to speak out from the World Cup in Qatar in apparent support of anti-government protests at home, saying players should be the voice of those suffering.

More than two months of protests in Iran, sparked by the death of a 22-year-old woman while in custody of the country’s morality police, have created one of the boldest challenges to its clerical leaders since the 1979 Islamic Revolution.

Iran’s national team has been in the spotlight in the run-up to the World Cup with anticipation over whether players will use soccer’s showpiece event as a platform to show solidarity with the protest movement.

“They should know that we are with them. And we support them. And we sympathize with them regarding the conditions,” Hajsafi, who plays for AEK Athens, told a news conference.

“We have to accept the conditions in our country are not right and our people are not happy,” he said. “We are here but it does not mean we should not be their voice or we should not respect them.”

The wave of unrest erupted in September after Kurdish-Iranian woman Mahsa Amini died in custody of the morality police for wearing clothes deemed “inappropriate.” Iran’s government blames foreign enemies for the crisis.

Some Iranian sportsmen and women have made gestures seen by protesters as shows of support, including not singing the national anthem or celebrating victories on the field.

According to the activist news agency HRANA, as of Friday, 410 protesters had been killed in the unrest, including 58 minors.

A protester holds a portrait of Mahsa Amini during a demonstration in Tehran.

Other members of the team have avoided discussion of politics in public so far.

Players Karim Ansarifard and Morteza Pouraliganji refused to answer questions on Friday about solidarity with women in Iran. On Thursday, midfielder Alireza Jahanbakhsh, who plays for Dutch club Feyenoord, suggested such questions were a ploy to distract the team.

However, Bayer Leverkusen striker Sardar Azmoun was selected for the team despite having publicy supported the protests in the past.

Some activists have taken a stand against the national team for not doing enough, and called on Iranians to gather at main squares of cities and towns across Iran on Monday night.

A banner of Iran’s national team was set on fire in Tehran, videos on social media showed.

Hajsafi said it was undeniable the situation was not good and he hoped the national team could beat England in Monday’s Group B opener and bring some happiness to the people.

“Whatever we have is from them and we have to fight, we have to perform the best we can and score goals and represent the people,” he said.

“I hope conditions change as to expectations of the people.”