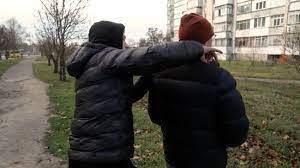 Share
Tweet
Share
Share
Email
Comments
Near Kherson city, Ukraine — Two Russian soldiers walked down a street in Kherson on a spring evening in early March, just days after Moscow captured the city. The temperature that night was still below freezing and the power was out, leaving the city in complete darkness as the soldiers made their way back to camp after a few drinks.

As one stumbled on, the other stopped to relieve himself on the side of the pavement. Suddenly, a knife was thrust deep into the right side of his neck.

He fell to the grass. Moments later, the second Russian soldier, inebriated and unaware, met the same fate.

“I finished the first one immediately and then I caught up with the other and killed him on the spot,” says Archie, a Ukrainian resistance fighter who described the scene above to CNN.

He says he moved on pure instinct.

‘Archie’ killed two Russian soldiers on his own, days after they took over Kherson. He later joined up with other partisans to form a coordinated resistance movement.

“I saw the orcs in uniform and I thought, why not?,” Archie adds, using a derogative term for Russians, as he walks through that same street. “There were no people or light and I seized the moment.”

The 20-year-old is a trained mixed martial arts fighter, with nimble feet and sharp reflexes, who had previously always carried a knife for self-defense, but never killed anyone. CNN is referring to him by his call sign to protect his identity.

“Adrenaline played its role. I didn’t have any fear or time to think,” he says. “For the first few days I felt very bad, but then I realized that they were my enemies. They came to my home to take it from me.”

Archie’s account was backed up by Ukrainian military and intelligence sources who handled communications with him and other partisans. He was one of many resistance fighters in Kherson, a city of 290,000 people before the invasion, which Russia tried to bend but could not break.

People in Kherson made their views clear soon after Russia took over the city on March 2 coming out onto the main square for daily protests, donning the blue and yellow Ukrainian flag.

But Kherson, the first large city and only regional capital Russian troops were able to occupy since the start of the invasion, was an important symbol for Moscow. Dissent could not be tolerated.

Protesters were met with tear gas and gunshots, organisers and the more outspoken residents were arrested and tortured. When peaceful demonstrations didn’t work, the people of Kherson turned to resistance and ordinary citizens like Archie started to take action on their own.

“I wasn’t the only one in Kherson,” Archie says. “There were a lot of clever partisans. At least 10 Russians were killed every night.”

Initially solo operations, like-minded residents began organising themselves in groups, coordinating their actions with the Ukrainian military and intelligence outside the city.

“I have a friend with whom we would drive around the city, looking for gatherings of Russian soldiers,” he says. “We checked their patrol routes and then gave all the information to guys on the frontline and they knew who to pass onto next.”

Russian soldiers weren’t the only ones targeted for assassination. Several Moscow-installed government officials were targeted during the eight months of the Russian occupation. Their faces were printed in posters placed all over the city, promising retribution for their collaboration with the Kremlin, in a psychological war that lasted throughout the occupation.

Many of those promises were kept, with some of those officials gunned down and others blown up in their cars in incidents that pro-Russian local authorities described as “terrorist attacks.”

Archie was arrested by the occupying authorities on May 9, after attending a victory day parade, celebrating the Soviet Union’s win in World War II, wearing a yellow and blue stripe on his t-shirt.

He was taken to a local pre-trial detention facility which had been taken over by the Russian Federal Security Service (FSB) and used to torture Ukrainian soldiers, intelligence officers and partisans, according to Archie.

Ihor says while he was held at this Russian detention center, he spent much of his time looking out the window, day dreaming about escaping the horrors within.

“They beat me, electrocuted me, kicked me and beat me with batons,” Archie recalls. “I can’t say they starved me, but they didn’t give much to eat.”

“Nothing good happened there,” he said.

Archie was lucky enough to be let go after nine days and after being forced to record a video saying he’d agreed to work with the Russian occupiers. His account of what transpired in the facility has been confirmed by Ukrainian military sources and other detainees.

But many others never left, according to Archie and other resistance fighters, as well as Ukrainian military and intelligence sources.

Ihor, who asked CNN not to reveal his last name for his protection, was also held at the facility.

The Ukrainian flag now hangs atop a detention center used by Russian forces to hold and torture Ukrainian soldiers, dissidents and partisans.

“I was kept here for 11 days and throughout that time I heard screaming from the basement,” the 29-year-old says. “People were tortured, they were beaten with sticks in the arms and legs, cattle prods, even hooked up to batteries and electrocuted or waterboarded with water.”

Ihor was caught transporting weapons and says “luckily” he was only beaten.

“I arrived after the time when people were beaten up to death here,” he recalls. “I was stabbed in the legs with a taser, they use it as a welcome. One of them asked what I’d been brought in for and another two of them started hitting me in the ribs.”

Ihor and other partisans helped Ukrainian forces zero-in on this warehouse, where Russian forces had stationed military assets, and target it with artillery.

Through his detention, Ihor was able to hide that he was a member of the Kherson resistance and that transporting weapons was not the only thing he did. Ihor says he also supplied intelligence to the Ukrainian military – an activity that would have incurred far more brutal punishment.

“If we found something, saw it, (we) took a picture or a video (and) sent it to Ukrainian forces and then they would decide whether to hit it or not,” he explains.

Among the coordinates he communicated to the Ukrainian military is a warehouse within Kherson city. “The Russian military kept between 20 to 30 vehicles here, there were armored trucks, armored personnel carriers and some Russians lived here,” Ihor says.

Departing Russian forces were quick to hollow out what was left of the prized interior, but the wrecked building bears the marks of the violent strike. Most of the roof has collapsed, its walls lay shattered and broken glass still covers most of the floor. The structure remains in place but in parts its metal has been mangled by the blast.

Ihor filmed this warehouse used by Russian forces as he walked past it, pretending to be making a phone call. His information helped Ukrainian forces target and destroy it.

Ihor used the Telegram messaging app to communicate the building’s coordinates to his military handler, who he referred to as “the smoke.” Along with the information, he sent a video he secretly recorded.

“I turned on the camera, pointed it at the building and then I just walked and talked on the phone while the camera was filming,” he explains. “Afterward I deleted video, of course, because if they were to stop me somewhere and check my videos and pictures there would be questions…”

He sent the information in mid-September and, just a day later, the facility was targeted by Ukrainian artillery.

The United States and NATO have assessed that when Russia began its invasion of Ukraine, the Kremlin expected its forces to be greeted as saviors, welcomed with open arms. Reality failed to live up to expectation, not just in the territories where Moscow’s armies were pushed back, but also in the areas it was able to seize.

The strike on the warehouse which Ihor helped with, is one of many facilitated by Ukrainian partisans inside Kherson working tirelessly and under threat to disrupt Russian activities within the city.

Eight months after it was occupied by Russia, the city of Kherson is now back in Ukrainian hands and Moscow’s armies are on the back foot, forced to withdraw from the western bank of the Dnipro river.

“Glory to Ukraine” now reads at the entrance to a detention centre used by Russian forces to hold and torture Ukrainian soldiers, dissidents and partisans.

But despite achieving victory here, Ukraine continues to faces almost daily crippling missile strikes almost everywhere else, all while Russian forces continue to press on in the East.

Looking back, Ihor, father to a three-month-old daughter, says he was lucky he wasn’t caught.

“It wasn’t hard, but it was dangerous,” he explains. “If they were to catch me filming such a thing, they would take me in and probably wouldn’t let me come out alive.”