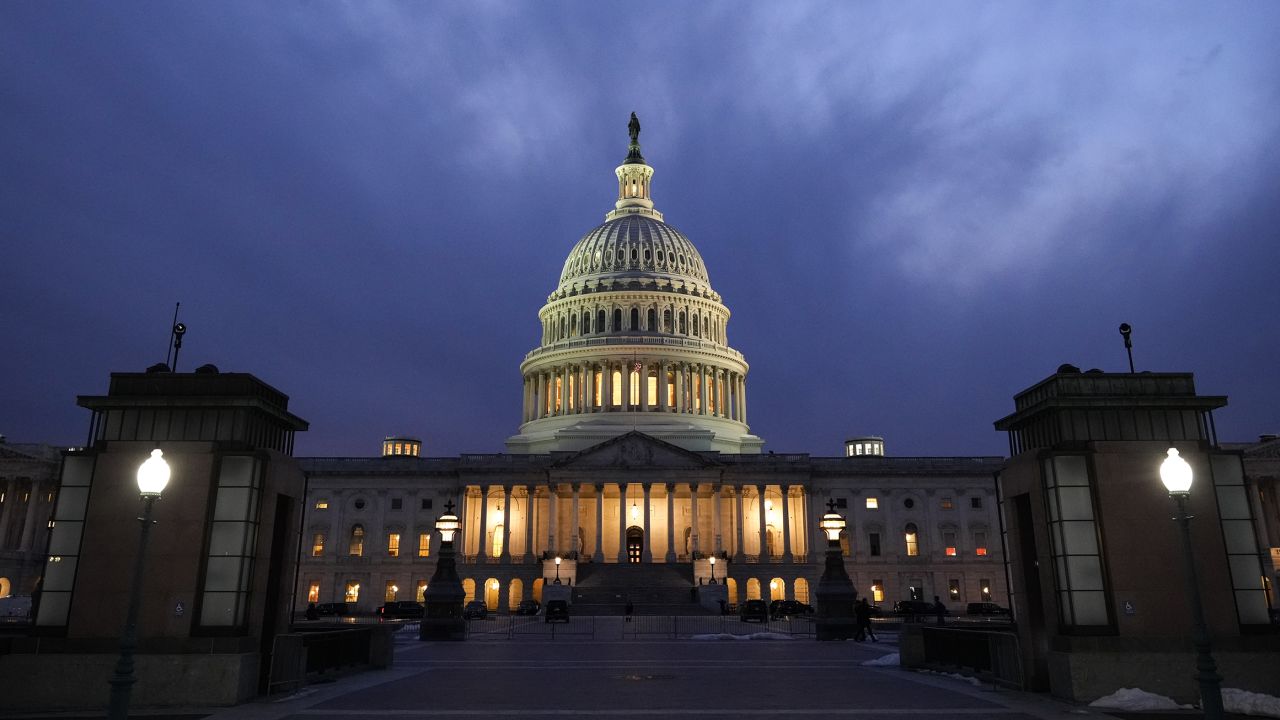 America is heading for a year-end political collision that will set the stage for showdowns between the new Republican-led House and the Democrats who still wield power in the Senate and White House.

A fraught coda to the political battles of 2022 will decide who holds the government purse strings and how far the US will go in funding Ukraine’s war with Russia. It will showcase extremism in the incoming GOP-run House and the size of the Democratic Senate majority. And the 2024 presidential campaign is grinding into gear with ex-President Donald Trump stirring controversy on multiple fronts and President Joe Biden pondering a reelection bid.

In Congress, a lame-duck session will see standoffs that could risk a government shutdown and over the must-lift US government borrowing limit, with grave implications for the economy.

And the House January 6 committee is poised to soon unveil its final report on Trump’s negligence and incitement leading up to the US Capitol insurrection. The findings, amid signs of acrimony inside the panel, could further color sentiment towards the ex-president as he seeks to build momentum after an underwhelming 2024 campaign launch – and as powerful donors, as well as prominent Republicans considering their own White House ambitions, are openly castigating Trump for hosting and then failing to disavow White nationalist and Holocaust denier Nick Fuentes. The special counsel probe into his hoarding of classified documents and 2020 election chicanery is also gathering pace.

Trump is also one of the factors playing into the Georgia Senate runoff election on December 6 that could give Democrats slender breathing room in the chamber or extend the 50-50 split broken only by Vice President Kamala Harris’ tie-breaking vote that made Biden’s agenda so precarious for the last two years.

These next few weeks will show the country has failed to fully process the trauma of the Trump presidency or to arrive at the sense of normality that Biden promised during the 2020 campaign – even as the two rivals maneuver ahead of a possible rematch in 2024. They will also stress the near impossibility of governing at a time when America is deeply split between two political poles since big questions are likely to get pushed down the road.

Big issues not solved this December will be pitched into an even more volatile atmosphere by an aggressive GOP-controlled House primed to slam the White House with partisan investigations.

There’s also the renewed threat of a freight rail strike that could again clog supply lines and fresh Democratic calls for more action on gun control after a tragic new spate of mass shootings. The Democrats have a massive agenda before relinquishing the House but have little political room or time to accomplish it.

Still, Congress is expected to mark one milestone in the coming weeks. The Senate is expected to vote to codify rights to same-sex and interracial marriage after a procedural vote on the measure earlier in November demonstrated strong bipartisan support.

Congress must pass a bill to fund the government by December 16 or risk a partial government shutdown. The administration has asked for $37.7 billion in aid for Ukraine, $10 billion for extended efforts to combat Covid-19 and an unspecified amount for disaster relief after hurricanes hit Florida and Puerto Rico.

Democrats will remain in control of the House until the new Congress in 2023, but a major spending package will also still likely require agreement from 10 Republicans to beat a Senate filibuster. GOP senators are especially skeptical about the administration’s warnings that the US will suffer a relapse in its exit from the pandemic without billions more dollars in funding. And even getting a Democratic majority in the chamber to sign on could be a challenge since West Virginia Sen. Joe Manchin could make another stand against another spurt of government spending, especially since he would face a tough race if he decides to run for reelection in 2024.

There is likely sufficient support for new aid to Ukraine in the Senate, but funding President Volodymyr Zelensky’s war for democracy against Russia is set to become far less routine next year as pro-Trump House members, like Georgia Rep. Marjorie Taylor Greene, are vowing to halt aid needed for vital weapons and ammunition. They want the cash sent to reinforce the southern US border instead.

Will Democrats try to tackle the debt ceiling now?

The most serious showdown of the new Congress could come over raising the government’s borrowing limit that is due to be reached sometime next year. Failure to do so could trash faith in America’s willingness to pay its bills and send shockwaves through the US and global economy.

McCarthy has already warned he will require spending concessions on key programs in return for allowing the government to borrow more money – a scenario that triggered several damaging fiscal showdowns during the Obama administration.

To avoid a repeat, Democrats could use the waning days of their control of both chambers to raise the debt ceiling themselves, using a budgetary process known as reconciliation that could bypass a Senate filibuster. But the process is hugely complex, in terms of congressional choreography and time.

Democratic Senate Majority Leader Chuck Schumer said before Thanksgiving that the “best way to get it done, the way it’s been done the last two or three times is bipartisan.” But Senate Republican leader Mitch McConnell didn’t express much interest in Schumer’s invitation sit down to sort out the issue, saying “I don’t think the debt limit issue is until sometime next year.”

The House Republican leader has a big problem – finding the votes in the new GOP majority to fulfill his dream of becoming speaker.

McCarthy staked out a series of hardline positions heading into the holiday in an apparent effort to appease pro-Trump lawmakers after several declared they won’t vote for him. The California lawmaker can afford to lose only a few GOP votes if he wants to be speaker.

During a trip to the border last week, he warned Homeland Security Secretary Alejandro Mayorkas to resign or face possible impeachment next year. And he said he’ll follow through on a threat to throw high-profile Democrats, such as Reps. Adam Schiff, Eric Swalwell and Ilhan Omar, off of top committees next year.

Speaking on CNN’s “State of the Union” on Sunday, Schiff accused McCarthy of adopting extremist positions for his own naked political gain.

“Kevin McCarthy has no ideology, has no core set of beliefs,” Schiff told CNN’s Dana Bash, saying the top House Republican will do “whatever he needs to do to get the votes of the QAnon caucus within his conference.”

McCarthy’s struggle to confirm his speakership lies partly in the smaller-than-expected GOP majority following the lack of an expected “red wave” in this month’s election. And it could be a preview of a volatile majority and the extent to which his tenure, if he does win the speakership, will be hostage to the whims of the far-right Freedom Caucus and pro-Trump lawyers who want to use their majority as a weapon against Biden. But McCarthy also has to worry that two years of relentless, partisan investigations could turn off voters and lead them to snatch away the party’s fragile edge in the House in the 2024 election.

But before the 2024 election gets into full swing, there’s unfinished business from 2022. Democratic Sen. Raphael Warnock and Republican challenger Herschel Walker go head-to-head in a runoff on December 6 after neither broke the 50 percent threshold the first time around.

Former President Barack Obama, who was the most effective Democratic messenger in the midterms, is due to campaign for Warnock on Thursday. Walker’s chances could depend on whether he is able to win over a significant block of Republican voters who couldn’t bring themselves to vote for him despite backing Republican Gov. Brian Kemp. Walker’s problem is that he’s a protégé of Trump, from whom Kemp kept a good distance.

After Trump announced his 2024 campaign days after the midterms, Warnock and his supporters started framing the runoff as the first chance for Democrats to stop Trump’s bid to return to the White House. Their argument recalled complaints by many Republicans that Trump’s intervention in two 2020 Senate runoffs in Georgia cost the GOP the chance to control the Senate.

This might all be about one seat. But holding the Senate 51-49 rather than 50-50 would be huge for Democrats because it would insulate them from the incapacitation of one of their members and could diminish the power of Manchin, who has been a stubborn brake on Biden’s aspirations for two years.

The former president finds himself under unusual political pressure inside the Republican Party he has dominated since 2015. His backing of several losing, election-denying and unpolished candidates in the midterms angered many key figures in the party. His hosting of Fuentes at the same time as rapper Kanye West at his Mar-a-Lago estate worried Republicans who fear that while he may be a formidable candidate for the GOP presidential nomination, Trump’s empathy for the far-right will again doom him before a national electorate.

“I don’t think it’s a good idea for a leader that’s setting an example for the country or the party to meet with (an) avowed racist or anti-Semite,” Hutchinson said. “You want to diminish their strength, not empower them. Stay away from it.”

Trump acknowledged the meeting in a Truth Social post, but claimed he knew nothing about Fuentes. He also did not disavow him or his views.

This latest storm comes as the new special counsel Jack Smith, blasted by Trump as a “political hitman,” gets up to speed on the serious legal challenges facing the ex-president, who’s suffered several recent defeats in court in his bid to delay accountability. Trump’s early declaration of a campaign – apparently to quell the buzz around possible alternative Republican candidates like Florida Gov. Ron DeSantis – leaves the former president needing a way to create some traction in December and in the early months of the year when he might find it hardest to win political exposure.

The opening stages of the campaign will begin to answer the central question of Trump’s 2024 run – whether his so far rock solid appeal to the GOP base will counter concerns in the wider party about his broader viability.

Will Biden run as well?

Trump’s decision to jump in the race has also increased scrutiny of whether Biden, who turned 80 earlier this month, will decide to run for reelection. The president was asked by CNN’s Betsy Klein during his holiday vacation in Nantucket how his conversations about 2024 were going with his family.

“We’re not having any. We’re celebrating,” Biden replied.