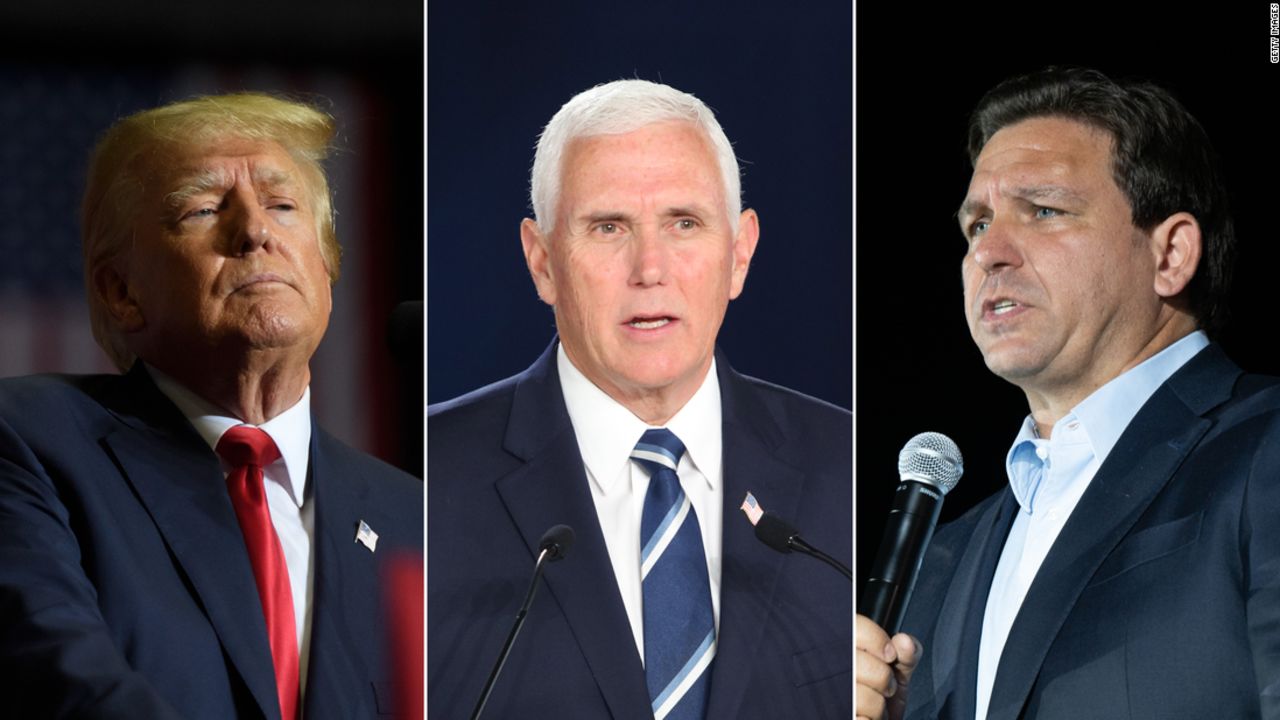 The Republican Party is plunging into an identity crisis after its November red wave dissolved. And while almost everyone with power and influence in the GOP agrees it’s a mess, no one can agree on how to fix it. Or whether Donald Trump should be involved.

Although there was something for the party to cheer on Wednesday with the GOP winning a narrow majority in the House, the combined shockwaves of broader midterm elections disappointment and the ex-president’s leap into the 2024 presidential race Tuesday are causing angst and internal recriminations about the way forward.

And the smaller-than-expected House majority – after losing the Senate – has only invigorated debate over how the GOP can regain other centers of power and whether Trump’s influence could doom it to electoral underperformance again.

The already stirring 2024 Republican presidential race, and the rising prospects of candidates like Florida Gov. Ron DeSantis, are also stoking the GOP leadership speculation. With the party looking for the next big thing, there may be an opening for a new candidate with the charisma and vision to redefine its direction.

Another potential GOP primary candidate, former Vice President Mike Pence, said in a CNN town hall on Wednesday that Americans were looking for “new leadership – leadership that will unite our country around our highest ideals, leadership that will reflect the civility and respect that most Americans have for each other.” Pence’s leadership checklist appeared to rule out Trump, as he called for candidates who would look to the future.

Leadership fights in both chambers of Congress are, meanwhile, exposing deep disunity about how to win back independent and swing voters who have often been scared away by Trump’s extremism. Many lawmakers blame Trump for his fixation on the 2020 election and his lies that he was cheated out of power for their failure to win back the Senate.

But some maintain that the party isn’t Trumpy enough. The ex-president’s allies, for instance, failed in an attempt to oust veteran Senate GOP leader Mitch McConnell – a longtime Trump antagonist – on Wednesday. But if House Minority Leader Kevin McCarthy wants to be the next speaker, he cannot afford to alienate Trump’s acolytes who will wield huge power in the new House, meaning that one half of Capitol Hill at least will dance to the ex-president’s tune.

Away from Congress there are possible signs of a political realignment as some big outside donors break cover and demand the party leave Trump behind. And conservative kingmaker Rupert Murdoch also seems to be putting his finger on the scale, as his New York Post steps up its mockery of the former president. The tabloid carried a strap line across the bottom of its front page Wednesday trolling his 2024 launch party reading: “Florida Man Makes Announcement.”

The level of criticism, and even ridicule, of Trump after his event at Mar-a-Lago lacked the energy of 2016 was unusual and striking and could herald a broader change in attitude toward the two-time Republican nominee.

But in some ways, we’ve seen all this before. Several times, including after the US Capitol insurrection in 2021, the party has looked set to walk away, before testing the wind on Trump’s dominance of its base and appeasing him yet again.

However, Scott Jennings, a Republican strategist and CNN political analyst, said Trump’s subdued 2024 launch on Tuesday didn’t scare rivals off and noted it was beginning to dawn on many party members that the ex-president was a liability.

“A lot of folks are looking for something new, or at least a minimum, they are not quite sure they want to do Donald Trump a third time,” Jennings told CNN’s Erin Burnett.

Trump changed his party – but does it still need him?

The fresh infighting represents the latest struggle for the soul of the GOP, which predates Trump’s arrival, between radical grassroots activists and deeply conservative but more establishment forces. The party is now more populist, working class and performative, thanks to Trump’s shattering of its internationalist, corporate legacy.

But the internal estrangement that cost it power in successive elections is intensifying because of Trump’s return to the spotlight and the impact his 2021 attempt to destroy democracy seems to have had on the midterms.

For years, the equation in the GOP has been simple. Many top Washington office holders would be delighted to sever ties with Trump, whom they regard as unfit for office. But his mystical bond with the party’s voters meant that any politician who wanted a future in the GOP had to genuflect before him.

There are some reasons to suspect this could change, not least because of the rise in the party of hardline new hopefuls like DeSantis.

In the old GOP, grassroots voters who wanted a tough line on immigration, attacks on the press, disdain for experts and scientists and culture war policies could only find them in Trump. But now potential presidential candidates and lawmakers operate according to his playbook. It’s possible to have Trumpism without Trump himself and the political liabilities and chaos that he brings.

Time will tell whether this new reality begins to weaken Trump’s power in the base.

There is no clear evidence yet that Trump’s vaunted base is splintering. But some big GOP donors are already voting with their wallets.

On Wednesday, for instance, Blackstone CEO Stephen Schwarzman, a one-time Trump booster, distanced himself and his formidable fundraising muscle from the former president over his 2020 election-denial obsession.

“America does better when its leaders are rooted in today and tomorrow, not today and yesterday,” Schwarzman said in a statement sent to CNN. “It is time for the Republican party to turn to a new generation of leaders and I intend to support one of them in the presidential primaries.” The defection was first reported by Axios.

Another GOP megadonor, Citadel’s Ken Griffin, recently indicated he would side with DeSantis, a former Trump protégé – if he runs in 2024. The Club for Growth, an influential conservative group, which was once supportive of Trump, also seems to be moving on, and is touting its polls showing DeSantis leading the former president in key states.

The drumbeat of the GOP’s big money donors turning on Trump is sharpening the showdown among party grandees about party philosophy.

“President Trump has lost three in a row and if we want to start winning, we need a new leader,” said Utah Sen. Mitt Romney, the 2012 GOP presidential nominee. Former New Jersey Gov. Chris Christie, a one-time primary rival and Trump friend, got a standing ovation at this week’s Republican Governors Association summit when he put the GOP’s disappointing midterms performance down to Trump.

Leadership acrimony in the Senate

The schism over Trump drove the most serious challenge to McConnell’s Republican leadership in the Senate in 15 years. The Kentucky senator was reelected easily by his conference on Wednesday but had to endure unprecedented criticism of his stewardship following an attempt by Florida Sen. Rick Scott to take his job.

Supporters of Scott, who ran despite heavy criticism of his management of the GOP’s Senate campaign arm in the midterms, framed their critiques of McConnell in Trumpian tones.

“I ran for Senate because we need OUTSIDERS to take on the D.C. swamp and get RESULTS,” Indiana Sen. Mike Braun said in a statement. “Hoosier conservative Republicans are sick and tired of the status quo. I’m proud to support my friend and fellow conservative outsider Rick Scott for our Leader.”

Missouri Sen. Josh Hawley, a possible future Republican presidential candidate who had said he would not back McConnell for leader, has spent recent days slamming his party for its failure to win popular vote majorities and declaring that the midterms were its “funeral.”

At times, he appeared to be hinting at criticism of Trump, though in his comments on Wednesday, he went after the Kentucky Republican and confirmed he voted for Scott.

“I think Senator McConnell’s view is that Trump is largely to blame, and that Republicans have an image problem because of Trump. I have to say that I don’t agree with that,” he told CNN’s Manu Raju.

McConnell’s allies, however, point out that in many cases, the candidates that he backed in the midterm elections generally outperformed the election-denying, extremists and neophytes that Trump thrust upon his party. Conservative Republicans who proved to be competent mangers and steered away from 2020 conspiracies – like Govs. Mike DeWine of Ohio and Brian Kemp of Georgia – far outpaced their fellow Republicans running on the same tickets for the Senate who were closely linked to Trump. Their success underscored how a more conventional, yet still conservative, candidate could prosper at the presidential level in 2024 if they eschewed Trump’s extreme behavior and conspiracies.

The new Republican House, which will take over in January, is likely to also have a strong influence on the GOP’s future direction and its performance in the 2024 election, which will now at least partly become a referendum on its power in government. The new House majority figures to be a valuable political weapon for Trump and its slim room for maneuver could actually give his most extreme allies in the chamber more leeway to dictate policy and tactics. And McCarthy needs the former president to convince House Freedom Caucus members to support him in his bid for the speakership in the new year and to keep him in power. So while the debate over the future of the party rages elsewhere, the House will be pro-Trump.

How that weighs on his party’s prospects with voters will only become clear in another election, in 2024.