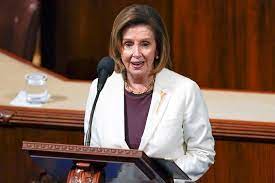 In the spring of 2009, when then-President Barack Obama decided to forge ahead with a far-reaching and politically challenging climate bill, I was summoned by House Speaker Nancy Pelosi to appear behind closed doors before a restive Democratic House caucus.

As senior adviser to the president, I occasionally was called to Capitol Hill by party leaders to allow members to vent when they were unhappy with the White House. And I knew I was in for one of those ritual floggings.

As soon as I crossed the threshold of the meeting room, Pelosi set upon me.

“Your president promised me that if we took up this bill, he would be traveling the country, campaigning for it,” she said, punching out her words for emphasis and pointing a perfectly manicured finger at my chest. “Well, I don’t see him out there and…”

At just that moment, Rep. Jim Clyburn of South Carolina gaveled the session into order and began with an opening prayer. Pelosi paused, bowed her head and folded her hands. But as soon as the “amens” rang out, and even as she performed the sign of the cross, she turned her attention back to me.

“…and if he doesn’t get out there on this, we’re going to pull this bill from the floor!”

The source of Pelosi’s irritation was clear. Though supportive of the climate cause, Pelosi is a pragmatist. She knew that the bill was a heavy lift and had uncertain prospects in the Senate. A vote for it would put at risk some of her marginal members, whom she would be asking to walk a perilous plank.

At our behest, she eventually used her muscle to help pass the bill through the House. But the Senate refused to take it up. She was right. We were wrong.

That is Pelosi. The daughter of the late-Baltimore mayor and congressman Thomas D’Alesandro Jr., she has the heart of an idealist, the moxie of a ward boss and the indefatigable determination of a woman energized by the mission of politics.

She grew up in the political trenches. Her dad was a practitioner of the old-school politics by which leaders knew their constituents, shared greetings on their birthdays, turned up and comforted the bereaved at their wakes and ministered to their needs. And what he hoped for — indeed, expected – in exchange for kindnesses shown and services rendered was their loyalty and their votes.

I once asked Pelosi what she had learned from growing up in a political family. She didn’t have to ponder.

Rahm Emanuel, who served in the House leadership under Pelosi, told me, “People who think of her as a San Francisco liberal miss the point. She’s more D’Alesandro than Pelosi.”

As she announced on Thursday that she would step down as leader of her party in the House after two decades, she recalled her first visit to the House chamber as a six-year-old. She said she could not have imagined then her journey would take her from “homemaker to Speaker of the House.”

But the two are related. Pelosi’s strength is that she has always been part den mother, shepherding her legislative family, and part enforcer, striking fear in those who would defy her.

She learned more from her parents than the mechanics of politics. Pelosi also learned the meaning of politics; not the acquisition of power for power’s sake, but power as an instrument to help make lives better.

I saw that passion and the brilliance of Pelosi firsthand during the epic battle for the Affordable Care Act, into which she poured herself head, heart and soul.

In early 2010, when it appeared the health care bill that was the signature of the Obama agenda was 20 votes short of passage in the House, Pelosi went to work – probing every one of the holdouts about what they would need and what they would accept to get to yes; quietly forging difficult compromises, inch-by-inch; assembling the coalition to pass the historic reform. Her refusal to give in, her determination to see it through, made the difference.

I wept the night the House, with Pelosi in the chair, finally passed the ACA. I cried not because of the President’s political achievement, but because I am the father of a child with chronic and severe epilepsy, whose struggles as a child were made even more painful by a health care system that had discriminated against her because of her preexisting condition. When the gavel fell that night, I knew other children and families would not have to endure that ordeal because of what Obama, Pelosi and the Congress had done.

Pelosi knows how to play the game of politics as well as anyone who has ever led in Congress, experience that may benefit her successor as she transitions to the role of consigliere. But she also always understood its purpose, and the combination of mastery of the process and reverence for its meaning has made her great.

When she was first elected Speaker in 2007, Pelosi’s ascension was rightly heralded for its barrier-breaking significance. But as she passes on the baton of leadership, she will be remembered not just as the first woman to serve as Speaker but as one of the very best and most effective legislative leaders in American history.