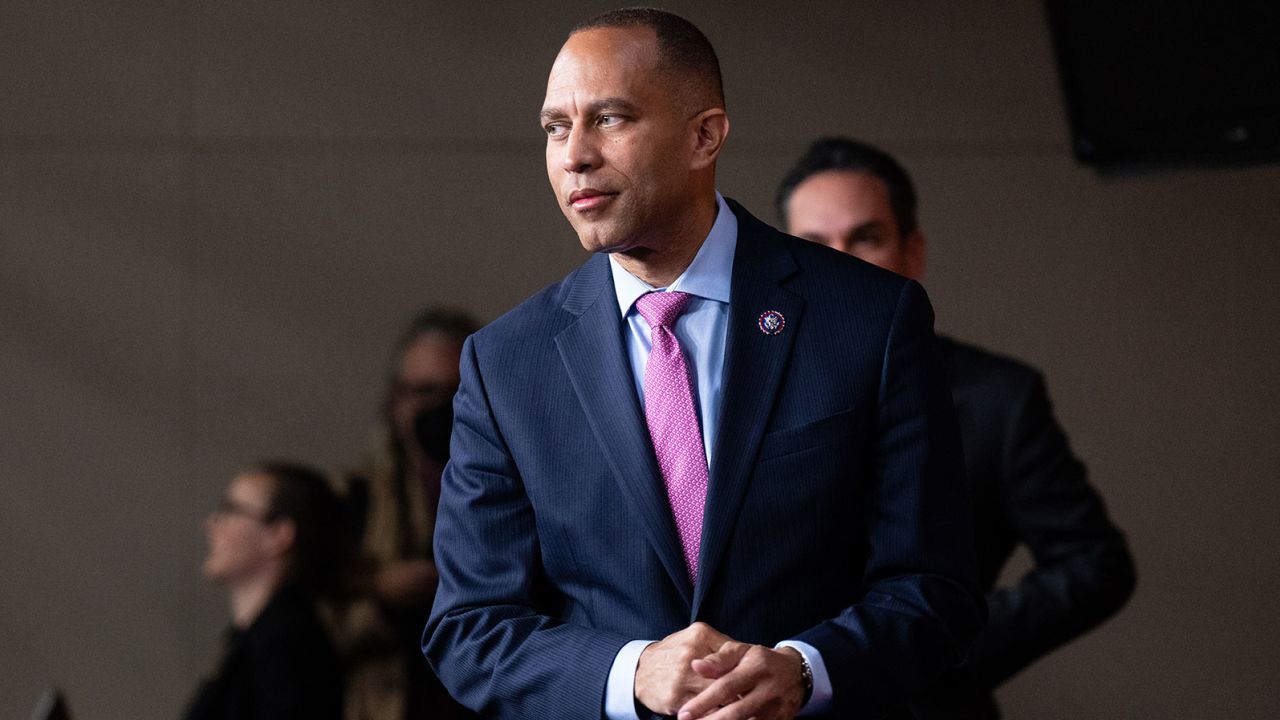 After Pelosi announced Thursday that she’d relinquish the leadership role she held for 20 years, the speaker wouldn’t say who she’d support to replace her in the November 30 vote.

But in a sign of Jeffries’ emerging power, House Majority Leader Steny Hoyer and House Majority Whip Jim Clyburn quickly endorsed him after announcing they would also step down from their leadership posts.

“Speaker Pelosi has left an indelible mark on Congress and the country, and I look forward to her continued service and doing whatever I can to assist our new generation of Democratic leaders, which I hope to be Hakeem Jeffries, Katherine Clark, and Peter Aguilar,” said Clyburn in a statement, referring to the New York, Massachusetts and California Democrats. Hoyer said Jeffries “will make history for the institution of the House and for our country.”

At 52, Jeffries would represent a generational change from the current triumvirate of House Democratic leaders, who are three decades older than him. He became the chairman of the Democratic caucus in 2019, making him the youngest member serving in leadership.

Asked when he’d formally announce his bid for leader, Jeffries said Thursday, “Let’s spend the day at this moment continuing to process the historic nature of Speaker Pelosi and the opportunity that we’ve all had to serve with her.”

“It’s been an amazing experience,” he added. “This is a moment right now to continue to celebrate Speaker Pelosi.”

Before Pelosi’s announcement, Ohio Rep. Joyce Beatty, the Congressional Black Caucus chairwoman, told CNN that she expected the caucus to throw their support behind Jeffries.

Retiring North Carolina Rep. G.K. Butterfield, a former CBC chairman, told CNN that Jeffries “is prepared for the moment” if Pelosi stepped aside. Butterfield said he thought Jeffries would run.

And Wisconsin Rep. Mark Pocan, a former Congressional Progressive Caucus chair, also threw his weight behind Jeffries. “Hakeem Jeffries came in my class and I’m a huge fan of Hakeem,” Pocan told CNN. “I think he’s extremely intelligent, he’s a good person to bring consensus among the caucus. I think he’ll be an outstanding Leader.”

For months, Democratic lawmakers have whispered that Pelosi’s potential exit from Congress could pave the way for Jeffries. The Brooklyn-bred attorney graduated from State University of New York at Binghamton, Georgetown and New York University Law School, before his election to the New York State Assembly in 2006. He has since served New York’s 8th District since winning his first election to Congress a decade ago. In the Trump era, Jeffries played a crucial role passing the bipartisan criminal justice overhaul bill known as the First Step Act and in arguing for the former president’s impeachment as a House manager in the first trial. He has continued to shape the party’s messaging during the Biden administration.

“She’s a historic speaker who’s accomplished an incredible amount, but I also think there are a lot of Democrats ready for a new chapter,” Massachusetts Rep. Seth Moulton, who previously tried to oust Pelosi, told CNN.

But whoever follows Pelosi will serve in the shadow of her legacy as one of the most powerful and polarizing figures in American politics. The Speaker was instrumental in passing the Affordable Care Act, the 2008 economic stimulus bill, a $1.9 trillion coronavirus relief bill, $1.2 trillion bipartisan infrastructure package and, most recently, a sweeping $750 billion health care and tax bill that included the largest investment in American history to address climate change.

Pelosi, who will continue to serve in Congress representing San Francisco, will leave her successor with a greater than expected House minority following the 2022 midterm elections. Some Democrats said they wished she would remain leader.

Asked about Pelosi’s decision, Senate Majority Leader Chuck Schumer clutched his chest and said he had pleaded with her to stay.

“I told her when she called me and told me this and all that, I said, ‘Please change your mind. We need you here,’” Schumer said.