The trainers from Iran’s paramilitary wing have been deployed to help Russia overcome mechanical problems with the fleet.

WASHINGTON — Iran has sent trainers to occupied Ukraine to help Russians overcome problems with the fleet of drones that they purchased from Tehran, according to current and former U.S. officials briefed on the classified intelligence, a further signal of the growing closeness between Iran and Russia since Moscow’s invasion of Ukraine.

The Iranian trainers are operating from a Russian military base in Crimea where many of the drones have been based since being delivered from Iran. The trainers are from the Islamic Revolutionary Guards Corps, a branch of the Iranian military designated as a terrorist organization by the United States.

In recent days, the Iranian drones have become an important weapon for Russia, which has used them as part of the broad strikes across Ukraine against electrical infrastructure and other civilian targets. The deployment of the Iranian trainers appears to coincide with the stepped-up use of the drones in Ukraine and indicates a deeper involvement by Iran in the war.

“Sending drones and trainers to Ukraine has enmeshed Iran deeply into the war on the Russian side and involved Tehran directly in operations that have killed and injured civilians,” said Mick Mulroy, a former senior Pentagon official and retired C.I.A. officer.

Even if they’re just trainers and tactical advisers in Ukraine, I think that’s substantial,” Mr. Mulroy said. The United Nations’ human rights body has said that deliberate strikes on such civilian targets could constitute war crimes.

The State of the War

When Iran deployed the first batch of drones to Russia, errors by Russian operators rendered them ineffective. Mechanical issues also grounded the planes and limited their utility, according to American officials.

Originally, Russia had sent its personnel to Iran for training on the drones. But as the problems continued, Iran opted to send its trainers to Crimea, according to current and former officials, who spoke on the condition of anonymity to discuss classified matters.

The Iranian personnel are far from the front lines, and are deployed to train the Russians on how to fly the drones, the officials said. It is not clear if the trainers are flying any of the aircraft themselves. It was not immediately clear how many trainers Iran had sent.

The United States has said Russia’s reliance on Iranian drones is a sign of the effectiveness of Western sanctions in cutting off Moscow from international markets, leading Russia to struggle with its domestic arms production and limiting its avenues for purchasing weapons on the open market.

After the sale of drones to Moscow, the United States imposed additional sanctions on Iranians and Iranian companies that have been involved in building and designing the aircraft, as well as companies involved in their transport to Russia. 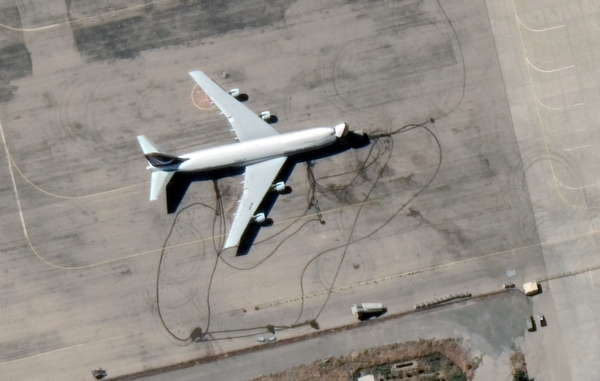 Some of the Iranian cargo planes designated by the United States are U.S.-origin Boeing 747s that have been publicly tracked and filmed flying in and out of Moscow in recent weeks. None of the footage and satellite imagery analyzed by The New York Times revealed what the aircraft were offloading in Russia. A message to Iran’s mission to the United Nations was not immediately returned.

The deployment of the Iranian trainers was reported earlier by The Daily Mirror.

Iran has deployed Islamic Revolutionary Guards Corps personnel to other conflict zones. For example, in Yemen, the group’s officers have mostly stayed out of the fight directly and instead served as trainers and advisers for their Houthi proxy force, Mr. Mulroy said.

While Iran has officially denied supplying Russia with drones for use in Ukraine, U.S. officials said that the first batch of such weapons was delivered in August.

Those include Shaheds, which are single-use drones meant to explode and destroy targets, but which have a range of more than 1,000 miles. Iran has also sent the larger Mohajer-6 drone, which is used for surveillance and can carry up to four missiles.

Strikes this week by Iranian drones in Kyiv have killed multiple people. On Monday, an Iranian-made kamikaze drone struck a residential building and exploded on impact, killing a young couple, including a woman who was six months pregnant.

The drones have also been used to strike at parts of the electrical power grid around the country. President Vladimir V. Putin of Russia appears to be intent on taking down Ukraine’s power infrastructure to plunge the civilian population into darkness as days get colder.

“He has gone to a strategy of terror to make life miserable for the Ukrainians,” Mr. Mulroy said.

The drones would be more effectively used on the front lines of the military battlefield in Kherson or Donbas. Using them on civilian targets shows that Mr. Putin is desperately trying to break the Ukrainian will to fight, according to military analysts.

“The Russians are wasting very high-end munitions, their cruise missiles and the drones provided by the Iranians, in these sporadic attacks on civilian and infrastructure targets that aren’t really doing much lasting damage and are also not in any way going to force Ukraine to surrender,” said Mason Clark, a Russian military analyst at the Institute for the Study of War.

Julian E. Barnes is a national security reporter based in Washington, covering the intelligence agencies. Before joining The Times in 2018, he wrote about security matters for The Wall Street Journal.