US President Joe Biden repeats concerns about US democracy, as defeated predecessor Donald Trump hints at another run for presidency.

Coast to coast, candidates and big-name backers have made their final appeals to voters in the last hours of campaigning for the midterm elections in the United States, with Republicans excited about the prospect of winning back Congress and President Joe Biden insisting his party could spring a surprise.

Democrats argue victories for the Republicans could profoundly and adversely reshape the country, eliminating abortion rights nationwide and unleashing broad threats to the very future of democracy in the US. Republicans say the public is tired of Biden’s policies amid rising prices and concerns about crime.

“Today we face an inflection point. We know in our bones that our democracy’s at risk and we know that this is your moment to defend it,” Biden told a cheering crowd in Maryland, where Democrats have one of their best opportunities to reclaim a Republican-held governor’s seat. “I want you to know, we’ll meet this moment.”

Arriving back at the White House a short time later, Biden was more frank, saying: “I think we’ll win the Senate. I think the House is tougher.” Asked what the reality of governing will be like, he responded, “More difficult.”

Non-partisan election forecasters predict that Republicans are likely to pick up about 25 seats in the 435-seat House of Representatives, more than enough to win a majority. Analysts said the party could also pick up the one seat they need to win control of the Senate, the upper house.

Al Jazeera’s Alan Fisher, speaking from Washington, DC, said such an outcome could be “cataclysmic” for the Democrats and Biden, in particular, over his next two years in office. 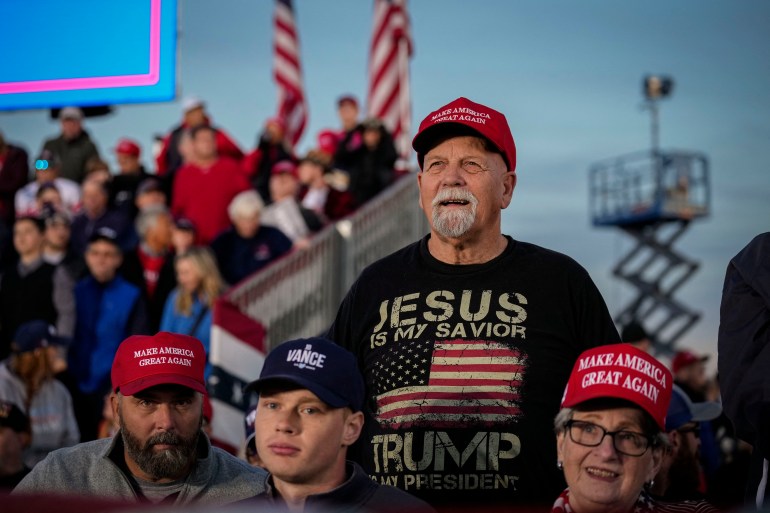 Donald Trump, who was defeated by Biden in 2020, has been campaigning for Republican candidates and teasing supporters that he will run for the presidency again

Dozens of Republican candidates, some of whom could be elected as governors or election administrators in key states, have also echoed and amplified Trump’s baseless claims of fraud in his 2020 election defeat.

The reality-show star turned politician has repeatedly hinted that he may run for president again in 2024. At a rally for Republican candidates in Ohio, Trump said he would make an announcement a week after the election at his Florida estate.

“I’m going to be making a very big announcement on Tuesday, November 15 at Mar-a-Lago in Palm Beach, Florida,” he told the crowd.

Despite Biden delivering on campaign promises to boost infrastructure and clean energy, many people in the US have soured on his leadership. Only 39 percent approve of his job performance, according to a Reuters/Ipsos poll published on Monday, ahead of the midterms.

If Republicans win control of the House or the Senate, that would spell the end of Biden’s efforts to get abortion protections and other Democratic priorities through Congress. A Republican-led Senate could also block Biden’s nominations for judicial or administrative posts.

Control of Capitol Hill would also give Republicans the power to block aid to Ukraine, but they are seen as more likely to slow or pare back the flow of weapons and economic assistance to Kyiv than stop it.

Trump supporters, spurred by his false election claims, have threatened and harassed election workers and voters. Last month, the Reuters news agency said it had documented multiple incidents of intimidation involving an expanding army of election observers, many of them recruited by prominent Republican Party figures

A hammer attack on the husband of House Speaker Nancy Pelosi on October 28 that left him in hospital has further raised fears of political violence. Trump called Pelosi an “animal” when he spoke at Monday’s Ohio rally.

But the White House said on Monday that law enforcement had not reported any specific, credible election-related threats. The US Justice Department said it would monitor voting in 64 locations across the country.

More than 43 million Americans have already cast their ballots, either in person or through the mail, according to the US Elections Project, which tracks early voting.

Experts say it might be days or weeks before the outcome of some close races — and control of Congress — is finally clear.