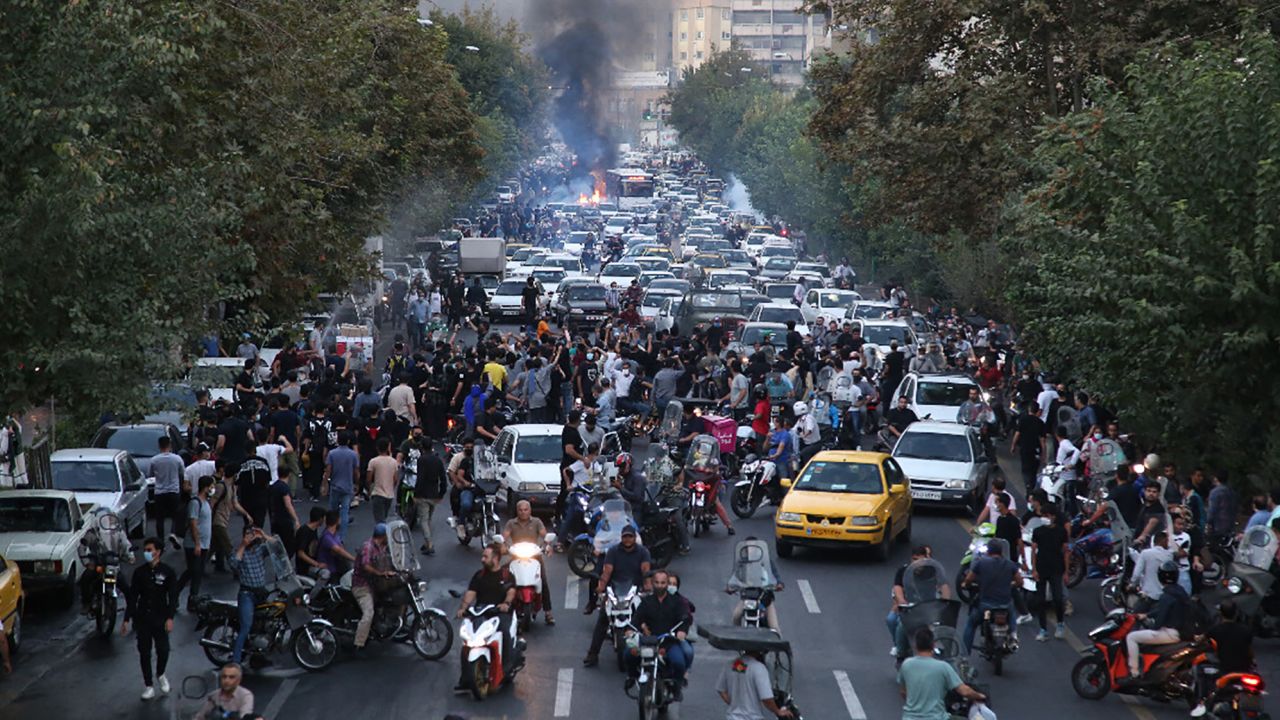 Over the past two months, the government has cracked down hard on demonstrators, leading to the death of at least 326, according to Iran Human Rights, an NGO based in Norway. More than 1,000 have been charged in connection with the protests. On Sunday, an Iranian court issued the first death sentence to a protester convicted of “enmity against God” and “spreading corruption on Earth” for allegedly setting a government building on fire.

So far, the regime remains intact with no signs of cracks in its foundations.

But the Iranian security apparatus hasn’t always been so sophisticated in quashing uprisings, analysts say. The Islamic Republic itself was the product of a revolution, lessons from which it appears to be applying today.

During that revolution, in 1979, the security apparatus was “largely cohesive but extremely overstretched,” says Trita Parsi, vice-president of the Quincy Institute in Washington, DC.

Iran’s previous regime, ruled by Shah Mohammad Reza Pahlavi, relied primarily on its powerful military to contain the uprising that eventually led to its downfall, analysts say. The military ultimately failed to contain the protests.

One of the main factors that led to the 1979 revolution’s success was the military’s declaration of neutrality, said Afshon Ostovar, associate professor at the Naval Postgraduate School in Monterey, California. That was the ultimate blow to the Shah’s prime minister.

On February 11, 1979, the Shah’s last Prime Minister Shahpur Bakhtiar resigned after the Iranian army refused to quash the protests, and called its troops back “to prevent further bloodshed and anarchy,” the New York Times reported at the time. It was a revolutionary win for Ayatollah Ruhollah Khomeini, the Shiite cleric who went on to lead the new regime.

Analysts say it was that over-reliance on a single security force that contributed to the Shah’s ouster, and the rulers in Tehran are wary of making the same mistake.

The creation of the Islamic Revolutionary Guard Corps (IRGC) as a parallel security institution to the national army was meant primarily to protect the revolutionary regime and its leaders, thus preventing the army from accumulating too much power. Today, it is seen as a deep state that is a more powerful force than the army and has a vast business empire that plays a vital role in the country’s economy.

“The [current Iranian] regime knows that it was the military’s declaration of neutrality in 1979 that allowed the revolution to succeed,” said Ostovar. “They also know that acts of lethality fueled the fire of the protests.”

The violence in Iran today is reminiscent of the months preceding the 1979 revolution. Parsi says that uprising wasn’t a peaceful one either.

A similar cycle is playing out today on the streets of Iranian cities, but this time it is not the military but the police and its many specialized units that are cracking down on protesters. The multitude of security units tasked with cracking down on dissent works to dilute the potential impact of defection from any single force.

The Law Enforcement Command is the umbrella police body whose chief is directly appointed by the supreme leader. It has been “the leading force behind government crackdowns and has grown in importance since 2009,” when the country faced another major protest movement, Sanam Vakil, a senior research fellow for the Middle East and North Africa program at Chatham House think-tank in London. It was “restructured at the outset of this year, perhaps reflecting government concerns over the possibility of protests,” she said.

Under it falls the riot police, who according to Vakil isn’t meant to use lethal force and are more involved in dispersing crowds.

“The police are doing the lion’s share of counter-protest operations,” said Ostovar. “But we’ve seen IRGC officers on the ground as well, and plain clothes operatives could be coming from the Basij, IRGC intelligence, Ministry of Intelligence, or the police.”

The Basij is an Iranian volunteer paramilitary group that reports to the Islamic Revolutionary Guard Corps (IRGC). It is fiercely loyal to Iran’s hardline leadership and is often used to crack down on protests. Its personnel are often in plain clothes and tend to be violent, according to Vakil.

With so many different security groups overseeing the crackdown, it makes it more difficult for any single organization to amass power and turn against the Islamic Republic. Like in 1979, the crackdown today has been violent, but the security forces have not yet turned against the government.

“We are not seeing the degree and type of defections needed to put the regime’s survival in immediate danger. That can change, however,” said Parsi. “Unfortunately, [the violence] is likely to get much worse. The full capacity of the regime’s repression has likely not been seen yet.”

Turkey’s Interior Minister Suleyman Soylu said on Monday that officials believe Kurdish separatists from the Kurdistan Worker’s Party (PKK) and the Syria-based Democratic Union Party (PYD) were most likely behind the deadly blast that rocked Istanbul on Sunday. Soylu didn’t say how investigators reached the conclusion.

Bahrain said voter turnout was more than 70% in general elections on Saturday which rights groups criticized as being held in a climate of “political repression” after the Gulf state dissolved main opposition groups and quashed dissent, Reuters reported.

Strengthening trade ties and regional security will be priorities in an upcoming visit by Chinese leader Xi Jinping to Saudi Arabia, Saudi minister of state for foreign affairs Adel Al-Jubeir was cited by Reuters as saying on Saturday.

Mehran Karimi Nasseri had been living in Charles de Gaulle airport for years. Steven Spielberg bought his story to make the movie “The Terminal.”

Mehran Karimi Nasseri, the Iranian man who had lived inside the Paris-Charles de Gaulle airport for years and inspired Steven Spielberg’s 2004 film “The Terminal”, died Saturday at the same airport, a spokesperson for the airport told CNN.

Nasseri was pronounced dead by the airport medical team at Terminal 2F. He had “returned to live as a homeless person in the public area of the airport since mid-September, after a stay in a nursing home,” according to the spokesperson.

Nasseri, an Iranian refugee, was en route to England via Belgium and France in 1988 when he lost his papers and could not board a flight nor leave the airport until 2006.

While Nasseri’s story inside the airport was memorialized by Tom Hanks in the movie “The Terminal”, the spokesperson for the airport noted that: “The Spielberg film suggests that he was stuck in a transit zone at Paris-Charles de Gaulle. In reality, he spent several stays there, but always in the public area of the airport, he was always free to move around.”

The spokesperson added that Nasseri was an “iconic character” at the airport and that the “whole airport community was attached to him, and our staff looked after him as much as possible during many years, even if we would have preferred him to find a real shelter.”