For 41 days, thousands of Iranians have taken to the streets in anger over the death of a young Kurdish woman in police custody, even as authorities continue their violent crackdown against them. The demonstrations — honoring the memory of 22-year-old Mahsa Amini, whose Kurdish first name was Jina — have become the largest women’s rights movement in Iran’s recent history.

First chanted by mourners at Amini’s burial in her hometown of Saqez, the slogan quickly spread from the country’s Kurdish cities to the capital, Tehran. It took on new life in its Farsi translation — “Zan, zendegi, azadi” — and the message continues to reverberate across solidarity protests from Berlin to New York. Even fashion brands like Balenciaga and Gucci have posted the slogan to their Instagram feeds. People attend an anti-Iranian government demonstration in Berlin on Saturday, following the death of Mahsa Amini, who was also known by her Kurdish name, Jina, while in police custody. The slogan “Woman, life, freedom” is a translation of the revolutionary Kurdish slogan, “Jin, jiyan, azadi.”

The words “jin, jiyan, azadi” and their various translations have unified Iranians across ethnic and social lines. They have come to signify the demand for women’s bodily autonomy and a collective resistance against 43 years of repression by the Iranian regime.

But Kurdish activists say that some Iranians and the media are overlooking key elements of the Kurdish background of both Amini herself and the slogan pulsing through the mass protests sparked by her death.

“It’s meant to be a universal slogan for a universal women’s struggle. That was what was always intended with it,” says Elif Sarican, a London-based anthropologist and activist in the Kurdish women’s movement. “But the root needs to be understood, at the very least in respect towards the people who have sacrificed their lives for it, but also to understand what this is saying. … These aren’t just words.”

The slogan originated with the Kurdish Freedom Movement, led by the Kurdistan Workers’ Party (PKK), an armed group carrying out an insurgency against Turkish authorities since the 1980s. The State Department has long designated the PKK as a terrorist organization.

The slogan was inspired by the writings of Abdullah Ocalan, the PKK’s cofounder, who said that “a country can’t be free unless the women are free.”

Ocalan advocated for what he called “jineoloji,” a Kurdish feminist school of thought. That ultimately led to the development of an autonomous women’s struggle — the Kurdish women’s movement — within the broader Kurdish Freedom Movement, Sarican explains.

She says the slogan was first popularized during International Women’s Day marches across Turkey on March 8, 2006. Turkey, with about 15 million Kurds, is home to the largest population of Kurds in the Middle East. Although they make up an estimated 18% to 20% of the nation’s population, they face discrimination and persecution. 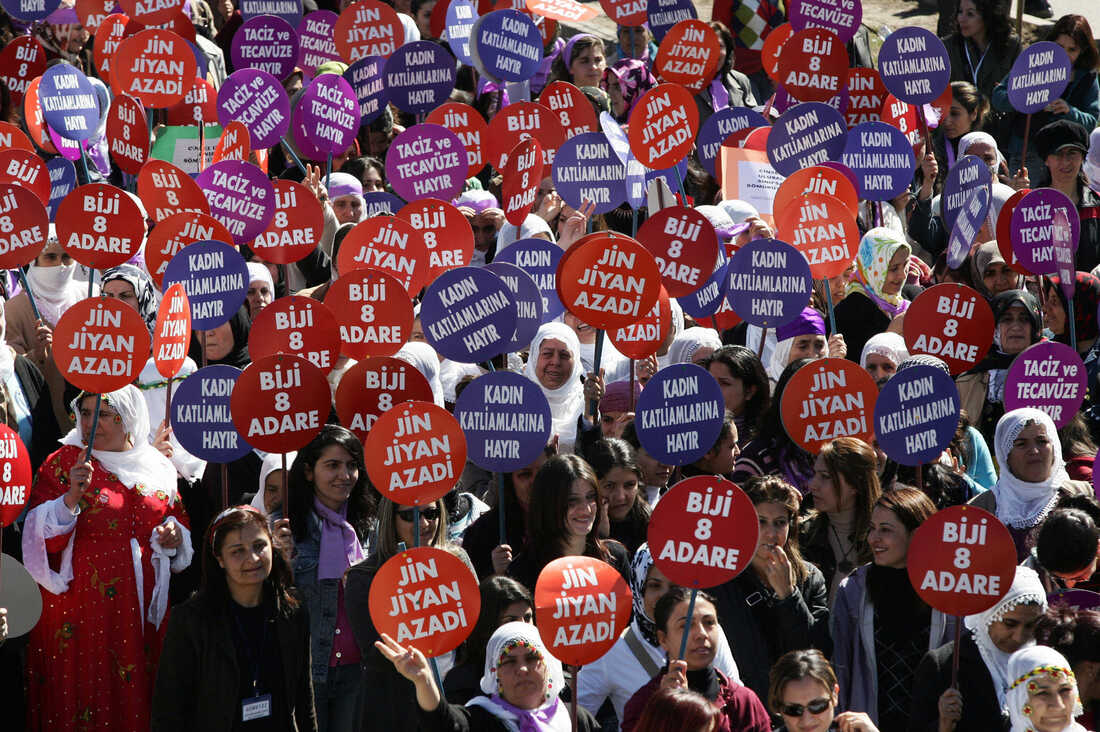 Since 2006, Sarican says, “Every year, based on ‘jin, jiyan, azadi’ as the philosophy of freedom, there’s been various different campaigns that have been announced and declared to the world by the Kurdish women’s movement on each 8th of March — to say that this is our contribution, this is our call and this is our encouragement for a common struggle of women against colonialism and patriarchal capitalism.”

Five years ago, Kurdish female guerrilla fighters with the YPJ militia chanted the slogan during the Kurdish-led Rojava revolution in northern Syria that began in 2012.

Kurds in Iran face discrimination and many live in poverty

That’s also been the case in international coverage of Amini’s death, they contend, in which Mahsa — Amini’s Iranian state-sanctioned first name — is used. In interviews, Amini’s parents have used both her Iranian and Kurdish names.

Like many Kurds in Iran, Amini was not allowed to legally register her Kurdish name, which means “life.”

“I felt like she died twice because no one really was mentioning her Kurdish name or her Kurdish background, which is so relevant,” says Beri Shalmashi, an Amsterdam-based Iranian Kurdish writer and filmmaker. 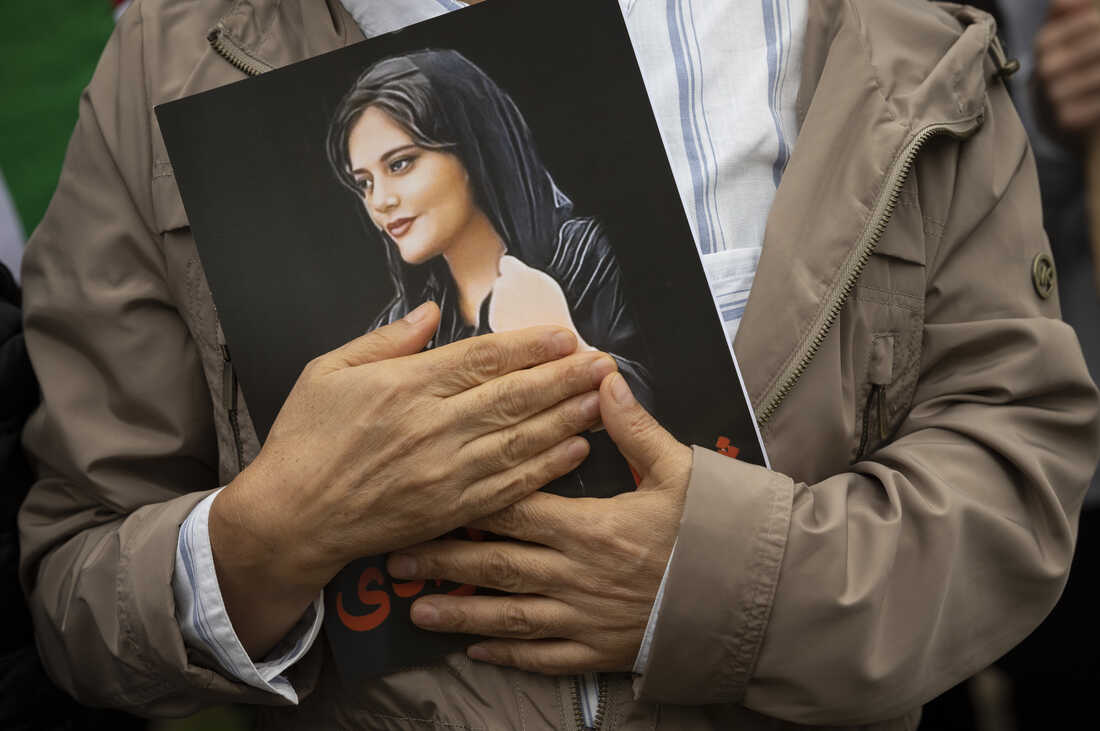 A portrait of Mahsa Amini, who was also known by her Kurdish name, Jina, is held during a rally calling for regime change in Iran in Washington, D.C., on Oct. 1.

Besides facing ethnic discrimination, Kurds, who make up an estimated 15% of Iran’s population, are marginalized as Sunni Muslims in a Shia-majority country. Their language is restricted and they account for nearly half of political prisoners in Iran. The country’s Kurdish regions are also among its most impoverished.

The Iranian government has blamed Kurds for the current unrest in Iran, according to news reports, and has attacked predominantly Kurdish cities, like Sanandaj and Oshnavieh. Some Persian nationalists, meanwhile, continue to ignore the lived experiences of Kurds in the country.

Shalmashi believes it’s vital to highlight Amini’s Kurdish identity, and the Kurdish roots of “jin, jiyan, azadi,” as a reminder of the need for greater rights for all people in today’s Iran — no matter their ethnicity or gender. Without inclusion and unity, she warns, the current protests risk becoming meaningless.

“Because if you don’t make room for people to be in this together,” she says, “then what are you going to do if you even succeed?”