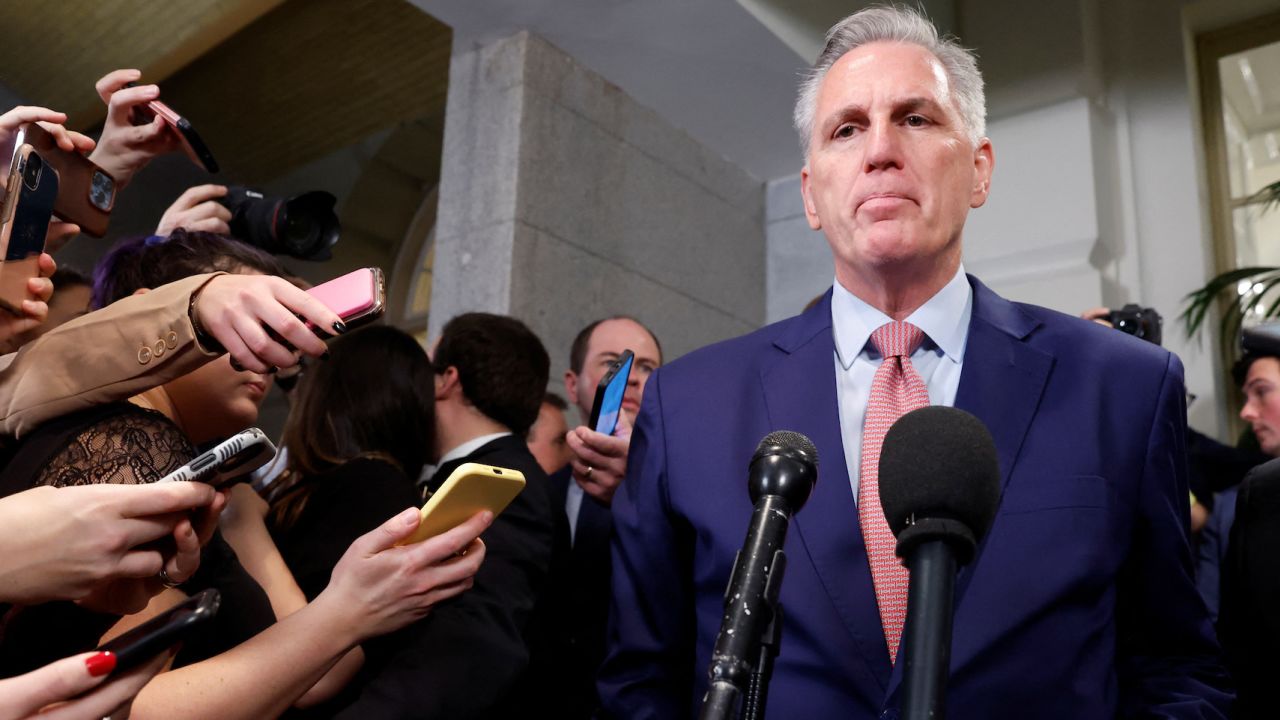 Kevin McCarthy is so desperate to be speaker, he’s ready to gut his own power just to get the job.

The California Republican unveiled major concessions on Wednesday evening after he was stung by right-wing radicals who blocked his bid for power in six humiliating votes – a farcical debut for the new GOP-led House.

The moves – just proposals for now that have not been agreed upon – could not only enshrine the chaotic instability of the tiny new Republican majority, they could also make him a permanent hostage of his party’s most extreme voices. And a neutered speaker unable to force his members into hard votes could have grave implications with Congress facing critical decisions later this year, including a need to raise the government’s borrowing limit – a duty that if not fulfilled could pitch the US and global economies into crisis.

CNN’s Manu Raju and Melanie Zanona reported late Wednesday that McCarthy had agreed to a rule change that would allow a single member to call for a vote to oust a sitting speaker, according to two sources familiar with the matter. The top Republican also agreed to more power for the far-right Freedom Caucus, which would help shape how and when bills get to the floor. The concessions are likely to concern many more moderate members of the incoming majority, who fear their electorates in swing seats will be turned off by more extremism.

The proposals surfaced after the new House majority finally agreed on something Wednesday: following another day of feuding and insults, they narrowly voted to adjourn their futile search for a speaker until Thursday.

Cheers that erupted from Republican benches when the vote closed reflected the risible state of the House’s new GOP management, which is unable to perform the only task it currently has – choosing a leader – and is holding up the functioning of the chamber.

The idea that a fresh new majority is riding into town to do the American peoples’ business is in tatters. The mess in the new House on Tuesday and Wednesday suggested that every tough vote, and even easy ones, in the new House could be gummed up by the reality of a dysfunctional majority when small groups of members could shut the chamber down.

On one side is McCarthy, who is refusing to cede his personal aspirations for power despite growing evidence he may never win the votes he needs in his own party. Even if he does squeak through after caving repeatedly to his critics, he will be a fatally weakened speaker.

“The country or Kevin McCarthy. Which should have more weight?” said recently retired GOP Rep. Adam Kinzinger of Illinois, who is now a CNN political analyst.

On the other side is a band of right-wing zealots, holding their party, the House and the country hostage – some with no clear objective other than to destroy the idea of governance itself. For them, chaos is the point.

“He’s a desperate guy whose vote share is dropping with every subsequent vote and I’m ready to vote all night, all week, all month, and never for that person,” Matt Gaetz, the Florida congressman leading the “Never Kevin” caucus, said.

But as humiliation piled on humiliation for the California lawmaker, there was the merest hint of a lifeline as a divide inside the anti-McCarthy block began to open.

Several lawmakers who want far-reaching changes to the way the House works reported genuine progress in talks with McCarthy. One of their number, Texas Rep. Chip Roy, predicted he could bring over 10 votes if the talks pan out.

Still the math looks tough for McCarthy since the Gaetz bloc is holding firm and McCarthy can only afford to lose four GOP votes and still win the speakership.

Even as he nurses hopes that intense talks with rebels could still provide a narrow path to victory, pressure is building inexorably on McCarthy.

The question is whether another day of pointless voting on Thursday will prompt members to begin to consider whether he should step aside for a more universally trusted colleague – perhaps Rep. Steve Scalise of Louisiana, for instance. Many Republicans are complaining that their hopes for quickly wielding power and throttling the Biden administration have been dashed.

While another Groundhog Day in the House didn’t produce a new speaker, it did offer hints on how an endgame in the battle for the speaker’s gavel may develop. It also provided insight into the new balance of power in Washington and how Congress will work (or won’t) in the months ahead.

What is McCarthy’s next move?

If the Republican leader cannot demonstrate progress when the House meets for yet another vote on the speaker on Thursday, he will be in deep trouble. After just staving off what would have been a humiliating roll call vote on Wednesday evening, it emerged that McCarthy had made yet more concessions.

McCarthy also met Roy, a holdout who has been demanding changes to the procedures that govern House business, and freshman members among the 20 or so Republicans who have been voting against him. GOP Rep. Mike Gallagher of Wisconsin, who is supporting McCarthy, said that the 20 lawmakers who opposed the would-be speaker were split into two groups – those who want substantive rules changes and those who just don’t like the longtime GOP leader.

“If it’s the latter, it’s not as constructive because it shouldn’t be about the personality, it should be about the process, but I don’t know. I have no sense of how many are in either camp,” he told CNN.

But sources also admitted that the new proposals, even if accepted, would not win over all the holdouts McCarthy needs. And the continuing brouhaha raises a deeper question of why the GOP leader, who has had weeks to get his majority solidified, still cannot get it done. Any incoming speaker who has proven so incapable of getting his coalition in line will be perennially at risk of being swept out of office.

What is so wrong with debate anyway?

In impassioned floor speeches and interviews, Roy has argued that the House is finally having consequential debates. Under recent Democratic and Republican speakers, normal order and the sequencing of new laws through the committee process and debates on the House floor have been curtailed as severe partisanship and gridlock causes leaders to enforce ruthless party-line discipline.

Often, multiple funding bills on everything from farming to defense and transportation to space are lumped together in massive end-of-year omnibus bills like the mammoth $1.7 trillion spending package that Congress finally passed in December. Multiple Republican members appeared on CNN on Wednesday making reasoned arguments about the need to mend a broken institution, to open the House’s business to the public and to conduct a proper appropriations process through committees with time for full debates, budget assessments and amendments.

“I really think this is democracy in action,” North Carolina Republican Rep. Dan Bishop told CNN’s Jake Tapper. “If you are not satisfied with Washington as it is, then you can’t just be satisfied doing the same thing.”

The problem, however, is that Congress has resorted to omnibus bills in recent years for a reason – it has been so polarized and dysfunctional that the only way to get any bill to the president’s desk is to cram all the spending in together.

So while well intentioned, the aspirations for reform could just cause more dysfunction.

How to talk to the chaos caucus

The other block of anti-McCarthy votes looks a lot harder to sway. The likes of Gaetz, Reps. Lauren Boebert of Colorado, Bob Good of Virginia and Ralph Norman of South Carolina appear no closer to voting to make him speaker.

“I’m not going to support Kevin,” another holdout, Rep. Andy Biggs of Arizona, said on Wednesday, reinforcing his hard no position.

Apart from securing a concession from McCarthy that would make him almost a toothless speaker – with the return of a rule that would allow any member to call for a vote to unseat him – it’s not often clear what these members want. Or if there’s anything that McCarthy could give them that would change their minds.

Some Republicans accuse their colleagues of grandstanding and of using the spotlight to raise campaign cash and to drum up appearances on conservative media. If there’s a philosophical grounding to the opposition, it’s as the latest expression of the longtime anti-establishment wing of the GOP that seeks to neutralize government itself.

This politics of destruction was sent into overdrive by ex-President Donald Trump, with his vows to drain the Washington “swamp.” And it was expressed most eloquently by Steve Bannon at the start of the Trump administration as “the deconstruction of the administrative state.” The problem for McCarthy – who has cozied up to Trump and often appeased the zealots – is how to negotiate with someone whose main aspiration is chaos.

No one is scared of Trump anymore

The elephant wasn’t in the room.

Early on Wednesday, Trump delivered the kind of full-throated endorsement of McCarthy that the Californian must believe he was owed after his obsequious support of the ex-president following the January 6, 2021, insurrection.

“VOTE FOR KEVIN, CLOSE THE DEAL, TAKE THE VICTORY,” Trump wrote on Truth Social. “REPUBLICANS, DO NOT TURN A GREAT TRIUMPH INTO A GIANT & EMBARRASSING DEFEAT.”

It was the kind of social media blast that once would have had Republican members leaping into line. But no longer. It didn’t appear to change a single vote.

“I disagree with Trump. This is our fight. This isn’t Trump’s – and I support Trump. I disagree with it. Kevin is the one who’s going to censor him,” Norman said. In another sign that Trump’s spell may have broken, Boebert said that her “favorite president” had called rebels opposing McCarthy and told them to knock it off.

“I think this needs to be reversed, the president needs to tell Kevin McCarthy that, ‘Sir you do not have the votes and it’s time to withdraw.’”

Her rebuke was the latest sign that after two years in political exile, a disastrous intervention in the midterms and a low energy 2024 campaign launch, Trump’s juice isn’t what it once was in GOP ranks in the House. While the ex-president’s rapport with the Republican base surely remains intact, this kind of insubordination is unlikely to have gone down well in Mar-a-Lago.

The spectacle in the House on Wednesday had more in common with the chaos and recrimination that unfolds in parliaments in Europe or Israel, where it can sometimes take weeks or months to arrive at a leader or governing majority, than in the US House, where the vote for speaker is normally a formality.

And this is just not some internecine struggle. The speaker is, after all, second in the line of presidential succession behind the vice president.

“It’s embarrassing for the country,” President Joe Biden said on Wednesday, as he capitalized on the chaos in an event in Kentucky highlighting bipartisan political leadership over his massive infrastructure package, appearing with Senate Republican leader Mitch McConnell.

“I’m not making a partisan (point), that’s the reality – that to be able to have a Congress that can’t function is just embarrassing.”