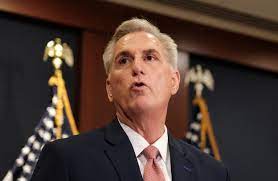 No matter how they resolve Tuesday’s vote choosing the next speaker of the House, Republicans appear poised to double down on the hard-edged politics that most swing state voters rejected in last November’s midterm election.

Stubborn conservative resistance to House GOP Leader Kevin McCarthy has put the party at risk of precipitating the first speakership election that extends to more than a single ballot since 1923 – and only the second since the Civil War. But even if McCarthy ultimately prevails, the show of strength from the GOP’s conservative vanguard has ensured it enormous leverage in shaping the party’s legislative and investigative agenda. And that could reinforce the image of extremism that hurt Republicans in the midterm election, especially in the key swing states likely to decide the next presidential contest – Michigan, Pennsylvania, Wisconsin, Georgia and Arizona.

Whoever Republicans ultimately select as speaker “will be subject to the whims and the never-ending leveraging of a small group of members who want to wield power,” said former GOP Rep. Charlie Dent, a CNN political commentator. “You’re going to have this group on the far right that is going to continue to push the leadership to go further right on issues.”

Tuesday’s vote may create a kind of drama that was common in the House during the 19th century but has virtually disappeared since. Before the Civil War, when party allegiances were more fluid, the House failed to elect a speaker on the first ballot 13 times, according to the House historian’s office. The most arduous struggles occurred in roughly the decade before the Civil War, as the existing party system crumbled under the pressure of the escalating conflict between the North and South, and the newly formed Republican Party supplanted the Whigs as the major competitor to the Democrats, then the dominant party. One speakership election during that tumultuous decade required 133 ballots (and two months of balloting) to resolve; the final speaker selection before the Civil War began took 44 ballots.

Since then, the only selection that has required more than a single ballot came in 1923, when Republicans holding only a narrow majority comparable to their advantage this year took nine ballots to select their speaker. Then the complication was that a minority of left-leaning progressive Republicans initially resisted conservative incumbent Speaker Frederick Gillett.

Today McCarthy faces resistance from the opposite pole of his caucus-a circle of hard-right conservatives who have pledged not to support him, at least on the first ballot. Many in the party establishment still believe that even if conservatives initially block McCarthy, he will ultimately succeed – largely because there is no other alternative likely to draw broader support across the party.

“I think he prevails because there is no other candidate with his experience and fundraising ability and at the end of the day the party base will close ranks because nothing happens until you have a Speaker: No investigations… nothing,” former GOP Rep. Tom Davis, who served as chair of the National Republican Congressional Committee, wrote me in an email. “And the vast majority of the Conference is loyal to him.”

But whether or not McCarthy ultimately claims the prize, the difficulty he’s faced securing the votes makes clear that whoever the GOP selects as speaker will be operating on a very narrow ledge and subject to constant threat of revolt from an aggressive conservative wing. That was the formula that ultimately led to premature retirements by the previous two GOP speakers, John Boehner and Paul Ryan. McCarthy “is in a tough spot, as was Boehner and Ryan,” Davis notes. Dent believes a Speaker McCarthy would face an even more precarious situation than those two predecessors because “there are more of the ultra-MAGA types than they were then” while the party’s overall margin in the House “is smaller.”

Operating on such a tight leash, McCarthy (or whoever else the GOP eventually chooses) seems highly unlikely to exert much discipline on the party’s militant conservative vanguard. He’s already signaled deference in multiple ways to the party’s most conservative members. Among them: McCarthy has promised to restore committee assignments for Reps. Marjorie Taylor Greene and Paul Gosar, who Democrats stripped of such assignments after they embraced violent imagery and rhetoric. (Greene in particular has emerged as a critical ally for McCarthy as he tries to secure enough conservative votes to lock down the speakership.) McCarthy reportedly has agreed as well to drastically lower the number of members required to force a vote on ousting the speaker at any point.

McCarthy also pledged an aggressive investigative agenda against the Biden administration that will highlight conservative priorities such as Hunter Biden’s business activities, and the treatment of the January 6, 2021, rioters. The Wall Street Journal reported that McCarthy has also acceded to conservative demands for a panel that will launch far-reaching probes on alleged politicization of the Justice Department and FBI. (The panel, the Journal reported, will be established under the Judiciary Committee as the “Select Subcommittee on the Weaponization of the Federal Government.”) McCarthy likewise has left open the door to pursuing impeachment against Department of Homeland Security Secretary Alejandro Mayorkas.

Dent, like Davis, believes that aggressive investigation will produce worthwhile revelations, including some that are inevitably uncomfortable for the Biden administration. But Dent acknowledges the potential for the hearings to backfire on Republicans if they appear shrill or focused on far-right grievances and conspiracy theories. “It’s the way you do things and the tone that matters,” Dent says. “You can find all sorts of issues they are going to want to jump on that … won’t play well [with the public]. The speaker is going to be in this position to have to mediate these disputes constantly.”

As telling as what McCarthy has said has been what he has not said. He’s remained utterly silent on the scandals enveloping incoming GOP Rep. George Santos of New York (who Greene has vociferously defended) and the revelations in the final report from the January 6 committee that multiple members of the GOP caucus were intimately involved in then-President Donald Trump’s campaign to overturn the 2020 election. (The committee especially singled out incoming House Judiciary Committee Chairman Jim Jordan as, in its words, “a significant player in President Trump’s efforts.”)

Whether McCarthy wins the speakership, or conservatives (in a less likely scenario) succeed in installing an alternative to his right, Democrats believe all these early markers guarantee that the House GOP’s most militant members will be front and center in defining the party over the next two years.

“In some ways, win or lose [for McCarthy] it doesn’t matter,” says Leslie Dach, a senior adviser to the Congressional Integrity Project, a Democratic-aligned group established to respond to the coming House investigations of the Biden administration. “I think the die on the next two years has been cast by giving these people the power and the podium.”

By ensuring that hardline Trump allies such as Jordan and Greene will be highly visible – and authorizing them to pursue conservative grievances like the charge that the FBI has become “weaponized” against the right – Dach and other Democrats believe the House majority will reinforce the GOP’s image as the party of Trump precisely as more party strategists, donors and elected officials are insisting Republicans must move beyond him.

“The real show is going to be these empowered, extreme MAGA types,” Dach insists. “Every day that they are on a committee, every day they are on television, is a bad day for the entire Republican Party.”

In some respects, McCarthy’s early signs of deference to the right only reflect the balance of power inside his caucus. The vast majority of House Republicans, in fact, represent “Trump country” – districts outside of the nation’s major metropolitan areas where the former president ran strongly in 2020. Fully 170 of the House Republicans, roughly three-fourths of the total, hold seats that Trump won by at least 10 percentage points two years ago.

But in bending to the confrontational and culture war politics preferred by those members, McCarthy is ensuring problems for the 18 House Republicans who won districts that voted for Biden in 2020. More than half of those are in New York and California alone – states where the turnout in the presidential year of 2024 will likely favor Democrats more than in 2022.

McCarthy (or whoever else wins the speakership) is also ignoring the clear signs of resistance to the right’s agenda that emerged last November in the most closely contested swing states. Despite widespread discontent over the economy and President Joe Biden’s performance, Democrats in November beat every Trump-aligned gubernatorial and US Senate candidate in the five states that decided the 2020 election by flipping from Trump to Biden: Arizona, Georgia, Michigan, Wisconsin and Pennsylvania. (The only Republicans who won such contests in those states were incumbents who had an identity independent of Trump, Georgia Gov. Brian Kemp and Wisconsin Sen. Ron Johnson.)

Michael Podhorzer, the former political director of the AFL-CIO, notes that the GOP has cumulatively lost enormous ground in those states since Trump took office.

“When he made his inauguration speech [in 2017], there was only one Democratic governor in those five states, only four Democratic Senators, no speaker of the state assembly or majority leader in the senate in those states,” says Podhorzer, now chairman of the board of the Analyst Institute, a consortium of liberal groups. “In a month, four of the five states will have Democratic governors, 9 of the 10 Senators are Democrats, and three of the state legislative chambers are led by Democrats.” Since 2016, he adds, Democrats in those places “have done nothing but win because those states are not going to elect MAGA” Republicans.

Looking more broadly, Podhorzer concluded in a new analysis that the midterm election demonstrated resistance to Trump-style politics across a broad range of competitive states. Podhorzer calculated that in the key House, Senate and gubernatorial races across the 15 states with the most competitive statewide contests involving candidates clearly identified with a Trump-style agenda, Democrats largely matched or even exceeded their 2020 margins – a remarkable showing during the first midterm election for the party holding the White House. By contrast, the party suffered the usual midterm reversals across the other states.

“It was two midterms happening at the same time – depending on whether you were in a place where that new bubble of Democratic voters believed they had to come out to beat MAGA again,” Podhorzer argued.

The dynamics of the GOP leadership struggle that will culminate Tuesday has now virtually ensured that the House will spend two years amplifying the Trump-style politics that produced that bifurcated result.

That’s unlikely to create many problems for Republicans in the places where they are already strong. In the midterm, Republicans, as I’ve written, mostly consolidated their control over red-leaning America, easily holding governorships and state legislatures in many of the states (such as Florida, Texas, Iowa and Tennessee) that pursued the most aggressive conservative agendas over the past two years.

But the prominent role for the right already evident in the incoming Republican House risks further identifying the party with the politics that repelled so many voters across the key swing states the GOP must reclaim to recapture the White House in two years. If McCarthy only gains the speakership by unleashing the most militant voices in his caucus, his victory could quickly prove Pyrrhic for the GOP overall.