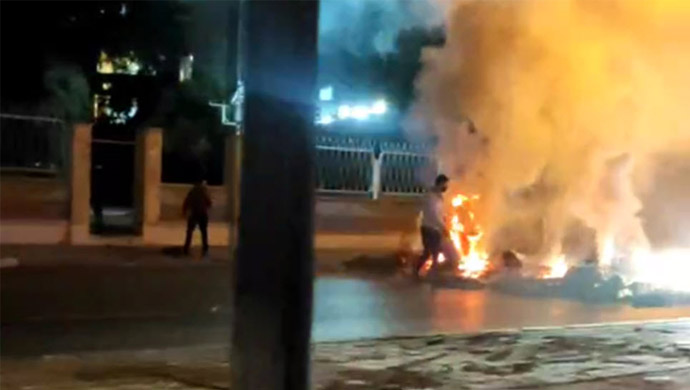 Iran’s regime has been launching new waves of arrests and militarizing epicenters of anti-regime unrest in its latest measures against the Iranian people’s ongoing protests.

Iran’s nationwide uprising is marking its 112th day on Thursday as the regime’s crackdown machine, including the Revolutionary Guards (IRGC), the paramilitary Basij units, State Security Forces (police), and plainclothes agents, backed by units from the Intelligence Ministry, have been busy arresting dozens of people in different cities, including Javanrud, Semirom, and Zahedan.

Various reports from across Iran indicate that regime Supreme Leader Ali Khamenei has decided to up the ante in his war against the Iranian people. This goes parallel to dozens of death sentences issued for people arrested for practicing their God-given right of protesting and demonstrating the ruling mullahs. The entire regime is desperate to bring an end to the nationwide uprising while the Iranian people are determined to continue this unprecedented campaign of continuous protests against the regime in its entirety.

Protests in Iran have to this day expanded to at least 282 cities. Over 750 people have been killed and more than 30,000 are arrested by the regime’s forces, according to sources of Iranian opposition People’s Mojahedin Organization of Iran (PMOI/MEK). The names of 614 killed protesters have been published by the PMOI/MEK.

On Thursday reports from various cities across the country show that people have been holding ceremonies in memory of protesters killed by the mullahs’ regime. These gatherings were held in the cities of Mahabad, Sanandaj, Izeh, Karaj, Ilam, Ashkzezar in Yazd Province, and Kangavar where people were seen chanting anti-regime slogans and protesting the mullahs’ dictatorship.

Protesters in Izeh, southwest Iran, rallied on the 40th day of the murder of Hamed Salahshour by regime security forces. Protesters were seen chanting: “This is the year Seyed Ali (Khamenei) is overthrown!”

A similar gathering was reported in the city of Sanandaj, the capital of Kurdistan Province, where locals gathered at the grave of Mohammad Shariati today marking his birthday and condemning the mullahs’ regime for their atrocities against the Iranian people.

Today is also the birthday of Mohsen Ghaysari, a local killed by regime security forces. Locals in the city of Ilam, western Iran, gathered to voice their protests against the mullahs’ regime.

In Mahabad, a restive city in northwest Iran, locals rallied to mark the 40th day of the murder of Shuresh Niknam by regime security forces while emphasizing that “Martyrs don’t die!”

On Wednesday, in the city of Semirom in Isfahan Province, central Iran, reports indicate that regime authorities have imposed martial law, according to local activists. Internet connections are heavily disrupted, and many people have been arrested at nights, reports indicate, with footage becoming available online with at least a 24-hour delay.

In the restive city of Javanrud in Kermanshah Province, western Iran, reports showed that regime authorities dispatched many security units to the city’s judiciary building and were installing security cameras at various areas. Officials are concerned of further protests by locals and are even preparing for possible attacks against various administrative buildings.

In other reports, workers and employees of the Ilam Petrochemical Company went on strike on Wednesday demanding answers to their dilemmas which have been raised with officials for some time now. They first held a gathering at the company plant and then moved their rally outside the local governor’s office.

In the city of Zahedan in Sistan & Baluchestan Province, southeast Iran, authorities flooded the city’s Kowsar Street and began arresting dozens of locals on Wednesday. Reports indicated similar arrests near Towhid Mosque and a nearby football field.

Iranian opposition coalition NCRI President-elect Maryam Rajavi once again called on the international community to take urgent action to stop executions in Iran and save the lives of thousands of death row inmates in the regime’s prisons across the country.

“I urge the United Nations and its Member States to condemn the executions in Iran by taking immediate action to save the death row prisoners. The dossier of flagrant and systematic violations of human rights in Iran must be referred to the United Nations Security Council,” the NCRI President-elect emphasized.