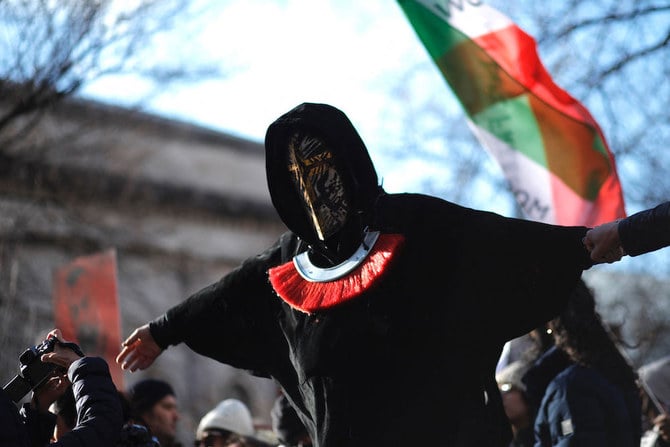 TEHRAN: Iranian authorities have arrested a journalist who published interviews with families of death row inmates sentenced in connection with nationwide protests, the reformist daily Etemad said Friday.
Fourteen Iranians have been sentenced to death in connection with the unrest triggered by Mahsa Amini’s death in custody on September 16.
The 22-year-old Iranian Kurd had been arrested by morality police in Tehran for an alleged breach of the Islamic republic’s dress code for women.
“Mehdi Beikoghli, head of the political service at Etemad daily, was arrested last night,” the newspaper said on its website.
In recent weeks the journalist, the latest news worker to be arrested in Iran, interviewed several families of people sentenced to death over the protests.
Two men, both aged 23, were executed last month in connection with the demonstrations which Iranian authorities call “riots.” Twelve others have been sentenced to hang, according to an AFP tally based on official statements. Half are awaiting retrial.
Foreign-based rights groups and campaigners say dozens more protesters face charges punishable by death.
“His wife wrote on Twitter that Mehdi’s cellphone, computer and personal belongings were seized during the arrest,” Etemad said.
Shargh, another reformist newspaper, published in December a list of nearly 40 journalists and photojournalists held in connection with the protests.
One is Shargh journalist Niloufar Hamedi who, along with Elaheh Mohammadi from the Ham Mihan newspaper, helped expose the case of Amini by respectively reporting from the hospital and her funeral. Both have been held since September.
Local media have since reported the arrests of several other journalists.
Iran’s top security body reported last month that more than 200 people, including security force members, have been killed since the protests began. Judicial authorities have reported charges against more than 2,000 people.