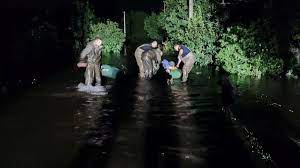 Russian forces have attacked energy and water infrastructure facilities in the central Ukrainian city of Kryvyi Rih, according to a local military official.

Vikul said there were no casualties, adding that water supply had been restored across the city but work on restoring electricity was ongoing.

Ukraine has been facing a wide assault on critical infrastructure and power sources since early October.