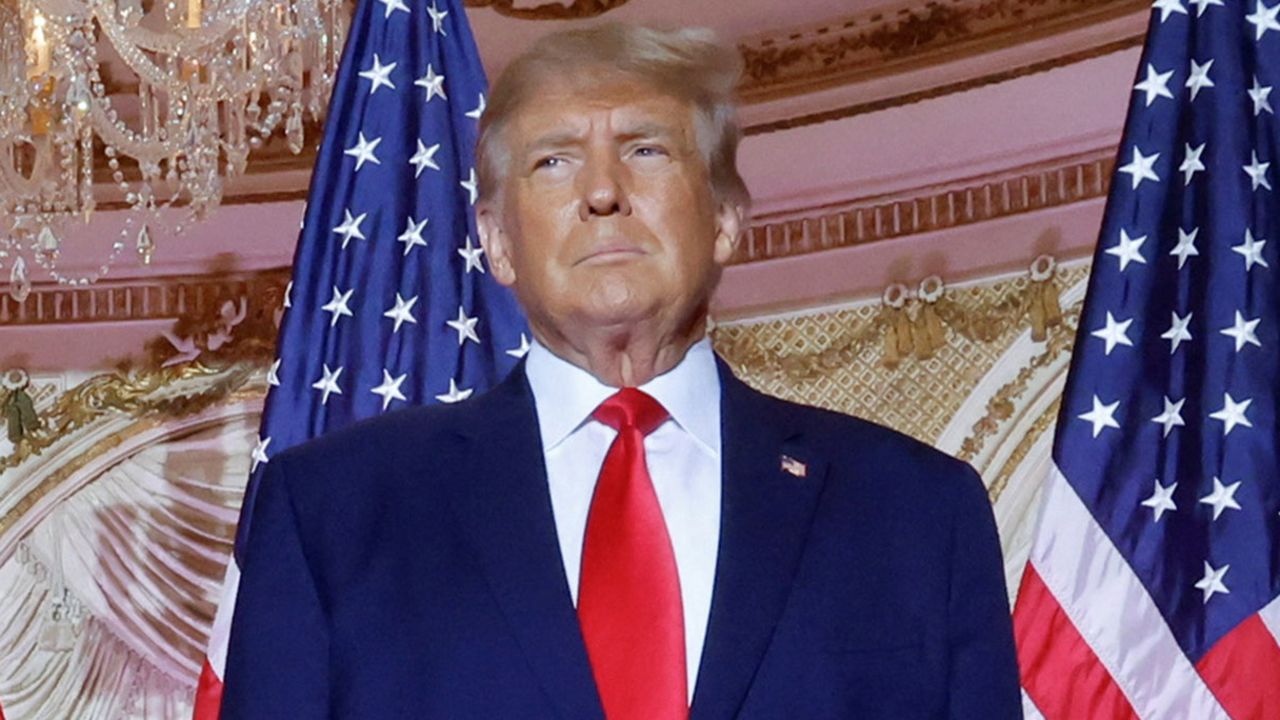 Donald Trump’s meeting with a Holocaust-denying extremist is finally drawing significant GOP criticism and casting doubt on his political viability following the tepid launch of his 2024 campaign.

Some Republicans, albeit tentatively and often with self-protecting caveats, are beginning to test whether the political incentives for criticizing the ex-president could outweigh the hazards. This trend is obvious in reactions from ex-Vice President Mike Pence and some top lawmakers over Trump’s dinner at his Florida resort last week with White supremacist Nick Fuentes. It was also visible earlier this month in critiques of the ex-president after many of his election-denying, neophyte candidates flamed out in the midterm elections and suggested that he could again doom Republicans in a general election in 2024.

At the same time, however, the growing clout of radical, pro-Trump members of the new House majority, which takes over in January – and the reality that GOP leader Kevin McCarthy’s hopes of being speaker may rely on Trump’s patronage – demonstrates his still robust influence. And fear of Trump is still so strong in some sectors of the GOP that some senators who want to have a political future are still not willing to condemn his outrages to journalists in the corridors of the US Capitol. Even if it should be a no brainer to trot out an unequivocal criticism of a White supremacist – especially one who was on the Capitol grounds on January 6, 2021, and promoted Trump’s unsubstantiated claims about 2020 election fraud. Fuentes was also subpoenaed by the House select committee probing the insurrection and his presence at Trump’s Mar-a-Lago resort last week suggests that the ex-president remains unapologetic about his incitement of a revolt on democracy nearly two years ago.

Still, the split in the GOP will be watched for how much it becomes an indicator of key figures and donors ready to pass on Trump’s chaos, scandal and extremism. It also could signal that after his underwhelming campaign announcement two weeks ago, the former president is struggling to stir momentum or to overcome liabilities exposed by his loss in 2020 and his disastrous role in the 2022 midterms. Trump’s decision to spend time with people who espouse antisemitism, like Fuentes and another dinner partner – rapper Kanye West, who has legally changed his name to Ye – raised questions about the ex-president’s capacity to draw more publicly acceptable associates.

Then again, there’ve been multiple false dawns when a party that often looked ready to ditch Trump fell back into line because of the power of his bond with its base.

The most unequivocal criticism of Trump’s meeting with Fuentes came from Pence, who often stood by admiringly when his boss smashed norms in office – until he broke with the ex-president’s scheme to steal the 2020 election in Congress.

“President Trump was wrong to give a White nationalist, an antisemite and Holocaust denier a seat at the table, and I think he should apologize for it,” Pence told NewsNation in a clip released on Monday. “He should denounce those individuals and their hateful rhetoric without qualification,” Pence said, slamming Trump’s “profoundly poor judgment in giving those individuals a seat at the table.”

Pence’s courageous refusal to play along with Trump’s attempt to block Congress’ certification of President Joe Biden’s 2020 election win effectively made his future political choices for him. Any successful presidential run by the former vice president will only unfold in a post-Trump GOP. So that’s the political lane he’s seeking to widen with his comments. And while those comments are principled and more acute than those of most other Republicans, they are not free of political calculation. Pence, who would still need to appeal to his former boss’ base, also made clear he did not think Trump was a bigot.

Jason Greenblatt, White House envoy to the Middle East in the Trump administration, wrote of the dinner in a CNN op-ed published on Monday: “It should not have happened. Period.” Greenblatt noted that he’d seen the former president “speak strongly against antisemitism” and be an “incredible friend to Israel” before calling on him to condemn Fuentes and West. “People like Fuentes are dangerous to the United States. The President Trump that I know would recognize that and issue this condemnation.”

Georgia Republican Gov. Brian Kemp, who refused to permit Trump’s election-stealing efforts in his state and is seen as an increasingly influential national figure after winning reelection earlier this month, also criticized the ex-president, suggesting there is now sustainable political ground for bucking the former president. “That was a bad decision. There’s no place for that in the Republican Party,” Kemp told CNN’s Kaitlan Collins in an interview that will air on “CNN This Morning” on Tuesday.

Criticism from a safe space

Another category of Republicans willing to be direct about the Fuentes meeting are those who may be electorally safe, do not face a primary in the near future and have some independent power base that doesn’t rely on Trump.

Senate Republican Whip John Thune, for example, who has criticized the ex-president in the past, said Trump’s meeting with Fuentes was “a bad idea on every level” and that he hoped whoever was advising the ex-president “got fired.”

Another top GOP senator, John Cornyn of Texas, said: “It’s bad – there’s no question about it.”

Sen. Joni Ernst of Iowa said the whole thing was “ridiculous,” while Sen. Shelley Moore Capito of West Virginia also thought it “ridiculous” anyone would associate with guests with such views.

These are strong comments about Trump from powerful figures who have an interest in reshaping their party. But they hardly represent profiles in courage. The terms of Cornyn, Ernst and Capito end in 2027. And Thune was reelected to a new six-year term earlier this month.

Criticism with an off ramp

Some Republicans talked tough – but also offered themselves a safety ramp by refusing to condemn Trump’s character or quickly pivoted to a criticism of Democrats. These include Florida Sen. Marco Rubio, who cozied up to the ex-president in his successful reelection run this year and may also have ambitions to run again for the White House.

Rubio slammed Fuentes as “a purveyor and a spreader of an evil poison.” He also told CNN he hoped that Trump would condemn Fuentes in a way that made it clear the Florida senator was not directly taking aim at the ex-president.

“I hope he will. Because I know he’s not an antisemite. I can tell you that for a fact that Trump is not, but this guy (Fuentes) is evil.”

Kentucky Rep. James Comer, who will be a powerful figure in the next Congress as the expected Republican chair of the House Oversight Committee, was also critical of Trump – but tried to deflect the heat toward Democrats including Minnesota Rep. Ilhan Omar, who faced criticism from within her party in 2019 for what many colleagues regarded as antisemitic rhetoric.

“Obviously, I condemn it,” Comer said of Trump’s dinner with Fuentes in an interview with CNN’s Jake Tapper on Monday.

“And I can shed some light on why Republicans don’t immediately respond to many in the media every time they’re offended by something Trump does, is because a lot of Republicans believe there’s a double standard in the media. We have seen things that Ilhan Omar has said. We don’t get asked if we condemn that by the mainstream media.”

Lawmakers seen as close to Trump or who owe him for his support expressed banal semi-condemnations that won’t get them in trouble with fiercely pro-Trump voters in their states.

Alabama Sen. Tommy Tuberville said that Trump could “make better choices” and that “probably we all make mistakes.”

South Carolina Sen. Lindsey Graham has suggested that his own influence in Washington depends on his closeness to Trump. “No, you don’t want to give oxygen to people like that,” Graham said, before accusing reporters of double standards for not raising questions when “Democrats hang out with (Nation of Islam leader Louis) Farrakhan.”

Missouri Sen. Josh Hawley, a possible future GOP presidential hopeful, said: “It’s a free country, you can do whatever you want, but I’m not a big fan of giving people who say they hate Jews, hate Israel, giving them a platform.”

While some Republicans were willing to go on the record criticizing Trump it was notable that many only did so when they were asked days after the dinner when they returned to the Capitol after the holiday weekend. And plenty of party leaders have yet to disavow Trump’s meeting with Fuentes. This includes Florida Gov. Ron DeSantis, who is touted by many in his party as a possible alternative nominee to Trump. While DeSantis is now a prominent national figure who might be expected to weigh in on such matters, he probably has little political interest in triggering an immediate public showdown with the former president at this point.

And McCarthy, who may well need Trump’s support to win sufficient Republican votes to become speaker in January and who criticized Trump over the Capitol insurrection only to quickly head down to Mar-a-Lago to make amends, has also been silent so far.

The next time he’s on camera, the California Republican will face a fresh choice about how to handle Trump’s excesses. His answer may reveal a lot about his ambitions, the future direction of the GOP and Trump’s remaining clout despite his most recent transgression against decency.