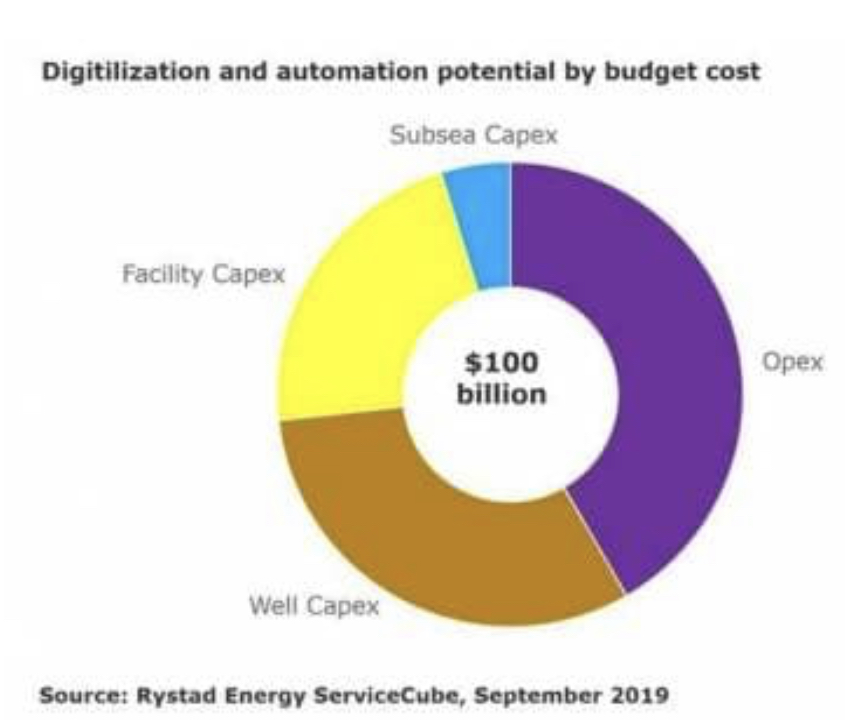 The Race To Save $100 Billion – A Digital Revolution In Oil

In a new in-depth study, Rystad Energy estimates that as much as $100 billion can be eliminated from E&P upstream budgets through automation and digitalization initiatives in the 2020s. Service companies are reinventing themselves to help operators unlock these savings.
In 2018, $1 trillion was spent on operational expenditures, wells, facilities and subsea capital expenditures across more than 3,000 companies in the upstream space. There are varying degrees of potential savings within offshore, shale and conventional onshore activity budgets, but in total, around 10% of this spend can be erased through more efficient and productive operations thanks to automation and digitalization.

“Many key industry players are setting optimistic goals, but the realization of these initiatives largely depends on how freely data is shared amongst companies and how commercial strategies are deployed to drive this development. Because of this, it could be years before we see full adoption. However, based on our analysis of 2018 capital spend and operational budgets, we believe savings could easily reach $100 billion,” says Audun Martinsen, head of oilfield services research.

The amount of savings has the potential to be significant and several operators expect automation and digitalization to reduce drilling costs by 10% to 20%, and facility and subsea costs by 10% to 30%. However, not all field developments or drilling operations have the same capacity to reduce costs. Adoption across the entire value chain of suppliers from national oil companies (NOCs) to majors to smaller E&Ps will vary, so the realistic efficiencies and synergies will be closer to 10% by the end of the next decade.
“In addition to cost savings, digitalization initiatives can also increase productivity by increasing uptime, optimizing reservoir depletion strategies, improving the health, safety, and environment of workers and minimizing greenhouse emissions – all of which have significant value creation,” Martinsen added.

The painful oil market downturn has given upstream operators and service providers a strong incentive to adapt and become more efficient or be forced to close down shop.
A race among suppliers is currently underway as companies roll-out new digital products; the last three months alone have seen major releases by Schlumberger, Baker Hughes and TechnipFMC. One of the largest digitalization initiatives to date was recently launched on 17 September 2019, the result of a collaboration by Schlumberger, Chevron and Microsoft. This ambitious project aims to visualize, interpret and ultimately obtain meaningful insights from multiple data sources across exploration, development, and production and midstream sectors.
Another driver of digitalization is that data storage and processing have become significantly cheaper, and the increased connectivity through the so-called “Internet of Things” has allowed more data to be efficiently digested. Nonetheless, the digital systems of an offshore platform can have around 5,000 to 15,000 sensors, and connecting this myriad of data points is not a straight forward process. Given the complexity of digitalization efforts, it is likely that investments will be primarily aimed at new greenfield projects, while aging producing assets will not be a priority.