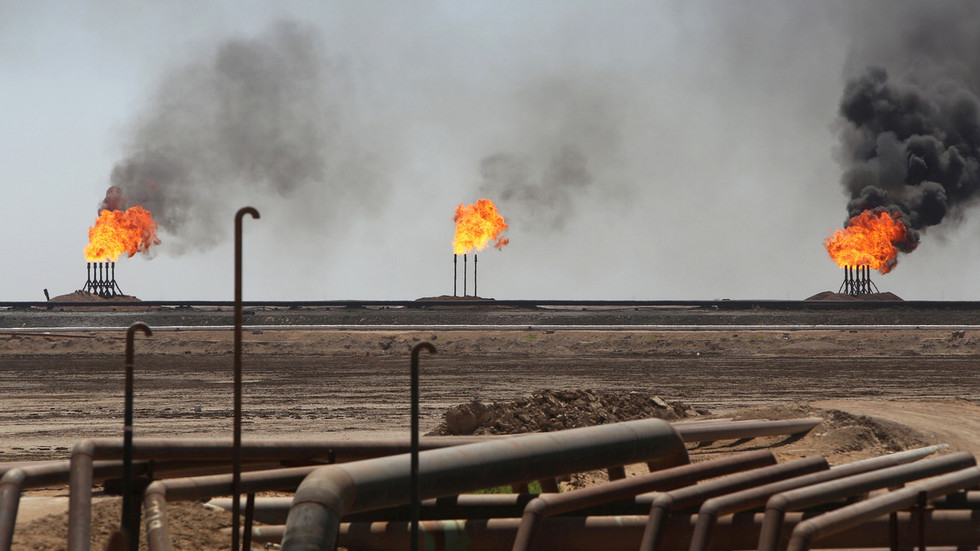 Islamic Republic Occupied Iran proposal for tripartite pipeline, will not only be linked to Syria but also will involve Iraqi participation. This can potentially rattle the shaky bilateral relationship between Baghdad and Washington.

Tehran, however, has broken confidence by the diffuse reactions of the G7 parties in Biarritz, France even after Islamic Republic foreign minister Zarif turned up unexpected. Islamic Republic and Iraqi officials have stated to the press that discussions currently are being held with regards to Mullahs’ desperate proposal to build a new oil pipeline from Iran to Syria, crossing Iraqi territory. At the same time, Baghdad and Tehran struggle as new on ground export routes.

In short, it seems that two options for the pipeline are on the table: a new 1,000 km pipeline running through Iraq into Syria, or repairs on the Iranian side of the Kirkuk-Baniyas pipeline, which is an 800 km pipeline. The new pipeline project is slated to target an overall capacity of 1.25 million barrels of oil per day. This project would take around 2 years to be completed. The goal of the official discussions is to find alternatives to the Strait of Hormuz for Iraq and Iran. Washington and its allies, however, will be looking at this in a totally different way.

Tehran will be banking on the support of those European partners, that are trying to keep the JCPOA deal alive. Analysts, however, expect that Washington, most probably backed by the UK, Australia and the main Arab states, will be trying to block and outright prevent the construction of the Iran-Iraq (Syria) pipeline.

The proposal to reopen the Kirkuk-Baniyas pipeline that runs through Iraq. It would be a crucial element in the creation of an oil supply system to Europe independent of the US, experts say.

Islamic Republic proposed to Iraq a project to reopen the pipeline to the Syrian port of Baniyas, in the Mediterranean Sea, to “circumvent US sanctions and not use the Strait of Hormuz, as there are increasing fears about its closure in case of clashes military between the United States and its allies against Iran,” the Iraqi television channel Al-Sumaria reported.

For a long time, a land hydrocarbons corridor in the Mediterranean region is very important for Iran, says political scientist and professor at the Russian Financial University, Leonid Krutakov said, as quoted by the Russian newspaper Vzglyad.

The expert recalls that the war against Syria began shortly after Iran, Iraq and Syria signed a memorandum on the construction of a gas pipeline from the Iranian South Pars site to Europe in July 2011.

This route would allow Europe to dispense with the liquefied gas promoted by the US in the European market, explains Krutakov.

However, due to the war in Syria, plans to build the pipeline were suspended. Approximately at the same time the perspectives of the Kirkuk-Baniyas route were discussed, but after the deterioration of the situation in Syria and northern Iraq, these negotiations were postponed.

First indicators show that the Trump Administration will be putting all its force on Baghdad to reconsider the deal. Baghdad’s position is precarious, as it needs to navigate between a wide range of political pressure groups, Islamic Republic backed militias, Kurdish politics and its neighbors. At the same time, Baghdad doesn’t want to become a victim of the Islamic Republic-US confrontation, as its main crude oil export route is still the Strait of Hormuz. Walking a very tight rope, Baghdad has still been able not only to expand its oil and gas production, while keeping markets interested to take off the product.

The rising export volumes are met with skepticism, as it is not always clear if volumes are 100% Iraqi crude or mixed with Iranian crude. European and Asian customers have still shown a large interest, but an increased official Iranian involvement in oil volumes transportation in the country could cause a stir. US sanctions on Iraqi operators or government owned entities would for sure put a stop on other deals in the EU or Asia too.

At the same time, the Syria route being addressed by Baghdad and Tehran also will cause some political issues. The Syrian situation has stabilized somewhat, and with Assad in power, Iran, Russia and Hezbollah are desperately trying to reinforce their positions, while Western players are keeping out of the area at present. For Arab countries the situation seems to have changed. After a reestablishing diplomatic ties with Syria, Persian Gulf states and Egypt are considering their options. Iraq has a vast interest, as Syria is a potential market, but also a short route to export Iraqi oil and gas to European markets. Baghdad will for sure get the full backing of Islamic Republic for these adventures, even if it puts the country in the crosshairs of the U.S. Sources also have indicated that the Iraqi approach is not in-line with the interests of the other Arab countries, as they feel circumvented by Baghdad.

A heated confrontation between Baghdad and Washington will spell more pressure for Islamic Republic. Baghdad is currently facing internal unrest, economic crisis and growing external interference. Islamic Republic pressure to block US interests in Iraq already have resulted in attacks and threats by militant groups. At the same time, IRGC power bases in the country are being targeted by Israeli and unknown other adversaries. With the US very blunt political, approach IRGC has lost much of its base support in Iran and developing significant division inside. In addition, sanctions on Islamic Republic and declaring Islamic Republic Guard Corps as a Terrorist Organization have made relations quite thin and distant with neighboring countries. Arab interference is also on the rise, as the UAE, Saudi Arabia and Egypt are trying to mitigate Iranian influence, are still struggling opening up economic and military discussions for the future.

Iraq, in the meantime should consider its other export options. The most realistic one is to expand the Iraq-Jordan pipeline volumes. No Arab, Western or even Israeli opposition is to be expected. Whatever decision Iraq makes; it should understand that taking the wrong approach could fuel conflict in the already unstable region.