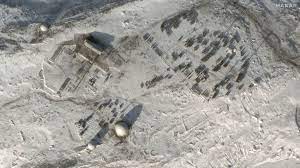 Russia has continued expanding its military bases in the Arctic region despite significant losses in its war on Ukraine, according to a new series of satellite images obtained by CNN.

NATO Secretary General Jens Stoltenberg also told CNN in an exclusive interview on Friday there is now “a significant Russian military build-up in the high north,” with recent tensions causing the alliance to “double its presence” in response.

The findings also come as a senior Western intelligence official told CNN Russia has withdrawn as much as three quarters of its land forces from the High North region near the Arctic, sending them to bolster its faltering invasion of its neighbor, Ukraine.

The satellite pictures, obtained by CNN from Maxar Technologies, show a series of Russian radar bases and runways undergoing improvements over the past year. The images do not show dramatic development, but rather the continued progress of fortifying and expanding an area analysts say is of vital importance to Russia’s defensive strategy, at a time of great strain on Moscow’s resources.