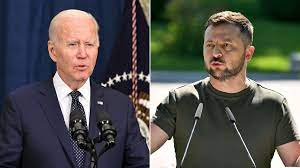 Ukrainian President Volodymyr Zelensky will pay a dramatic surprise visit to Washington on Wednesday, using his first trip outside his homeland since it was invaded 300 days ago to rally his top international partner behind sustained military and economic assistance.

He will visit the Oval Office in the afternoon for extended talks with US President Joe Biden, who will announce he is sending nearly $2 billion in additional security assistance to Ukraine, including a sophisticated new air defense system. The two will convene a White House news conference before Zelensky addresses members of Congress on Capitol Hill in prime time.

The visit by the Ukrainian leader to Washington, expected to last only a matter of hours, nonetheless amounts to a remarkable moment 10 months since Russia’s war in Ukraine began.

Pulled together quickly by American and Ukrainian officials over the past 10 days, the wartime visit is meant to demonstrate in stirring fashion the continued American commitment to Ukraine at a moment when Biden’s ability to maintain that support at home and abroad is being tested.

“(Biden) will reinforce the fundamental message on this trip to President Zelensky directly — to the Ukrainian people, the American people and the world publicly — that the United States will stand with Ukraine for as long as it takes,” a senior administration official said.