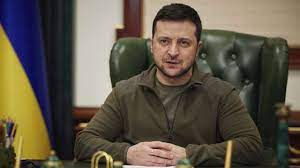 Ukrainian President Volodymyr Zelensky will pay a dramatic surprise visit to Washington on Wednesday, using his first trip outside his homeland since it was invaded 300 days ago to rally his top international partner behind sustained military and economic assistance.

He will visit the Oval Office in the afternoon for extended talks with US President Joe Biden, who will announce he is sending nearly $2 billion in additional security assistance to Ukraine, including a sophisticated new air defense system. The two will convene a White House news conference before Zelensky addresses members of Congress on Capitol Hill in prime time.

The visit by the Ukrainian leader to Washington, expected to last only a matter of hours, nonetheless amounts to a remarkable moment 10 months since Russia’s war in Ukraine began.

Pulled together quickly by American and Ukrainian officials over the past 10 days, the wartime visit is meant to demonstrate in stirring fashion the continued American commitment to Ukraine at a moment when Biden’s ability to maintain that support at home and abroad is being tested.

“(Biden) will reinforce the fundamental message on this trip to President Zelensky directly – to the Ukrainian people, the American people and the world publicly – that the United States will stand with Ukraine for as long as it takes,” a senior administration official said.

Biden first discussed the prospect of Zelensky visiting Washington during a telephone call with the Ukrainian leader on December 11, an administration official said. A formal invitation was extended a week ago that Zelensky accepted, launching joint consultations on the security parameters of the risky, highly secretive trip.

Zelensky, who the official said was “very keen” to visit the US, determined those parameters met his needs, and the US set to work executing them. The trip was finally confirmed on Sunday.

US officials declined to provide additional details about the security arrangements ahead of the trip, including whether Zelensky flew aboard a US military aircraft out of his country. Transit in and out of the country has been exceedingly difficult. Western leaders who have visited Kyiv over the past year have journeyed on a lengthy train ride from Poland.

“It’s something we’ve wanted to do for some time,” the administration official said, noting it came 300 days after Russia began its invasion in February. Still, the official said there was “no mathematical formula for the right day for President Zelensky to make his first trip out of the country” and neither the US nor Zelensky would be deterred from making travel decisions by Russia’s actions.

When Zelensky arrives to the White House, he will meet for lengthy talks with Biden, along with key members of the US national security team. The official said Biden and Zelensky would engage in an “in-depth strategic discussion on the way ahead on the battlefield,” along with the training and capabilities Western partners are providing Ukraine, the sanctions they have imposed on Russia and economic and energy assistance to the Ukrainian people.

Over the course of the 10-month invasion, Zelensky has emerged as the international personification of Ukrainian resistance and has spent much of the year appealing to nations for support. He has remained inside his country for the duration of the war, a reflection both of his desire to rally alongside his besieged country and the precarious security situation he would face outside Ukraine.

As the war nears its one-year anniversary, however, international support for Ukraine is being tested. Sanctions on Moscow have contributed to higher energy prices, particularly in Europe, which is heavily reliant on Russian oil and gas. In the United States, Republicans who are poised to take control of the House of Representatives have signaled they won’t quickly approve massive new assistance packages for Ukraine.

On the battlefield, Ukraine has retaken key cities and shown unlikely resistance to an unprepared and ill-equipped Russian army. But Russian President Vladimir Putin has shown no indication he plans to ease up, and has been ruthless in targeting civilian energy infrastructure, lending a degree of misery to Ukraine’s cold winter.

The timing appeared ripe for Zelensky to make a dramatic gesture like slipping out of Ukraine for the first time since the invasion began. For Biden, the visit presents an opportunity to reinforce his convictions for supporting Ukraine, even as the war plods on.

“We know that the days ahead, the conflict will continue,” the senior administration official said. “The winter will be hard, and we will continue day-in, day-out to provide critical support to the Ukrainian people.”

The new, $1.8 billion package Biden will unveil includes a Patriot surface-to-air missile system, which has been a longstanding request of Ukraine’s to fend of Russian air attacks. CNN was first to report the US was expected to send the Patriot systems to Ukraine.

The official said US troops would train Ukrainians to use the system in a third country. CNN has previously reported the training would occur at a US Army base in Grafenwoehr, Germany.

The system is widely considered one of the most capable long-range weapons to defend airspace against incoming ballistic and cruise missiles, as well as some aircraft. Because of its long-range and high-altitude capability, it can potentially shoot down Russian missiles and aircraft far from their intended targets inside Ukraine.

Russia has warned on unspecific “consequences” if the US provided Ukraine with Patriot missiles, viewing the shipments as further US engagement in the war. The official was clear, however, that Biden remained steadfast in keeping the United States out of direct conflict with Russia, despite the enhanced security assistance.

“The President has been very clear that we are going to lean forward and be robust in our support for Ukraine on the military, economic, energy and humanitarian fronts, but we are not seeking to engage in a direct war with Russia. And nothing about that will change tomorrow,” the official said.