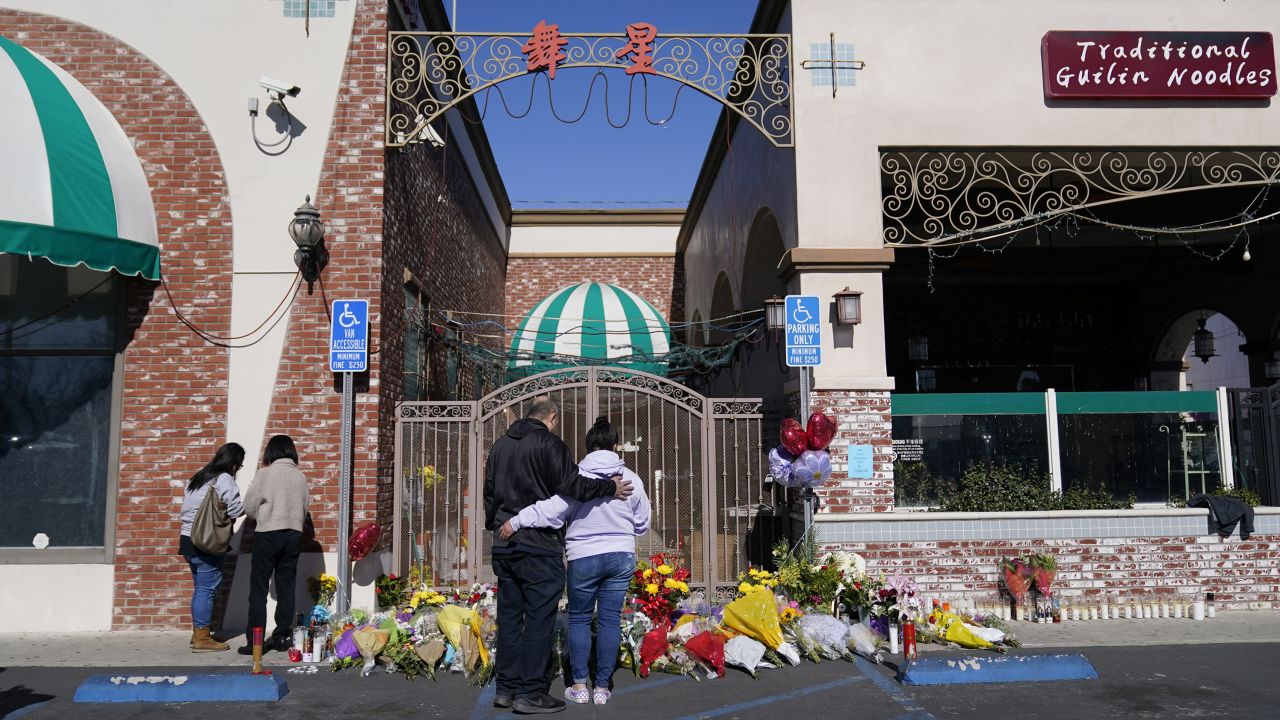 It’s that quintessential American quirk – the split second, instinctive glance around a Walmart, a place of worship, a supermarket or a workplace for an escape route should the worst happen.

A never-ending roll of mass shootings reflects the reality that while hundreds of millions of citizens go about their daily business safely, no one and nowhere is immune from the possibility of a sudden eruption of violence.

“It could happen to your community too, we never thought it would happen to us,” Ray Mueller, a senior local official in San Mateo County, the location of California’s second mass shooting in three days, said on “CNN This Morning.”

At least seven people died in that killing spree on Monday, centering on a mushroom farm and near a trucking facility. It unfolded after 11 died in a dance studio shooting in Monterey Park, California, on Saturday night amid Lunar New Year celebrations for the city’s majority Asian community.

Everyday life is a soft target. Anywhere can become the venue for the next preventable tragedy.

There was the Buffalo supermarket shooting where 10 Black people died in May. A gunman killed five people at an LGBTQ nightclub in Colorado Springs in November. Two people were shot dead on Monday at a school for at-risk kids in Des Moines, Iowa. And earlier this month, a first-grade teacher narrowly survived after allegedly being shot by a six-year-old in class in Virginia.

The most American of public holidays – July Fourth – was marred last year by a mass shooting at a parade in Highland Park, Illinois, that killed seven people. Places of worship are not immune: 11 people were killed in a Pittsburgh synagogue in 2018. On a horrific Sunday morning in 2017, a gunman killed 26 people at a church in Sutherland Springs, Texas. Add to this the hundreds of yearly shootings at seemingly mundane places across the country. On Tuesday, for instance, the accused shooter in a 2019 mass shooting that killed 23 people in a Walmart in El Paso, Texas, filed notice of his intention to plead guilty to federal charges.

“Tragedy upon tragedy,” wrote California Democratic Gov. Gavin Newsom on Twitter, as he reckoned with his state’s recent horror, in a comment equally applicable to the plight of the whole nation.

The capacity to wreak carnage

Each of these incidents is distinct and can have unique causes. Sometimes there are workplace disputes, family traumas, personal grudges or mental health issues. Hate crimes or political motives can be involved. Especially in the immediate aftermath, these shootings can appear as a baffling shattering of normality.

“As he’s walking into the store, he pulls out his gun and there are two people getting food and he shoots them,” Yakima, Washington, Police Chief Matt Murray told CNN, about a shooting that killed at least three people at a Circle K on Tuesday.

While there are individual motives behind many shootings, it would also be facile not to acknowledge that the easily availability of deadly weapons – legally and illegally – gives people the capacity to wreak carnage. It’s also indisputable that nations that have cracked down on firearms’ availability after horrific mass killings have seen fewer mass shootings.

America’s Second Amendment rights make this country an outlier – to the deep satisfaction of many citizens who believe in the right to bear arms. And the country’s frontier mentality, entrenched suspicion of government and authority and self-image of self-reliance help explain how it has a different relationship with guns than many other developed nations. So comparisons between the US and other developed democracies are not always that helpful.

But at the same time, the regularity of people being gunned down as they work, shop and play is raising growing questions about the extent to which one person’s freedom to bear arms suppresses another’s rights to life, liberty and the pursuit of happiness. Many gun rights advocates are not willing to even entertain this issue. The same applies to the perennial debate whether constitutional guarantees necessarily mean people should be able to buy high-powered weapons of war for personal use.

“When any community cannot gather to celebrate without fear of being the victim of the next mass shooting, we have lost our way,” New Jersey Democratic Gov. Phil Murphy said in a statement after the mass shooting in Monterey Park. “We cannot be a nation where such gun violence is tolerated and normalized.”

Even more poignantly, 10-year-old Kautier Brown told CNN Sunday that he didn’t feel safe at his Richneck Elementary School in Newport News, Virginia, where the teacher shooting, allegedly by the six-year-old, took place. His fears are familiar to every parent of a generation of kids who’ve grown up with the pit-of-the-stomach fear of being caught up in one of the multiple school shootings every year.

A partisan political system that is little help

Resignation that nothing will change is fueled by a political system that is so entrenched on guns that it can’t usually frame a meaningful response to shootings, let alone solutions. Offers of “thoughts and prayers” by pro-gun rights Republicans are routinely mocked by Americans looking for reform. Conservatives often divert blame to a national mental health crisis that they do little to alleviate.

Second Amendment absolutists often argue that if more “good guys” carried guns, everyone would be safer. In their own ritualistic response, Democrats often re-up demands for an assault weapons ban they know they can’t pass. There was some hope that this futile cycle could be broken last year with the passage of the first major federal gun safety legislation in decades. The new law fell short of what Democrats wanted but it did draw some Republican votes. It provides money for states to implement red flag programs that could temporarily prevent individuals facing mental health crises from accessing firearms. The new law could save lives and is a tribute to relatives of mass shooting victims who have refused to be defeated by bitter obstacles for years, including parents who lost kids in the Sandy Hook Elementary School massacre in 2012.

But there remain deep complications even for the limited new law and existing restrictions – for instance, in the often inexact science of determining when a person crosses a legal threshold in which they could be denied guns. And firearms often have a lifespan that is longer than humans, meaning that even strict limits passed now might have little impact on the millions that are already in circulation.

All of this explains why there’s little reason to hope that the mass shootings that rock America week after week, year after year, will abate.