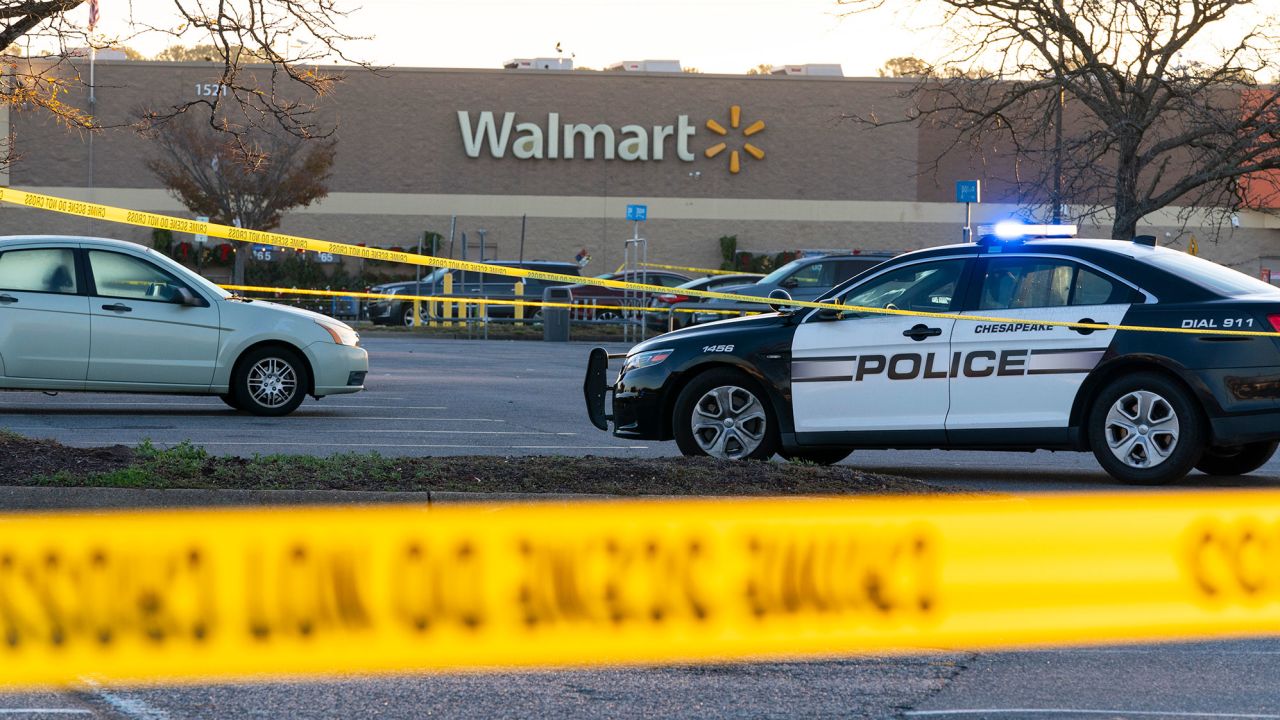 As the nation’s psyche was shattered by yet another mass shooting in Chesapeake, Virginia, the moments of terror recounted by Walmart employee Jessie Wilczewski – who survived a Tuesday night attack that killed at least six people – reflected the position of hopelessness where America once again finds itself when it comes to gun violence.

“He had the gun up to my forehead,” Wilczewski told CNN’s Erica Hill Wednesday night on “Erin Burnett OutFront,” describing the moment when she encountered the suspect, who was identified by Walmart as an “overnight team lead” at the store. “He told me to go home.”

“I got up real slow and I tried not to look at anybody on the ground,” Wilczewski said. She made her way through the double doors out to the egg aisle, gripping her bag and wondering if the suspect would shoot her in the back. She began running and didn’t stop until she reached her car.

This is a year when President Joe Biden and congressional lawmakers managed to forge bipartisan compromise on a package of gun safety laws after years of inaction. States like Virginia and Colorado – where a gunman opened fire and killed five people over the weekend at an LBGTQ nightclub in Colorado Springs – have passed robust gun measures intended to prevent these events from occurring. Lawmakers from both parties have spent countless hours on the campaign trail vowing to address the nation’s mental health crisis. Things were supposed to be getting better.

And yet, the nation is again trying to come to terms with another senseless tragedy.

Wilczewski, who was in her fifth night on the job at Walmart, found herself in the break room with a gunman wondering if she was going to make it out alive, and then – when she did – wondering why her life had been spared when so many other innocent ones were not. It is a recurring question that Americans find themselves asking each time a mass shooting occurs.

Those are sentiments that have been expressed by countless survivors of gun violence who have pressed lawmakers to do more in recent years as mass shootings continue unabated. Americans had looked forward to this Thanksgiving holiday as a reprieve at the end of a difficult year buffeted by the repercussions of the pandemic and fears about layoffs and a potential recession. But on a holiday intended as a reflection of the nation’s blessings, the incidents in Virginia and Colorado Springs have plunged the nation back into what seems like an endless debate over how to halt gun violence that never seems to yield a solution.

There have been at least 609 mass shootings this year – incidents where more than four people were shot – compared with 638 shootings last year at this time and 690 shootings in 2021, according to the Gun Violence Archive.

Investigators are still attempting to unravel the motives for the incidents in Virginia and Colorado, but the inexplicable killings in Chesapeake came less than two weeks after a fatal shooting of three football players at the University of Virginia earlier this month. The string of incidents points to the failure of existing laws to stop the carnage, as well as the deep disagreement between Democrats and Republicans about what additional gun safety measures are needed.

The gulf between the two parties was exemplified Wednesday by the diverging responses from Virginia Gov. Glenn Youngkin, a Republican who is being eyed as a potential 2024 White House contender, and Biden, who has long advocated for stricter gun measures.

Youngkin said the hearts of Virginians were broken after “a horrendous senseless act of violence in Chesapeake” – calling it a “shocking stark reality” without delving into any detail about gun policy or how these events could be prevented.

“We have had two horrific acts of violence in the commonwealth of Virginia in two weeks and that absolutely brings with it a sense of anger, a sense of fear, a sense of deep, deep grief,” the Virginia governor said.

Biden, by contrast, called for “greater action” on gun reform, following his call for reinstating an assault weapons ban after the Colorado Springs shooting – a proposal that has little chance of gaining traction in a divided Congress, with Republicans set to take over the House in January.

Biden noted in a statement that Thanksgiving is normally a holiday that “brings us together as Americans and as families, when we hug our loved ones and count our blessings. But because of yet another horrific and senseless act of violence, there are now even more tables across the country that will have empty seats this Thanksgiving. There are now more families who know the worst kind of loss and pain imaginable.”

“This year, I signed the most significant gun reform in a generation, but that is not nearly enough. We must take greater action,” Biden said.

Charles Ramsey, a former Washington, DC, police chief and a CNN law enforcement analyst, noted that the police response times in both the Chesapeake, Virginia, and the Colorado shootings were very fast – the first officer reached the scene within two minutes at the Walmart, according to the City of Chesapeake. Yet police were unable to stop the loss of life, including the death of a 16-year-old boy in the Walmart shooting who is not being identified because he is a minor.

“It’s going to happen again; it’s not going to stop,” Ramsey said on CNN’s “The Situation Room” on Wednesday. “We’ll be talking about something else next week – I mean, if we just have short memories, we don’t focus and we don’t take the steps we need to take as a society to stop it.”

Steve Moore, a retired FBI supervisory special agent who is a CNN law enforcement contributor, said it would be more effective for lawmakers to focus their efforts on solving the nation’s mental health problems, rather than pursuing an assault weapons ban that has little chance of passage – in part because there are already so many of those weapons in the hands of private individuals.

“It’s kind of late to close the barn door,” Moore said on CNN’s “Newsroom” on Wednesday. “I’m not saying we shouldn’t, but we have to find a way to keep them out of the hands of people who shouldn’t have them, and in this Colorado situation, there was more than enough – more than enough evidence to use a red flag law to keep weapons away from him.”

The portraits emerging of both suspects were those of troubled individuals whose behavior raised questions for those who encountered them.

Anderson Lee Aldrich, the alleged Colorado gunman who was seen on video from a Colorado courtroom on Wednesday, was bullied as a youth and appeared to have had a difficult relationship with their mother, who faced a string of arrests and related mental health evaluations, according to reporting from the CNN Investigates team. The shooter identifies as non-binary and goes by the pronouns they and them, according to court documents.

Aldrich’s mother called police last year to report that Aldrich had threatened to harm her with bombs and other weapons – but no charges were filed in that case, which was subsequently sealed.

Co-workers said the gunman who opened fire at Walmart, who was identified by the City of Chesapeake as 31-year-old Andre Bing, had displayed odd and threatening behavior.

Briana Tyler, a Walmart employee, told CNN’s Brian Todd that the gunman “just had a blank stare on his face” during the shooting.

“He just literally just looked around the room and just shot and there were people just dropping to the floor,” Tyler said. “Everybody was screaming, gasping. And yeah, he just walked away after that and just continued throughout the store and just kept shooting.”

Bing was armed with a handgun and several magazines, according to the city of Chesapeake, and died from what is believed to have been a self-inflicted gunshot wound.