Iran was the second place in the world for internet censorship in 2022 after repeatedly shutting off the internet in parts of country and blocking access to social media platforms to curb protests sparking from of Mahsa Amini’s death, a new poll has showed.

As anti-regime demonstrations spilled onto the internet and social media, with videos of women burning their hijabs going viral, Iran responded by repeated internet blackouts and the shutdown of mobile networks across the capital of Tehran and other parts of the county.

As anti-regime demonstrations spilled onto the internet and social media, with videos of women burning their hijabs going viral, Iran responded by repeated internet blackouts and the shutdown of mobile networks across the capital of Tehran and other parts of the country. 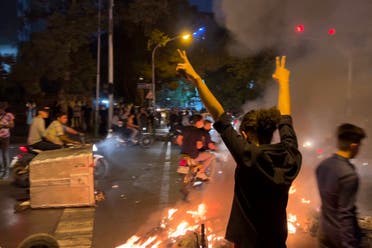 A file picture obtained by AFP outside Iran shows a demonstrator raising his arms and makes the victory sign during a protest for Mahsa Amini, a woman who reportedly died after being arrested by the Islamic republic’s morality police, in Tehran on September 19, 2022.

This led to Iran being placed second on the list of the world’s worst countries for internet censorship last year, according to research by internet watchdog Surfshark published on Monday.

Its internet censorship yearly recap shows around half the world’s population – about 4.2 billion – suffered a politically motivated internet blackout in 2022.

Nineteen countries imposed fresh restrictions on citizens’ use of the web last year, bringing the total of nations engaged in such repressive measures to 32.

As far as regions go, Asia led the poll comprising of the most countries that introduced repressive internet measures last year.

The Jammu & Kashmir region in India, imposed the largest number of interest restrictions the poll said.

In Iran, its censorship actions arose after the death in police custody of Amini, who was arrested for being ‘inappropriately dressed’ under the nation’s repressive Islamic law, which sparked public outrage.

A woman near Bologna, Italy, cuts her hair off with scissors in protest following the death of jailed Iranian woman, Mahsa Amini, for wearing an improper hijab. (Reuters)

“More than half of the world’s population was affected by internet censorship last year,’ says Surfshark spokeswoman Gabriele Racaityte-Krasauske. “Many of these cases involved full internet disruptions on a local or national level.”

“These can be devastating and extremely dangerous, especially during wartime, protests, or violent government repressions. Internet restrictions can make it difficult or even impossible to mobilize people for the defense of democracy, contact loved ones, access news sites, and spread information to the outside world on what’s happening,”

In total, 11 Asian countries imposed new internet disruptions in 2022, bringing a total of 58 cases. The Jammu and Kashmir region had the highest disruption count in the world (24), followed by Iran (11) and the rest of India (10).

Africa follows Asia as the second most disruption-intensive region, with 5 countries imposing 13 restrictions. Sudan takes the lead in Africa by disruption count (4), followed by Burkina Faso (3) and Zimbabwe (3).

Alp Toker, director of NetBlocks, said: “Through the past year we’ve seen how governments have used internet shutdowns and telecommunications blackouts as a tool of repression and control, silencing journalists, civil society, and the general public. Internet connectivity today underpins all human rights, which is why it’s more critical than ever to document mass-censorship incidents and find ways to get people reconnected.”

The report found that Burkina Faso, Russia, and Azerbaijan had the longest internet disruptions last year

Azerbaijan restricted TikTok in September. The platform remains restricted to this day.

Of all social media platforms, Facebook is the most-hated by autocratic governments and remains highly censored in 2022. In fact, since 2015, a staggering 46 percent of the global population has, in some way or another, been affected by government-imposed Facebook restrictions.

The Internet Censorship Tracker was developed by Surfshark in partnership with internet watchdog NetBlocks. The research tracks partial and complete internet and social media shutdowns in 196 countries and territories from 2015 onwards.