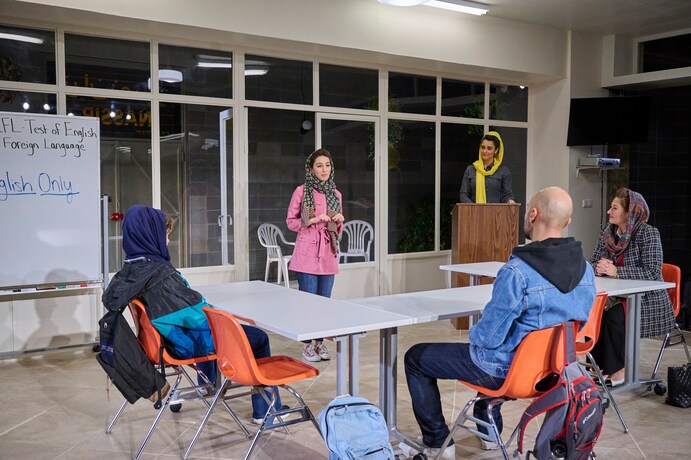 Set in Karaj, a city just west of Tehran, Sanaz Toossi’s one-act play “English” centers on four Iranian adults studying English in preparation for taking the Test of English as a Foreign Language, or TOEFL exam — the key, they hope, to either personal or professional opportunities abroad. As they interact with one another and with their teacher, Marjan (Nazanin Nour), they experience feelings of self-discovery, as well as humiliation and alienation, that can come with trying to learn another language.

“Every day in here, I feel like idiot, and I want everyone to know I am not idiot,” says Elham (Tara Grammy), who expresses her frustration most overtly among the group.

For the Iranian American playwright, there is a larger goal: Toossi hopes that recent events in Iran — where a months-long protest movement that began in the fall represents the largest sustained public opposition to the Islamic regime in over a decade — will lend a greater timeliness to her show, now having its Washington premiere at Studio Theatre.

“When I wrote [this], Iran was not in the middle of a revolution,” she says. “I believe what is happening now is a revolution.”

The students wrestle with not only the linguistic challenges of English but also their conflicting motivations and even resentments toward learning it. Elham wants to study gastroenterology in Australia but has already failed the TOEFL five times; the older Roya (Nina Ameri) hopes to join her son and his wife in “the Canada” but is distressed by their having given her granddaughter a name, Claire, that she can’t even pronounce. Marjan, for all her measured formality, appears to harbor insecurities about her own command of the language.

Toossi, 31, wrote “English” several years ago while an MFA student at New York University, in response to another period of political disruption: the Trump era. Within days of Donald Trump taking office, his administration imposed a travel ban preventing people from seven Muslim-majority countries, including Iran, from entering the United States.

“When I wrote the play, I hoped simply that we would be better to the people who have immigrated to this country, and that we would understand that … they’re three-dimensional people who left things behind, you know?” Toossi says over Zoom from Los Angeles, where she has recently moved.

“English,” which premiered (after some pandemic-related delays) at New York’s Atlantic Theater Company in 2022, received the Lucille Lortel Award for outstanding new off-Broadway play last year. In his review of that production, Washington Post critic Peter Marks described the play as “a reminder that the aggressive public face of a country, whether an Iran or a Russia, does not fairly represent the face of its public.”

Indeed, Toossi hopes her work can fill a gap in American theater, which has offered few nuanced depictions of ordinary Iranians onstage. “I just grew up so frustrated with what people thought being an Iranian was,” says the playwright, who was raised by Iranian immigrant parents in Orange County, Calif., and made regular trips to their homeland as a child. “I’ve always wanted people to see who we are. We came from this beautiful, vibrant culture; we are people who love poetry, and art. My grandfather even in his late stages of dementia was still reciting poetry.”

Studio’s production is set in spring 2009, in the lead-up to the pro-democracy Green Movement that swept Iran after the disputed reelection of Mahmoud Ahmadinejad as president, but that’s more or less incidental. Toossi writes in a broadly comedic vein that keeps the focus on the characters’ feelings and moods, rather than larger social or political dynamics.

In “English” and her second play, “Wish You Were Here,” which also premiered off-Broadway in New York last year, almost all of Toossi’s characters are female, something she says came about unconsciously. “My experience of being in Iran is being surrounded by … fierce, loud, sometimes irritating but very loving women,” she says, with a laugh. “So it’s just shaped so much of me.”

That Iran’s current unrest — which began in response to the death of a 22-year-old woman, Mahsa Amini, in custody of the “morality police” in September — has been led by women makes Toossi’s emphasis on female characters all the more compelling.

Notably, all five actors in “English” are of Iranian heritage; Toossi describes Nour — who was born and grew up in Arlington, Va. — and Grammy as being “sort of like diaspora royalty.” Maboud Ebrahimzadeh, who plays Omid, the somewhat mysterious sole male student, grew up in Westminster, Md., and has appeared in numerous D.C.-area productions.

Nour and Grammy in particular have attracted large social media followings for their outspokenness about the protests. (Nour took over Ellen DeGeneres’s Instagram Stories at an LA rally in October.) As the program notes, “Several of the actors in Studio’s production of ‘English’ are amplifying the voices of Iranians without the same freedoms to protest.”

Toossi admits she isn’t sure whether theater really can change the world. Nevertheless, she hopes that her play will “help my fellow Iranians” by drawing attention to their cause, if nothing else. “I just feel very knocked over by the courage Iranian women are showing us every day … and I hope we can support them in building a world worthy of them.”