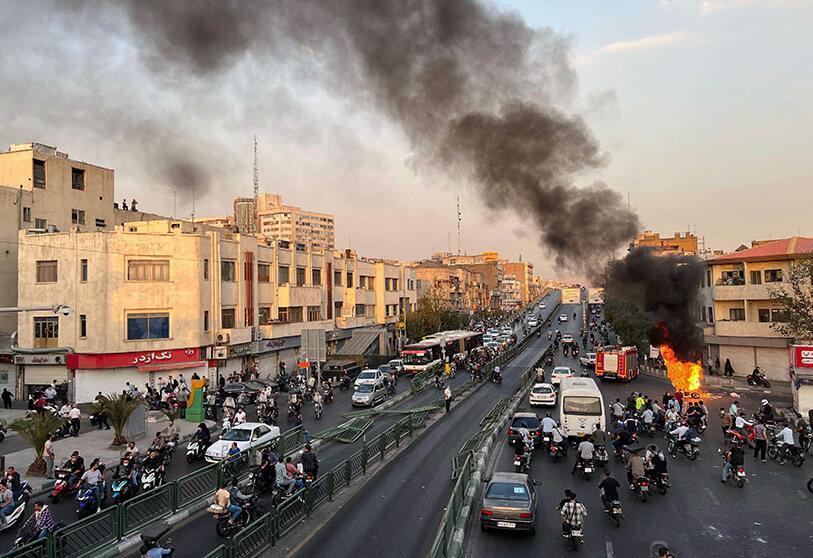 Despair and the country’s dire economic outlook are driving many Iranians to suicide.

The current anti-government protests are highlighting Iran’s serious structural problems. The anger unleashed after the death of the young Kurdish woman Mahsa Amini – the protesters’ detonator – has revealed a strong sense of discontent in Iranian society. What were initially protests led by women demanding an end to the compulsory hijab and other misogynistic measures quickly turned into a full-blown revolution that has united Iranians from different social strata, ideologies, ethnicities and religions with a single goal: to put an end to the theocratic regime in Tehran.

Under the slogan Jin, jiyan, azadî (woman, life, freedom) and with the image of Amini as the symbol of the protests, Iranians continue to fight for democracy, freedom and justice inside and outside Iran while denouncing the regime’s violence, censorship and brutal repression. In addition to the political and social aspect, these protests have put the spotlight on the country’s critical economic situation. Despite President Ebrahim Raisi’s promises to improve Iran’s financial outlook, the Middle Eastern nation continues to suffer from structural economic problems.

Iran, despite possessing significant oil and gas reserves, suffers from a severe economic crisis as a result of regime mismanagement, corruption and Western sanctions. The US withdrawal from the nuclear deal in 2018 and the subsequent sanctions imposed by former President Donald Trump dealt a severe blow to Iran’s ailing economy despite Tehran’s efforts to reach out to other powers such as China and Turkey. According to data from the Atlantic Council, the GDP growth rate declined by 6% that year and by 6.8% the following year. In 2019 the inflation rate also increased to 36.5%, two points higher than the previous year.

In 2021, Iran’s public debt reached 48% of GDP, unemployment exceeded 12% and inflation was 30%. However, the latter figure is likely to be even higher. Indeed, over the summer, Raisi mistakenly revealed that inflation was at least 60%.

All these problems have an impact on the citizenry, especially affecting the poorest. It is estimated that 60-70% of the Iranian population lives below the poverty line. According to the Middle East Institute (MEI), 18.4% of Iranians were living in absolute poverty last year. Since the protests began, the national currency has lost about 20% of its value

In addition to economic hardship, Iranian workers face injustices and a lack of labour rights. Anahita Nassir, a political analyst, and Nilufar Alafar, an activist, point out that around 60% of employment in Iran is informal, with all that this implies in terms of violation of rights and perpetuation of inequalities.

The minimum wage in the country was around 560 euros per month in 2022, a figure that has remained unchanged from previous years despite the evolution of the national economy. “Workers have lost purchasing power, with the cost of living getting higher and higher,” they tell Atalayar.

Nassir and Alafar point out that during the 43 years of the Islamic Republic, workers’ labour rights “have been trampled underfoot” while all dissenting voices have suffered repression, “the only trump card the system has left to maintain power”. Moreover, Iranian workers have no government support and no trade unions, which were banned after the victory of the Islamic Revolution in 1979. The ayatollahs’ regime has also suppressed political parties and all forms of association.

“Working conditions are not respected, especially in the public sector, where wages are systematically delayed for months and demands for workers’ rights are repressed with a heavy hand, including imprisonment for trade unionists and activists and defenders,” they explain.

Another major problem is corruption and the lack of transparency and credibility. The regime has absolute control over the economy, which gives more advantages to certain sectors to the detriment of others, creating a strong imbalance and contrasts between the different social classes, as Daniel Bashandeh, an Iranian analyst, explains to Atalayar. The Islamic Revolutionary Guard, whose power and control over strategic sectors of the Iranian economy has increased significantly, is worth mentioning here. Nassir and Alafar highlight, for example, its role in construction and the arms industry.

This situation creates, on the one hand, strong social discontent that translates into protests and, on the other hand, a sense of despair that can lead to tragic decisions such as suicide.

The critical economic outlook – coupled with political repression – has driven many Iranians to take their own lives. According to the Iranian daily Etemad, at least 23 workers have committed suicide since March 2022 in Iran. Etemad points out some of the reasons for the suicides: dismissal, punishment or threats. The Iranian media outlet also notes that at least five of the workers took their own lives because of poverty and low living standards, while four took their lives because of “livelihood problems”.

However, the actual figures may be higher. As Etemad points out, there have been other workers who ended their lives, “but their families did not reveal the real cause of death due to social and cultural taboos”. In this sense, Nassir and Alafar refer to the “shame”, “discomfort” and “disdain” that suicide causes in the victim’s environment. “In Iran, due to religion and cultural tradition, suicide is still a taboo subject in society. According to religious figures, it is a sin in Islam to commit suicide, as it is a sign of ungratefulness towards Allah,” they explain.

“Families often omit this information from the death certificate for reasons of honour or in order to be able to collect the insurance or the will of the deceased if he or she has made a will. If the cause of death is suicide, and the person has made a will, the will is considered null and void in law,” they add. The taboo on suicide also leads many people to believe that it is inappropriate to seek help for mental health issues.

The regions where most suicides are recorded are in some of the poorest provinces of the country, such as Kohgiluyeh and Boyer-Ahmad, Khuzestan, Kermanshah and Fars, where two 20-year-olds committed suicide after being fired from a bakery. As Al-Monitor reports, before taking their own lives, they released a video in which they claimed to be fed up with the country’s economic difficulties.