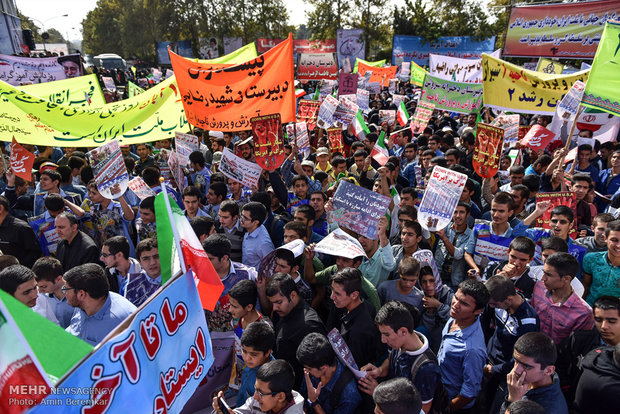 TEHRAN – People, including pupils, took to the streets across the country to mark the anniversary of the seizure of the U.S. embassy in Tehran, better known as “den of espionage”, on November 4, 1979.

The rallies were held in 900 cities, including the capital Tehran, where demonstrators gathered outside the former U.S. embassy.

The rallies marking the takeover of the U.S. embassy have got special importance this year as violent foreign-backed riots in the country have claimed the lives of dozens of people, including security forces.

The marchers were chanting slogans, holding banners against the U.S. and the Israeli regime, strongly condemning the hostile policies of arrogant countries against Iran.

The demonstrations have been turned into a symbol of unity as Iran is grappling with Western-backed riots in Iran since mid-September.

People were also holding banners in support of security forces who have been the main target of violent protestors over the past few weeks.

“Police is the main pillar of security,” read banners in show of solidarity with police.

Demonstrators were also chanting “Death to America” and “Death to Israel”.

President Ebrahim Raisi addressed the event in Tehran. He told the U.S. it is 43 years that Iran has been “freed” and will not be “captured” again.

“It was freed 43 years ago and is determined not to be captured again by you . We will not become milk cow again,” Raisi remarked.

In response to the unrest, which just took the lives of two volunteer Basij forces on Thursday, Raisi said “fueling the fire of riots and insecurity will serve America”.

Less than a year after the victory of the Islamic Revolution that toppled a U.S.-backed monarchy, university students seized the U.S. embassy in Tehran, which had become a center of espionage, planning to overthrow the newly established Islamic system.

The students who seized the embassy later published documents proving that the compound was indeed engaged in plans and measures to overthrow the Islamic republic system.

Iran’s Intelligence Ministry and the Intelligence Organization of the Islamic Revolution Guards Corps (IRGC) issued a joint statement on October 28 pointing to the major role of foreign spy agencies, especially the CIA, in orchestrating the violent riots in Iran in the past weeks.