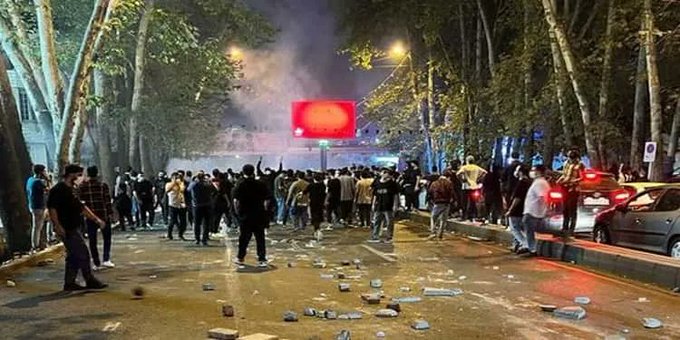 Iran’s nationwide uprising is marking its 101st day on Sunday following a new outburst of nightly protests by people from all walks of life in cities checkered across the country. Protesters braved the bitter winter cold and snowfall in many cities, including Tehran, Mashhad, Sanandaj, Isfahan, Bandar Abbas, among others to launch anti-regime protests with slogans such as “Death to Khamenei!” and “Death to the dictator!” referring directly to regime Supreme Leader Ali Khamenei.

Protests in Iran have to this day expanded to at least 280 cities. Over 750 people have been killed and more than 30,000 are arrested by the regime’s forces, according to sources of Iranian opposition People’s Mojahedin Organization of Iran (PMOI/MEK). The names of 601 killed protesters have been published by the PMOI/MEK.

Early reports on Sunday morning indicate that merchants and store-owners in the city of Bukan, northwest Iran, are on strike in solidarity with the nationwide uprising against the mullahs’ regime.

In Bukan, a large crowd gathered to commemorate protesters murdered by security forces during the nationwide uprising. The gathering turned into an anti-regime rally, with protesters chanting, “Martyrs don’t die!” and “Death to Khamenei!” Protesters lit fires in streets and chanted slogans against the regime.

Another protest rally was held near Kamyaran on the 40th day of the murder of Borhan Karami, another protester killed by security forces. Protesters vowed to continue the path of the martyrs of the revolution.

On Saturday morning, employees of the local Real Estate Registration Organization were on strike in cities across the country. This includes the cities of Mashhad, Yazd, Khalkhal, Izeh, Azna, Dorud, Aligudarz, Takestan, Haftgel, Khorramdasht, Ramhormoz, Joghatay, among others.

In Tehran’s Tehranpars district, a group of students held a protest rally, chanting “Death to Khamenei!” and “Death to the dictator!”

In other reports from Tehran, locals began chanting “Death to the dictator!” in the City Theater Metro Station and security forces responded by firing tear gas into the building. Protesters in the Narmak district of the Iranian capital also took to the streets and began chanting: “Khamenei, you dictator! We will bury you!”

Similar rallies were being reported from the city of Saqqez, Mahsa Amini’s hometown in Kurdistan Province, western Iran.

Similar protests and demonstrations were reported in Bandar Abbas, southern Iran, and other cities and towns. This is yet another sign of the Iranian people’s devotion to continue these rallies despite all the crackdown measures imposed by the mullahs, let alone the recent executions of two protesters and death sentences issued for many others arrested for taking part in the recent anti-regime demonstrations.