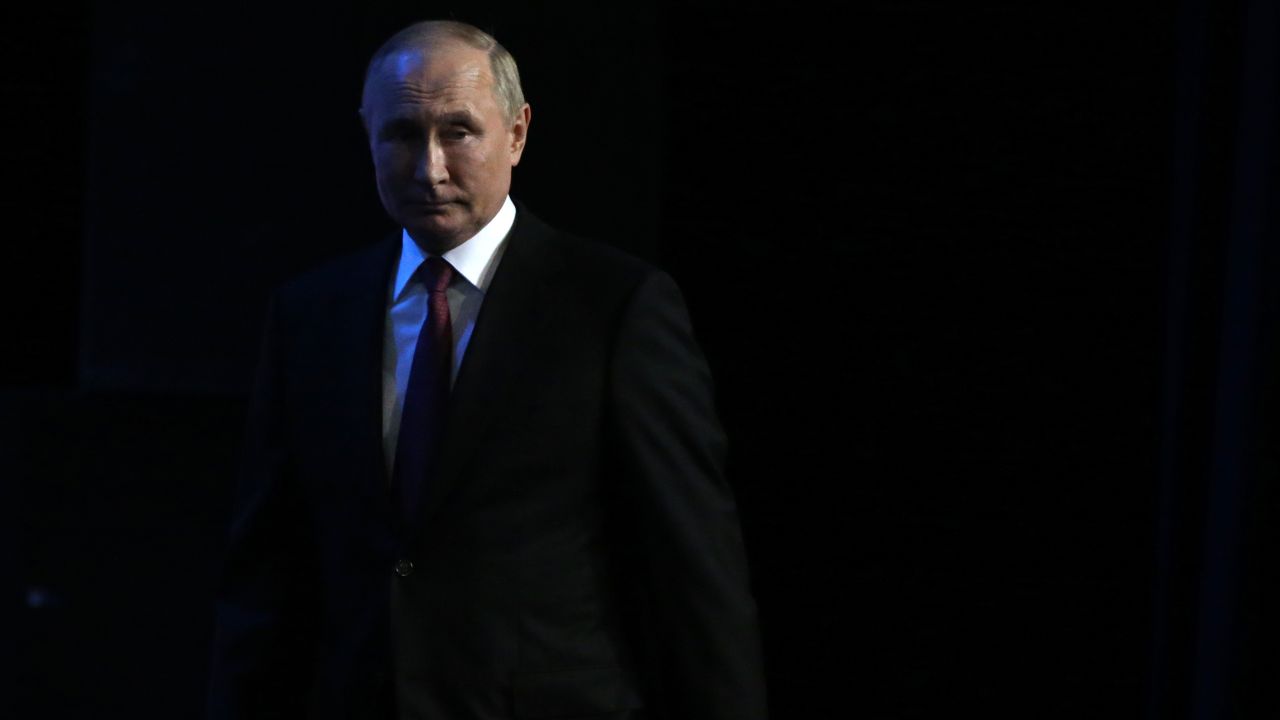 For months, Russian President Vladimir Putin has waited and watched, hoping for a fracturing of the remarkable Washington consensus built by President Joe Biden on the need to do everything it takes to defend democracy in Ukraine.

Now, at last, the first cracks may be appearing.

There is no sign that the $18 billion US pipeline of military aid that has helped Ukraine drive back Russia’s onslaught is immediately in danger. But the stirrings of political opposition to an endless US role in the war are growing on both sides of the aisle just two weeks before the November midterms.

Even the slightest hint of a softening of American resolve could comfort Putin as the Kremlin strongman prepares to inflict a painful winter on Ukrainian civilians and Europeans reliant on Russian gas.

In what can only be described as a political debacle on Tuesday, progressive Democrats published, then withdrew, a letter initially signed in June that called on the White House to match its effort to arm Ukraine with a strong diplomatic effort to engage Russia and seek a ceasefire. This came days after House Minority Leader Kevin McCarthy, the possible next speaker, warned that Kyiv could not expect a “blank check” on aid if the GOP is in charge next year.

Ex-President Donald Trump, a possible future Republican candidate, has, meanwhile, been complaining about the cost of supporting a government locked in a struggle with his hero, Putin, and that he dragged into his first impeachment by using military aid in a coercion scheme.

It’s clear that a bipartisan consensus for aiding Ukraine still exists in Washington. But the rumblings that Biden’s hardline on Russia may not always enjoy near unanimous support came at an especially sensitive time as the West seeks to discredit Russia’s latest round of nuclear rhetoric – a warning that Kyiv could use a dirty bomb. The claims have led to high-level talks between US and Russian military chiefs and are widely being interpreted as either more scare tactics or perhaps an attempt by Moscow to create a false flag operation that could be used as a pretext for its own use of weapons of mass destruction.

Seeking to highlight US and Western commitment to Ukraine amid the political chatter, Biden delivered a fresh warning on Tuesday against the use of smaller-yield nuclear weapons on the battlefield in Ukraine.

“Let me just say: Russia would be making an incredibly serious mistake for it to use a tactical nuclear weapon,” Biden told reporters after he was asked whether Russia was preparing to use a dirty bomb. “I’m not guaranteeing you that it’s a false flag operation yet, don’t know, but it would be a serious, serious mistake.”

The President’s comments were a reminder that the maneuvering in Washington over Ukraine aid is taking place in a critical context, with anxiety still acute over a possible escalation of the war that could spill over into direct US-Russia hostilities and put the world on a disastrous path toward a full-on nuclear escalation.

This is why signs of fraying political resolve in the United States, and in some allied nations, are so significant. They could convince Putin that a war of attrition over the winter could sooner or later cause fatigue in the West and therefore weaken Ukraine’s ability to fight.

Questions that need to be asked

And yet some of the questions raised by those who are cautious about the US stance are relevant and important. A foreign policy operation that lines up the United States against its former Cold War foe and nuclear rival must be constantly evaluated and justified by the President, given the cost and risks.

The fact that there is no diplomatic track in the conflict – Biden has several times mused privately that he doesn’t know what Putin’s “off-ramps” might be – is worthy of discussion and, potentially, testing in contacts with Moscow. And at a time of raging inflation and economic hardship in the United States, it is incumbent on the administration and its supporters to demonstrate to American taxpayers why a war on the edge of Europe is sucking up billions in public money, even if it’s not as if Ukraine currently has the “blank check” McCarthy mentioned.

The risk, though, is that such debates still play into the hands of Putin, who has already demonstrated his capacity to exploit and widen US political divides with his election-meddling scheme in 2016 and the hold he had over Trump, even getting him to denounce US intelligence agencies in a joint news conference.

Sooner or later, the political jousting in Washington over how long the US should stay involved in arming Ukraine – and how much it would cost – will stumble on the critical questions that could decide the war and could be the motivation for Putin’s frequent escalation of nuclear rhetoric that raises the stakes.

Is the West as dedicated as Putin, whose political survival may depend on victory or at least not losing, to prevailing in Ukraine? And is it really willing to enter into a dangerous cycle of escalation that could risk wider nuclear war to do so?

Political drama on both sides of the aisle

It is with these questions lingering that the drama over a letter signed by 30 progressives played out on Tuesday. Most of the members did not endorse releasing the letter this week, and some said they wouldn’t have signed it now given the grave turn the war has taken in recent days. The anger over the letter caused Rep. Pramila Jayapal, the head of the Congressional Progressive Caucus, to withdraw the letter, saying it was drafted months ago and released by staff without vetting.

The episode did not just threaten to expose vulnerable lawmakers just two weeks before an election in which Democrats increasingly fear they will lose the House. It could give McCarthy cover in a future Congress to argue that opposition to Biden’s multi-billion dollar arms packages is not just a Republican preoccupation.

And while the letter was withdrawn, some of its sentiments could boil up again.

The letter said that lawmakers were under no illusions about the difficulty in engaging Russia, given its “outrageous and illegal invasion of Ukraine.” But it added: “If there is a way to end the war while preserving a free and independent Ukraine, it is America’s responsibility to pursue every diplomatic avenue to support such a solution that is acceptable to the people of Ukraine.”

The problem, however, is that the terms that Russia has set for any peace deal involve locking in its battlefield gains. Now that it has illegally annexed several Ukrainian regions, any preconditions that Putin would set would be impossible for Kyiv to agree to. And rolling back such positions would deal the Russian leader the defeat he is desperate to avoid. So while the idea of talking might seem appealing, it’s not clear how the US could shift the calculus of either side. And Biden has repeatedly insisted he will not negotiate over Ukrainian President Volodymyr Zelensky’s head, as Putin would like.

One progressive Democrat, Rep. Ro Khanna of California, told CNN’s Bianna Golodryga that he did not support the decision to pull back the letter.

“I think the letter was common sense,” Khanna said. “I support making sure we arm Ukraine and provide arms to Ukraine and continue to fund it, but I also believe that the President, as he said, we are at a risk of nuclear war.”

“Don’t you think our counterpart should be talking to Russia? Of course they should to be sure that it doesn’t escalate.”

There is also a risk that diplomacy at this stage could offer Putin a prize for the human carnage he perpetrated in Ukraine.

“There is moral and strategic peril in sitting down with Putin too early. It risks legitimizing his crimes and handing over parts of Ukraine to Russia in an agreement that Putin won’t even honor,” Democratic Sen. Chris Murphy of Connecticut wrote in a tweet on Tuesday.

“Sometimes, a bully must be shown the limits of his power before diplomacy can work.”

One thing that the drama over the Democratic letter on Ukraine did achieve was to show that while support for Ukraine is bipartisan, anxiety about the war is too, even if the skeptics are a smaller group so far.

What a Republican House could mean for Ukraine

The prospect of a House more squarely in Trump’s ideological image after the midterm elections and of more GOP senators who share his “America First” worldview will worry the administration.

“I think people are gonna be sitting in a recession and they’re not going to write a blank check to Ukraine,” McCarthy said in an interview with Punchbowl News last week, which was seized upon by Democrats.

But it did not necessarily mean the California lawmaker was determined to cut off aid. He may simply have been creating some political room for himself in the knowledge of the sensitivity of the issue in his pro-Trump party. In theory, a speaker McCarthy would be able to pass a Ukraine funding bill by using both Republican and Democratic votes.

But whether his own position in a fractious GOP conference would allow him to do so is another matter. That’s one reason why there is growing talk in Washington that Democrats might try to pass a mammoth bill during the lame-duck Congress, which they will still control after the midterms even if the GOP wins, to carry Ukraine through next year’s fighting.

McCarthy is not the only Republican sounding skeptical notes. Ohio Republican Senate nominee J.D. Vance said he didn’t really care about what happened to Ukraine before the invasion and that the US should worry about the influx across its own southern border. (His comment has been used by Democratic opponent, Rep. Tim Ryan, who is seeking to make inroads among the state’s significant Ukrainian exile community). Vance is one of a new breed of potential GOP senators that could prove more skeptical to aiding Ukraine than the old guard of senior leaders like Senate Minority Leader Mitch McConnell and hawkish South Carolina Sen. Lindsey Graham.

Similar sentiments to Vance’s are often heard on conservative media. But those opinions usually discount the broader implications of the war in Ukraine. The conflict is so important because it represents more than a territorial spat on the far edges of Europe. It is a fight for democracy itself. If Ukraine falls, Russia will establish the principle that a large authoritarian nation can simply wipe a smaller neighbor off the map.

This would have grave consequences in other conflicts – for example, over Taiwan amid rising concerns China could try to take back the democratic island by force. And a Russian victory in Ukraine could directly threaten America’s NATO allies and bring the US closer to a direct conflict with Russia.