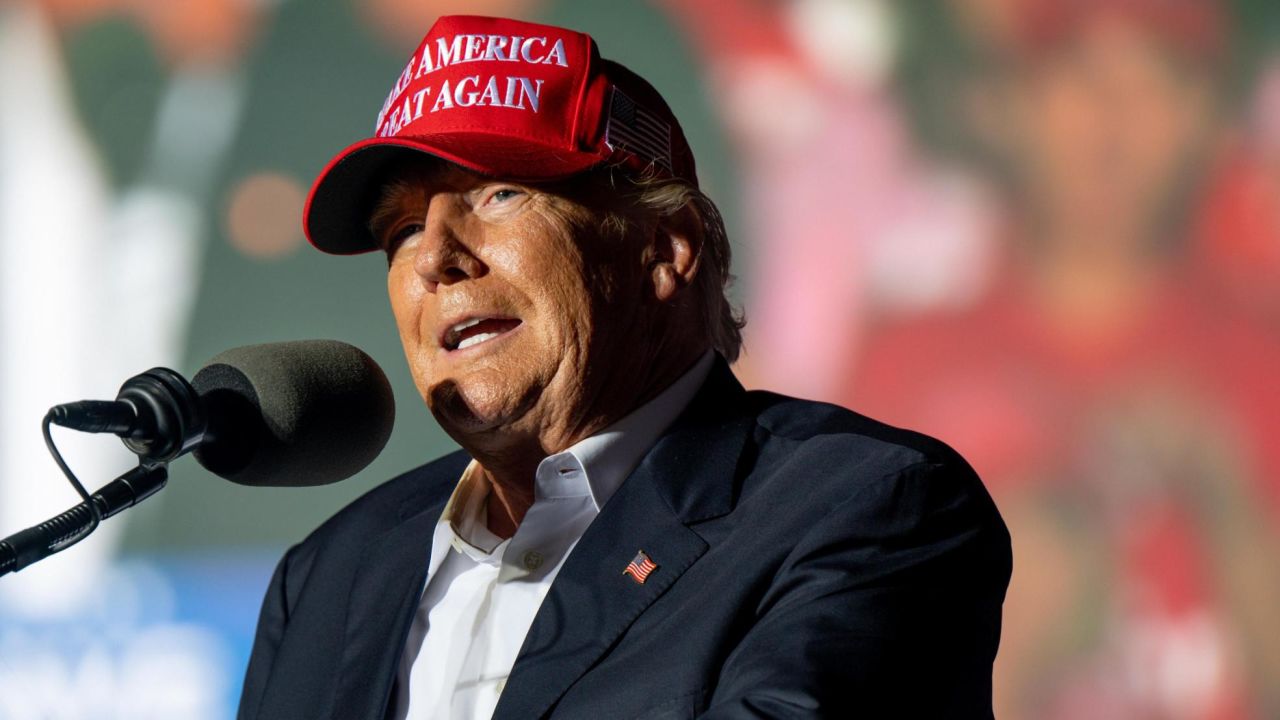 As midterms near, Trump shifts focus to 2024 and his own political future

Donald Trump is accelerating his plans for another presidential campaign, buoyed by a belief that Republicans are on the precipice of significant gains in next month’s midterm elections and that many of his handpicked candidates will prevail.

Sources close to the former President, many of whom were not authorized to speak publicly about internal deliberations, said he is anxious to begin his next chapter even as he battles a web of legal troubles. Trump’s shifting focus to his political future follows recent campaign stops in Nevada, Ohio, Arizona and Michigan, where the success or failure of GOP candidates he’s backed is likely to have an impact on his next act.

Behind the scenes, he has spent the closing weeks of the 2022 cycle preparing his political operation for another presidential campaign, including assembling his campaign leadership, hatching plans for his remaining midterm rallies, and searching for a venue from which to launch his perceived political comeback. His attorneys have also been seeking resolutions to some of his legal troubles – most notably the Justice Department probe into government records he kept after leaving office – to free up time for him to focus on his political future.

One Trump adviser said his political operation would be “very busy after the midterm election,” while others signaled there is little stopping him at this point from mounting another campaign.

“I would be shocked if he didn’t run,” said Matt Schlapp, a Trump loyalist who leads the American Conservative Union. “I think the only things that prevent him at this point are if he thought it was a fool’s errand and he didn’t think he could win, or if there’s some health reason.”

“The wheels are turning so he can be ready to go as soon after as he wants after November 8,” added a person close to Trump.

In a recent interview with CBS News, Kellyanne Conway, Trump’s 2016 campaign manager said the former President “would like to” announce after the midterms and before Thanksgiving, echoing sources close to the former President who told CNN they expected an immediate shift to 2024 after Election Day. The exact timing of a campaign launch is still being discussed between Trump and his team. While many advisers believe he will be unable to wait until next year, some have encouraged him to announce after the new Congress has been seated in January 2023.

Trump himself indicated during a rally on Saturday that he is likely to launch a third bid for the White House, declaring in his bluntest terms yet, “I will probably have to do it again.”

The former President’s recent activities certainly reflect a candidate-in-waiting. At his Saturday rally in Robstown, Texas, he arrived in his beloved Boeing 757 jet, a favorite rally prop during his previous runs for office that he and allies have nicknamed “Trump Force One.” The plane, which had only recently completed repairs, is expected to reappear on the campaign trail in the coming weeks. Trump has also been floating different leadership structures for his campaign and soliciting advice from allies on whether he should name a campaign manager and, if so, who that person should be. Four people familiar with the matter said he is widely expected to offer a leadership position to longtime GOP strategist Chris LaCivita, who currently helms one of his primary fundraising vehicles, and has also discussed elevating Sergio Gor to a senior role, two of those people said. Gor is a former Rand Paul aide who now runs a conservative publishing business with Trump’s son, Don Jr.

“Chris makes a lot of sense and has a reputation for being a very good political operative,” said a Trump adviser. “Trump sees value in bringing on an actual political pro this time.” LaCivita declined to comment on the record.

“It will be a similar operation to what we’ve had but now we are building it out,” said a senior Trump aide.

Trump has also been fielding input from advisers on everything from where his campaign should be headquartered to what the broader infrastructure should look like. The former President has spent the bulk of his time since leaving office at his Mar-a-Lago estate in Palm Beach, though several sources described the waterfront compound as too small and expensive to house a presidential campaign. Currently, aides said the leading options are elsewhere in Florida or the Washington, DC, area (Trump’s 2020 campaign was based in Northern Virginia).

“I’m encouraging a Florida campaign headquarters. What he’s gone through with the attorney general in New York, it taints the entire state. And I don’t think he’ll headquarter the campaign at Mar-a-Lago, it’s the priciest real estate in the southeastern United States,” said Michael Caputo, a former Trump campaign aide who remains close to the former President.

Sources said the campaign model being discussed is likely to be lean and with limited staff, not unlike the operation that led to his unexpected victory in 2016 but far from the more robust and costly campaign he ran in 2020. Sources also said there would be an emphasis on ensuring that advisers who have helped professionalize his post-presidency operation are installed in key campaign positions. Two of those figures, Brian Jack and Susie Wiles, are already expected to have senior roles on a 2024 Trump campaign, sources said. Jack served as White House political director under Trump and currently leads House Minority Leader Kevin McCarthy’s political operation.

Neither he nor Wiles wished to provide comment for this story.

In September, Trump allies launched a new super PAC called MAGA Inc. to bolster Trump’s endorsed midterm candidates and provide a fundraising vehicle for Trump to utilize in 2024. The group has currently spent $8.8 million on advertising through the November election, according to data from AdImpact.

“It is the campaign-in-waiting. No doubt about that,” said a current Trump aide.

Of course, Trump has reversed course before and there are some close to the former President who remain skeptical that he will ultimately put himself through another grueling presidential campaign.

Currently 76, Trump would be nearly 80 at the outset of a second term starting in 2025, and family members who were once intimately involved in his political calculations have expressed little interest in assisting another campaign. That includes his daughter Ivanka Trump and son-in-law Jared Kushner, according to two people familiar with their involvement, who said they have been minimally involved in Trump’s political activities after moving to Miami at the end of his presidency.

“I think it’s still a 50-50 flip if he runs,” one adviser said. “Does he want to be President? Yes. Does he want to spend the next two years dealing with this sh*t? No.”

Some suggested Trump, who relishes a good guessing game, has done little to halt speculation about his 2024 intentions while he continues to decide for himself what timing makes the most sense. Waiting until the next Congress is seated, which Trump expects will include a Republican House majority, or even until the Super Bowl next February are two options that have recently been circulated, according to several sources familiar with his thinking.

The outcome of numerous investigations encircling Trump could also become a factor as he plots his political future.

The former President remains embroiled in multiple high-profile legal battles at the state and federal level that sources say have begun to wear on him. On Friday, the House committee investigating January 6, 2021, delivered a subpoena to Trump for testimony about his involvement in efforts to overturn the 2020 election and his activities on the day pro-Trump rioters breached the US Capitol. Last month, the Department of Justice subpoenaed dozens of Trump allies, advisers, and former and current aides as it ramped up its own probe into the deadly riot. Trump also remains under investigation in Fulton County, Georgia for possible interference in the state’s 2020 election results and at least one of his top advisers, Kash Patel, recently appeared before a federal grand jury investigating the former President’s retention of classified documents after he left office.

As CNN has previously reported, Trump’s legal team has sought to alleviate some of the pressure on him by adopting a less combative posture toward investigators – including those looking into his storage of government records at his Mar-a-Lago residence.

But while he remains embattled, some Trump allies said his desire to run again has not waned – and even intensified after FBI agents conducted an unprecedented search at his Florida home in August.

“If you understand Donald Trump, the decisions that have been made by his detractors have prodded him to run,” said Caputo. “They have made it nearly impossible for him to walk away.”

While Trump’s midterm travel has been irregular so far, sources familiar with his plans said he is eyeing a flurry of campaign rallies during the final week before Election Day, though nothing has been firmly scheduled.

The former President will be off the campaign trail this coming weekend as his National Doral Golf Club hosts a LIV Golf Tournament, but his aides have been working to schedule appearances in a handful of states and races where they believe he can drive turnout among Republicans and make a difference on the margins. While nothing has been decided, visits to Nevada, Arizona, Georgia, Florida, Ohio and Pennsylvania are actively being discussed, sources said.

But as Trump considers using a potential red wave as the backdrop for his presidential campaign launch, some Republicans said he is likely to demand more credit than he’s owed. One Republican who speaks regularly with Trump but requested anonymity for fear of retribution said the former President’s midterm schedule may indicate that a 2024 campaign won’t go as smoothly as he anticipates, pointing to various races where candidates have passed over Trump for other high-profile GOP surrogates.

They continued, “If you can’t go to a state – if a campaign literally doesn’t want you – that tells you a lot about your strength as a candidate. It’s an indication of your level of overall support and your ability to attract swing and crossover voters.”