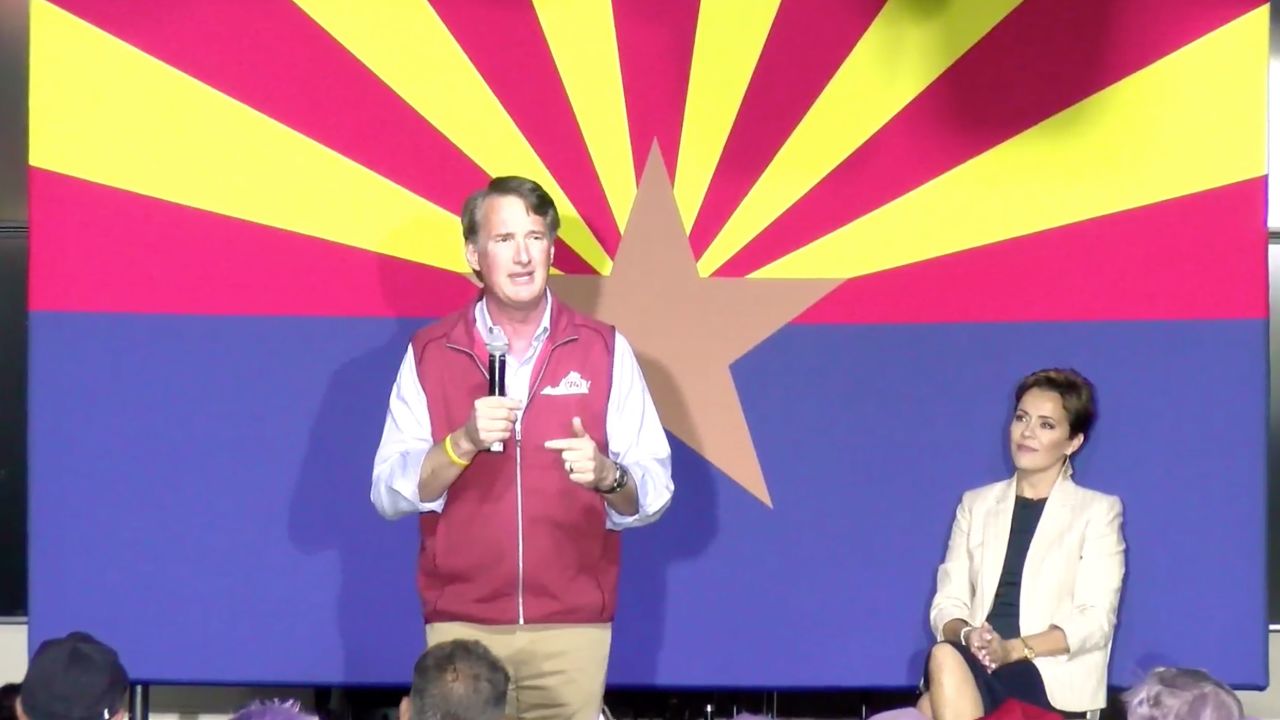 The modern Republican Party’s one non-negotiable value is this: the ruthless pursuit of power. Party leaders who recognize this prosper while those who hold principle over political advancement get swept away.

The latest Republican rising star to learn this lesson is Glenn Youngkin.

A year ago, pundits were praising Virginia’s governor for finding a way to win a blue state while keeping ex-President Donald Trump at arms-length and for creating a Republican campaign blueprint not based on outright election denialism. Yet on Wednesday, Youngkin had an arm around Kari Lake, the new GOP sensation and ultra-MAGA candidate in Arizona’s governor’s race. The nominee refused in a CNN interview on Sunday to commit to recognizing the result of her race if she doesn’t win and is running hard as a loyal member of the ex-President’s election denial movement.

“You are awesome,” Youngkin told his new friend at an energetic rally in Tucson that showcased two possible post-Trump faces of the GOP.

“The winning team is the winning team – elections have consequences,” Youngkin said, urging all Republicans voters to get behind Lake, but also encapsulating the ideological choice he must make for a future in the party.

The Virginia governor, raising his national profile in midterm races, touted his own credentials by suggesting any red wave in November had its “headwaters” in his state last year, which President Joe Biden had won by 10 points just the year before. And by appearing with candidates like Lake, whose extreme pro-Trump credentials are more obvious than his own, he was demonstrating an awareness of the reality of how successful careers are built in today’s GOP.

The party’s single-minded pursuit of power is not new. It’s the key feature of the last two decades of Washington politics, a period that culminated in a bargain with a president who didn’t seem to share the moral codes of social and religious conservatives but who delivered them a generational Supreme Court majority.

After two years out of power, the Republican Party’s keenness to return to the pinnacle in Congress is palpable, and has been the most important motivating factor in its midterm campaign strategy ahead of the election on November 8.

There is nothing ostensibly wrong with a political party prioritizing a single-minded focus on winning power. Politics is the art of the possible. And successful parties and leaders understand election victories are paramount. Democratic presidents from Lyndon Johnson to Bill Clinton were known for doing what needed to be done to win, reshaping their own principles if necessary. Johnson, a former Senate majority leader, especially was ruthless in wielding his authority won at the ballot box. And more recently, House Speaker Nancy Pelosi has not dominated the House for nearly two decades without being determined to use her power.

Yet the Republican Party’s embrace of its most basic instincts is especially notable and perhaps questionable because of the reality of the times. Most often, GOP leaders are enabling and embracing a twice impeached ex-President with clear autocratic tendencies who incited an insurrection to try to overturn a democratic election. Or they are elevating Trump followers who built their careers in his image or on his falsehoods about the 2020 election.

For a party that once took pride in its heritage of promoting global democracy against tyranny, this is a striking leap. Republicans who defended such values, which were once prized in the party of Lincoln, against Trump – including Wyoming Rep. Liz Cheney and former Arizona Sen. Jeff Flake – were ostracized. Flake did not run for reelection and Cheney, the vice chair of the House select committee investigating January 6, 2021, lost her primary this summer to a Trump-backed challenger. Meanwhile, extremists who promote conspiracy theories and question the election, like Georgia Rep. Marjorie Taylor Greene, for example, are superstars in the party because the Trump base loves them.

How McCarthy and McConnell surfed the Trump wave

The most striking recent example of the naked pursuit of power could be seen when House Minority Leader Kevin McCarthy rushed down to Mar-a-Lago to make up with Trump soon after criticizing him over the Capitol insurrection. The California lawmaker knew that his party’s hope of a House majority and his own dreams of being speaker hinged on a rapprochement with Trump and his base voters.

An understanding of the path to power – for the last six years running through Trump – explains why Senate Minority Leader Mitch McConnell lived with the ex-President’s malfeasance and chaos, despite his personal disdain for Trump. Most notably, the Kentucky Republican declined to vote to convict Trump in a second impeachment trial over the insurrection, which could have made a return to power by the former President impractical.

McConnell rode out the madcap eruptions of Trump’s term and chafed at his selection of questionable midterm candidates and meddling in key races, which has complicating the party’s mission of wining Senate control, even in places that should have been a slam dunk in a national environment that favors the GOP.

And McConnell has shrugged off Trump’s insults and racist social media posts against his wife, former Transportation Secretary Elaine Chao. He’s done more than keep quiet. The Senate Leadership Fund, the super PAC affiliated with the minority leader, has poured tens of millions of dollars into key races – including in states like Ohio and Georgia in a bid to bail out misfiring candidates effectively crowned as party nominees by none other than Trump.

McConnell’s affiliated super PAC is even spending in New Hampshire, where the GOP nominee has said he wouldn’t vote for the Kentucky Republican for leader. But it’s another pickup opportunity that could bolster a possible GOP majority.

McConnell knows the payoff of learning to live with a party leader like Trump, who, in personality and deportment, is his exact opposite. Last time around, McConnell rode the Trump wave and completed the epochal quest for an unassailable right-wing Supreme Court majority. If Republicans take the Senate, he will be positioned to lock in his life’s work of changing the makeup of the judiciary. He’s also closing in on Mike Mansfield as the longest-serving Senate party leader ever, despite Trump’s ever more vocal attempts to topple him from his leadership post.

McConnell parried such moves by simply telling CNN’s Manu Raju in an interview last week: “I have the votes.”

The impulse to win control of Congress at all costs – even if it appears to compromise values the GOP professes to stand for – was on display when several US senators flew into Georgia earlier this month to rescue controversy-swamped Senate nominee Hershel Walker.

The pro-Trump nominee has faced allegations that he paid for a woman to terminate her pregnancy despite having said during the campaign that he would support a national ban on the procedure with no exceptions. Walker has denied the allegations, which CNN has not independently confirmed, but the furor highlighted the risky nature of a candidacy that probably wouldn’t have happened but for his friendship with Trump.

“Herschel Walker will be a leader in the Senate,” Cotton said, “just like he’s been a leader in sports and in business for the state of Georgia.”

Walker’s credentials are not the most important thing for Cotton, Scott and McConnell. But he represents potentially the 51st Republican vote in the Senate if he can win the race – and therefore a return to power for the GOP. So there was never any idea that he would be abandoned.

Youngkin’s decision to campaign with Lake is over-layered with similar political calculations.

In winning the Virginia governor’s mansion last year, Youngkin adopted a subtle campaign strategy. By talking about the handling of gender issues in schools and referencing “election integrity,” the former businessman sent sufficient “Make America Great Again” messages to ensure turnout in pro-Trump rural counties. But he was also careful not to alienate voters in the state’s more liberal Washington, DC, suburbs where parents frustrated by Covid-19 lockdowns warmed to his education message.

He’s doing much the same now – appearing with Trump candidates like Lake and Michigan GOP gubernatorial nominee Tudor Dixon, but also stumping with Georgia Gov. Brian Kemp, who fended off Trump’s efforts to oust him earlier this year.

Given that Virginia governors are not allowed to serve consecutive terms, Youngkin is freed from the need to keep his coalition together for a reelection run. And given how far and wide he’s campaigning with candidates of different ideological stripes, he apparently has designs on becoming a national GOP figure and knows that any future presidential run could hinge on his capacity to appeal beyond just Virginia Republicans.

So while his endorsement may be valuable to Lake in a close gubernatorial race, her rising star power in Trump world also offered a strong incentive for his trip. And it explains the hug after his speech in which he embraced the kind of political personality who wouldn’t have been let anywhere near his events last year.