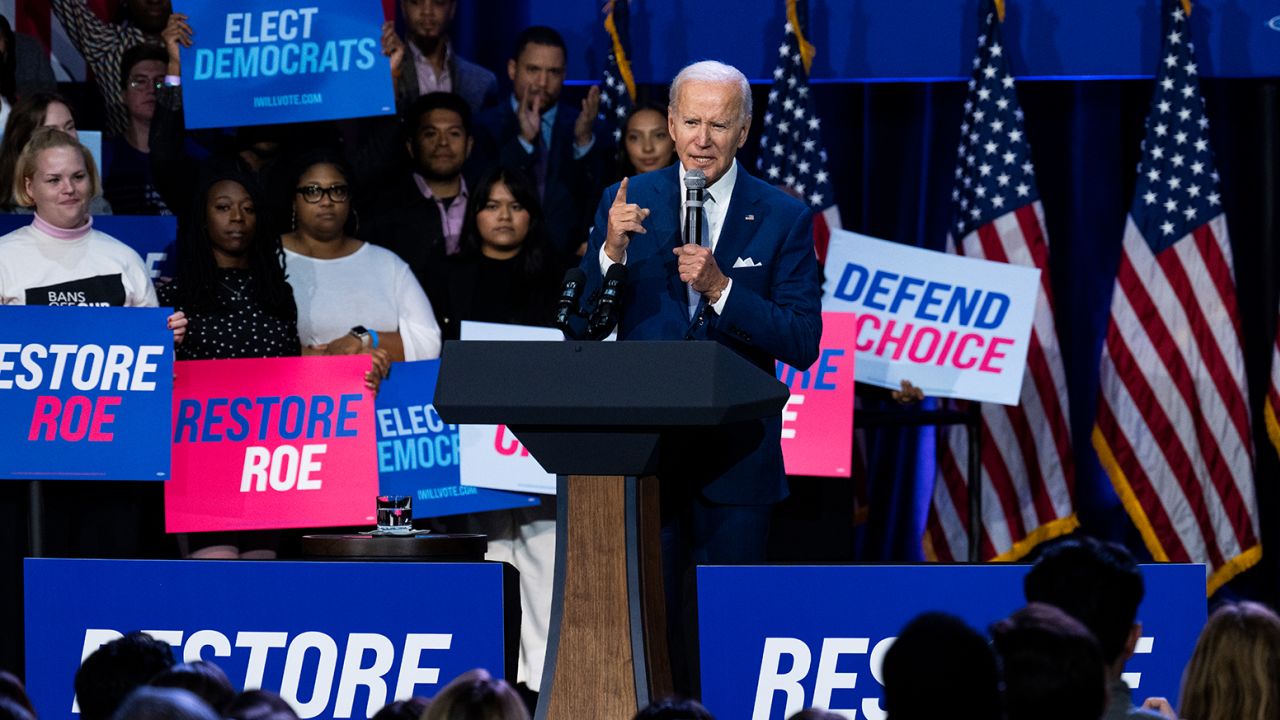 President Joe Biden will attempt to address Americans’ concerns about gas prices Wednesday, a reflection of the Democratic Party’s imperative to connect with voters’ rising anxiety about inflation, the specter of a looming recession and the havoc that the stock market is wreaking on their retirement accounts.

Democrats looking to hold onto their control of power in Washington don’t have much time to get the message right. With just three weeks before the November election, there are new signs of high voter interest. Early voting numbers suggest that turnout in some parts of the country could be on pace to match 2018, a year that had exceptionally high participation for a recent midterm election.

It is still too early to tell which party is benefiting most from higher voter engagement, although polling suggests Republicans have an edge in terms of voter enthusiasm as economic concerns are the dominant issue in voters’ lives.

This has been an election propelled by opposing messages – Republicans are driving hard on inflation and crime, while Democrats are talking about abortion and, in a defensive posture, starring in their own ads with police officers. Threats to American democracy – top of mind to many voters when Biden took over from Donald Trump – remain a worry, but few rank it as their biggest concern, according to a New York Times/Siena College poll, even as many of Trump’s election-denying candidates vie for offices that would give them control over future elections.

The messaging challenge facing the President and Democratic candidates is on full display this week as Biden toggles between events focused on abortion and gas prices.

On Tuesday, he attempted to fire up Democratic base voters still angry about the Supreme Court’s decision overturning Roe v. Wade, which had guaranteed abortion rights nationwide, by promising that that if more Democrats are elected, the first bill he would send to Congress would codify the rights previously enshrined in that landmark decision. He said he would sign the bill in January. But that’s a sequence of events that hinges not only on whether his party can maintain control of the House and Senate, but also whether they can win enough of a Senate majority to force a change to the filibuster rules – an extremely unlikely proposition.

“We’ll restore the right to choose for every woman in every state in America. So vote. You gotta get out the vote,” Biden pleaded during a Democratic National Committee event Tuesday, as he targeted his appeal to young voters who are crucial to Democrats’ hopes in November. “If you do your part and vote Democratic leader(s) (into) Congress, I promise you, we’ll do our part.”

On Wednesday, Biden will focus his message on a much broader audience – those who increasingly cite the economy and inflation as their top issues – when he is expected to announce the release of an additional 15 million barrels of oil from the Strategic Petroleum Reserve as part of his broader effort to dampen gas prices, CNN’s Phil Mattingly reported Tuesday.

The move is part of the 180 million barrel release over six months that the President promised in March. While the average price for a gallon of gas has dropped to $3.87 nationally – well below the all-time high of $5.02, according to AAA data – prices at the pump remain stubbornly high in certain parts of the country like Arizona and Nevada where key House and Senate races could tip the balance of power in Washington.

The GOP needs a net gain of five seats to win the House majority, and a net gain of just one seat to win control of the evenly decided Senate.

Republicans have spent much of the election hammering Democrats on inflation and blaming the party in power for Americans’ economic woes. In another slice of bad news for Democrats, Fitch Ratings predicted on Tuesday that inflation and the Federal Reserve’s interest rate hikes will push the American economy into a recession starting next spring.

Buffeted by those pressures, White House press secretary Karine Jean-Pierre said Tuesday that the President will focus both on his hope of restoring abortion rights in America and on his administration’s effort to put more money in Americans’ pockets.

“You’re going to hear from him talking about gas prices,” Jean-Pierre told CNN’s Wolf Blitzer on “The Situation Room” Tuesday. “Look, we are doing everything that we can. We are taking this very seriously when it comes to inflation, when it comes to lowering costs. And the President is going to continue to do that work. That’s why the Inflation Reduction Act was so important.”

For months following the Supreme Court’s abortion decision, which the majority of the public opposed, Democrats believed anger over that ruling was one of their most powerful tools to motivate not just their base voters, but also moderate suburban women and independents, as they sought to defy historical trends that favor Republicans this cycle.

But the bombardment of ads casting Republicans as a threat to reproductive rights in many Senate races and House districts across the country may not be working as well as they’d hoped with many key races remaining on a knife’s edge. While the restrictive abortion laws that the GOP has embraced in many states are unpopular, voters cannot escape daily reminders of the strain on their wallets in this economic climate as they drive past signs advertising gas prices or fill up their carts at the grocery store.

Democrats have tried to highlight what they view as an array of policy achievements that they argue will reduce Americans’ costs. Those include the administration’s recent rule change to allow Americans to buy hearing aids over the counter without a prescription. And it also includes provisions in their health care, climate and tax law, including allowing Medicare to negotiate certain prescription drug prices, a cap on insulin costs for patients with diabetes, as well as tax credits for those with electric vehicles and rebates for families that buy energy efficient home appliances.

But in a CNN poll released last week, voters were tilting toward Republicans over Democrats in competitive districts. Ninety percent of voters in that survey said the economy would be extremely or very important in deciding their vote for who to send to Congress, while 84% put inflation in that same category. About 72% said abortion was as important.

There were also bracing signs for Democrats in a new poll released this week from CBS that showed the party’s momentum in the quest for control of the House appears to have stalled as the economy has become the central concern for voters.

About 65% of registered voters said the economy is getting worse and only 15% said it is getting better in the new CBS News Battleground Tracker poll. (About 20% said it is staying the same). And while gas prices nationally are below the record highs, about 63% of registered voters in that poll said they believed prices were going up in their area – pointing to the tall task ahead of Biden on Wednesday in convincing voters that he can help.

As both sides make their closing arguments, there are new signs this week that the electorate is highly interested in the November election.

Nearly 2.5 million Americans have already cast ballots, according to data from election officials, Edison Research, and Catalist. In 30 states where Catalist has data for 2018 and 2022, the pace of pre-election voting is keeping pace with where it was four years ago, when Democrats flipped the House in opposition to then-President Trump. (Catalist is a company that provides data, analytics and other services to Democrats, academics and nonprofit issue advocacy organizations.)

There were also signs of intense engagement as early voting got underway in Georgia this week. More than 131,000 voters cast their ballots on Monday, the first day of early voting. Georgia Secretary of State Brad Raffensperger reported that was up from 71,000 voters who cast ballots in 2018 – an 85% increase.

Whit Ayres, a pollster who advises Republican groups and candidates, cautioned that it is too early to forecast which party would benefit more from higher turnout, in part because more data is needed about which voters are casting those ballots. Many Democrats also prefer to cast ballots early, while many Republicans prefer voting on Election Day. But the early indicators, Ayres said, suggest “that the interest in this election is approaching the levels that we saw in 2018, which was the highest we had in over a century.”

Earlier this year, Republicans had a significant enthusiasm advantage, but the Supreme Court’s decision on abortion helped Democrats close that gap, he noted. In these closing weeks, Ayres said: “You’re starting to see very equal levels of enthusiasm and turnout, which is not going to help either side – it is simply going to run up the turnout numbers more.”

Still, a surge in enthusiasm levels in certain states, he said, “could sway some of those very, very close Senate elections. … But you can’t tell that until you see the state-by-state level of enthusiasm.”