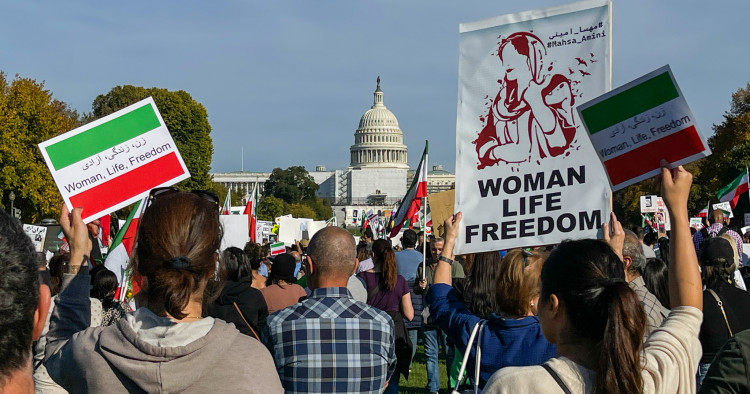 Where is the US’s red line on Iran’s protests?

A month after the new round of street protests in Iran, former U.S. President Barack Obama admitted that his administration’s passive policy regarding the 2009 protests, known as the Green Movement, was wrong.

“In retrospect, I think that was a mistake. Every time we see a flash, a glimmer of hope, of people longing for freedom, I think we have to point it out. We have to shine a spotlight on it. We have to express some solidarity about it,” Obama said in his Oct. 14 remarks. Stressing that after the 2009 movement “there was a big debate inside the White House,” he added, “A lot of the activists were being accused of being tools of the West, and there was some thought that we were somehow going to be undermining their street cred in Iran if I supported what they were doing.”

Obama’s comments received widespread coverage by Iranian media outlets. But even in this remarkable statement, he was ignoring a basic point: the issue with American foreign policy in 2009-10 was not whether or not Washington “expressed some solidarity” with the Green Movement. Rather, the attitude of the U.S. administration led the rulers of Iran to conclude that even an extremely violent crackdown on the protesters would not be met with a substantial response from Washington.

Put another way, it was not about what the U.S. government had not done — such as not supporting the Green Movement; the resulting situation and its longer-term consequences came about because of what Washington had done. For example, on Aug. 23, 2009 — amid the severe repression of demonstrators as well as the publication of horrifying news on the mistreatment of political prisoners — Iranian media revealed that Obama had sent a friendly letter to Ayatollah Ali Khamenei in an attempt to convince him to agree to a possible diplomatic deal with Washington.

On Nov. 3, 2009, Khamenei publicly referenced this letter, stating, “The new president of America said beautiful words! He repeatedly sent messages to me — oral [and] written ones — saying let’s turn the page, let’s create a new situation, let’s work together to solve the world’s problems; to this extent! I said that we do not prejudge, but we will look at their actions. They said we want to make a change. We said OK! Let’s see the change [in your behavior].”

Khamenei’s remarks about “repeated” messages from the U.S. president referred to the fact that Obama’s message was in fact his second secret letter to the Iranian leader. The first was sent on April 21, 2009, on the eve of Iran’s controversial presidential election. The Iranian public learned about that letter when Khamenei referred to it during his infamous Friday Prayer sermon on June 19, 2009. In this speech, the supreme leader warned the protesters’ supporters that if anti-government demonstrations were to continue, they would be responsible for the coming “bloodshed.” In the same sermon, he added that the American president had sent him a letter “expressing his interest in establishing relations” with the Iranian regime as well as his “respect for the Islamic Republic.”

Both references to Obama’s letters — in the media, on Aug. 23, and by Khamenei himself, on Nov. 3, 2009 — took the Iranian public by surprise, sending a clear message to the protesters: that regardless of the diplomatic statements by American officials criticizing the oppression by the Iranian authorities, Washington was secretly and desperately pursuing a possible deal with the Islamic Republic.

“See? We can make a deal together!”

During Donald Trump’s presidency, U.S. policy on Iran changed significantly. Trump pulled out of the Joint Comprehensive Plan of Action (JCPOA), imposed tougher sanctions on Tehran, and issued a surprising order to kill Qassem Soleimani, the commander of the Islamic Revolutionary Guard Corps’ (IRGC’s) Quds Force. Trump also made strong statements in support of Iranian street protesters, condemning Iran’s government during the public uprisings that took place while he was in office. Despite all this, he, like Obama, led Iranian officials to the conclusion that brutal crackdowns on popular protests would not lead to a serious reaction from Washington.

A few months after the mass Iranian protests of December 2017-January 2018, then-Secretary of State Mike Pompeo outlined 12 demands the U.S. wanted Iran to meet, emphasizing that until they were met, the Trump administration would continue to exert intense pressure on the Islamic Republic.

But to the surprise of many Iranians, all of the 12 demands announced by the Trump administration were related to Tehran’s strategic and foreign policy. None of them concerned the way the Iranian regime treated its own people; as if the internal behavior of the regime was not important enough to be mentioned.

During the November 2019 protests, Washington’s response created even more frustration. In a matter of 3-4 days, records were broken for the number of street protesters killed by the authorities since the establishment of the Islamic Republic. According to Reuters, about 1,500 people were massacred during this uprising.

The U.S. administration condemned the killings in strong terms, and Trump announced his support for the Iranians rallying in the streets. However, only two weeks after the end of the bloody suppression of the protests, Tehran exchanged Xiyue Wang, a Chinese-American imprisoned in Iran, for an Iranian prisoner being held in the U.S. On Dec. 7, 2019, Trump commented appreciatively on Tehran’s decision to release this American citizen, tweeting, “Thank you to Iran on a very fair negotiation. See, we can make a deal together!” In another statement that same day, Trump called the exchange “a great thing for Iran.” He told reporters, “I think it was great to show that we can do something. It might have been a precursor as to what can be done.”

Such remarks undeniably convinced many Iranians that for the president of the United States, a single prisoner swap was more important than the political message addressed to the Islamic Republic. These frustrated Iranians could not understand why Trump should thank the Islamic Republic immediately after the November 2019 bloodshed.

Does Tehran care about Biden’s reaction?

The highest priority for American presidents is, and must be, to protect the interests of the United States. Both Obama and Trump — based on their own perspectives — clearly considered a deal with Tehran to be in line with U.S. national interests.

Nonetheless, what happened in practice was that Obama’s attitude toward the Islamic Republic during the 2009 protests resulted in Tehran becoming more stubborn in pursuing its nuclear program — the regime only showed more flexibility years later, following unprecedented sanctions on Iran’s oil exports and banking system. Trump’s expressed enthusiasm to deal with Iran in 2019 did not lead to an accord either.

On the other hand, the adoption of such positions by different American presidents convinced the Iranian authorities that no matter how many protesters they kill, arrest, or torture, there will always be tangible ways to evade the consequences of their actions. For instance, if Tehran keeps Washington hopeful about the possibility of a strategic deal in the future, that will be enough to control the U.S.’s reaction to the Iranian regime’s internal repression.

Against this background, it seems unlikely that the Islamic Republic is concerned about what the current U.S. administration may say about the ongoing nationwide demonstrations in Iran and the authorities’ crackdown. On Oct. 15, President Joe Biden said he was “stunned” by the mass protests and declared that the U.S. stands with Iran’s “brave women.” However, the Islamic Republic’s authorities have learned that they don’t need to take Washington’s reactions to internal oppressions very seriously. Presumably, in their view, as long as the Biden administration maintains even the slightest hope for a new nuclear deal with Tehran, it will not take any tough actions vis-à-vis Iran’s domestic policies.

Until Iranian officials are disabused of such perceptions, their obstinate attitude is likely to lead to more brutal crackdowns, while at the same time increasing the protesters’ distrust of the United States and decreasing their chances of bringing about fundamental change in their country.