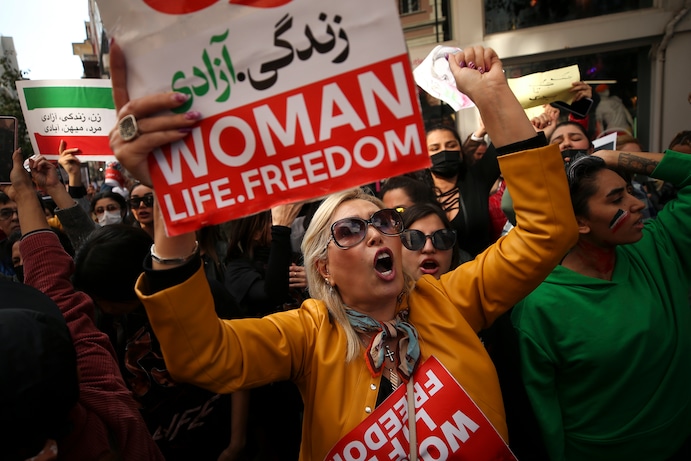 For five weeks, Iranian protesters have braved a brutal crackdown to challenge the country’s authoritarian clerical rulers, drawing the world’s attention — and the efforts of commentators in the West to explain what the demonstrators want.

The anti-government protests began in response to the death of 22-year-old Mahsa Amini, who died while in the custody of so-called morality police after being detained for an alleged violation of headscarf rules. But the protests have come to encompass a wide range of grievances, which are reflected in the protesters’ rallying cries.

Some slogans are developing as events unfold, and many are twists on rhetoric rooted in Iran’s 1979 Islamic revolution — the foundational event for the ruling elite but increasingly distant for young Iranians at the helm of demonstrations.

Altogether, the battle cries of the protest movement present a “remarkable intersectional critique of dictatorship,” and a range of gender, religious, ethnic and generational contentions, said Eskander Sadeghi-Boroujerdi, a professor of modern Middle East history at Goldsmiths, University of London.

The death of Amini — and the state’s efforts to cover it up with impunity — was all too familiar for many Iranians. In the month since, anger over four decades of gender discrimination, repression, fundamentalist rule and inequality has united Iranians across class, geographic and ethnic lines.

Before Amini, Iranian protesters shouted the names of male political figures, said Fatemeh Shams, a professor of Persian literature at the University of Pennsylvania. Now the names of two teenage girls reportedly killed for protesting, Nika Shakarami and Sarina Esmaeilzadeh, are part of the new generation of refrains.

“Woman, life, freedom,” is one of the women-led uprising’s defining chants. It’s a fitting slogan for a movement in which the experiences of women, and the corrosive impact of gender discrimination, have been front and center. In the weeks before Amani’s death, Iranian women held small protests against mandatory headscarves and other rules as the morality police stepped up patrols in middle- and lower-class neighborhoods while leaving the wealthy alone.

Women and girls removing their mandatory headscarves has become a defining aspect of these protests. But the politicization of the hijab and women’s bodies in Iran is not new: The Shah banned the hijab in the 1930s, and women marched to demand it during the 1979 Islamic revolution. Among the distinguishing factors of this uprising are chants that reject both models: “Independence, freedom, optional hijab,” one slogan goes.

“Woman, life, freedom,” however, is not rooted in Iran’s revolution. It comes from the Turkey-based Kurdistan Workers’ Party, or PKK, a Kurdish militant group with a feminist and radical left heritage, said Djene Rhys Bajalan, a professor at Missouri State University who specializes in Kurdish history. Kurds form a large minority in Iran — as well as in Turkey, Iraq and Syria — and have been at the center of the past month’s uprising.

The rallying cry’s Kurdish roots have gone largely unacknowledged, Bajalan said. But it spread across Iran, and the globe, in part because “people can project unto it what they want to believe,” he said. “Although it has its origins in a radical anti-capitalist movement, it is very easy to appropriate to liberal bourgeois feminism.”

The ubiquitous shouts of “death to the dictator” and “death to Khamenei” — the supreme leader of Iran and its Islamic Revolutionary Guard Corps (IRGC) — capture a people seething under decades of despotism. Iranians chanted “Death to the shah” in the revolution to oust the Western-backed autocrat Mohammad Reza Pahlavi. Shiite revolutionaries won, and “Death to America” became a rallying cry for the repressive Islamic Republic they set up. During protests in 2009 over election fraud, protesters avoided using highly charged, taboo iterations naming the supreme leader, Sadeghi-Boroujerdi said. But over time, the fear waned. “Experiencing Islamist government has had a profoundly disillusioning effect,” he said. “There’s been a subterranean sea change in values.”

Many Iranians are fed up with efforts to reform from within. Some demonstrators call openly for a revolution to overthrow their clerical government. “Islamic Republic, we don’t want,” goes one chant. Others reference Islamic iconography in a critique of how the state uses religion as a front for repression. There are the occasional chants in favor of the monarchy, an idea with a following abroad. But one new iteration — “Death to the shah, death to the religious leader” — captures a consistent repudiation of autocratic rule, be it a king or a cleric. “The binary canceling one system in favor of another one no longer represents the ideals of the protesters,” Shams said.

Iran’s security forces — in particular the IRGC and its paramilitary force, the Basij — are another key target of the chants. The IRGC effectively runs its own parallel state with vast economic, political and institutional power and one overarching mandate: to protect the Islamic Republic. The Basij are closely associated with the state-sanctioned violence, repression and corruption Iranians have long endured, and are brought out to crush protests. One slogan, “cannons, tanks and guns won’t work anymore, tell my mother that she doesn’t have a daughter,” renounces violence against women, but also casts it as part of a historical pattern of repression: Iranians shouted the refrain with “son” in place of daughter in the 1980s to protest the continuation of the Iran-Iraq war.

One word often shouted at the police and Basij — “dishonorable” — carries a connotation that can be akin to a curse for Iranians. “The state used to inhabit the role of the patriarch,” Sadeghi-Boroujerdi said. But Amini’s death underscored its failure to protect people, especially women. Yelling “dishonorable,” he said, in effect rejects the very legitimacy of the state and Iran’s security forces.

They dream of reaching America. Their forced service in Iran’s Revolutionary Guard locks them out.

The leaderless protest movement has focused on unifying Iranians and rejecting the ethnic divisions that their leaders exploit. “Don’t be afraid, we are united,” people chant in unison. Iran’s Kurds, who are predominantly Sunni Muslim, have long been a vanguard of resistance against the Islamic Republic. Like other minorities, they also face heightened discrimination and repression. Security forces attacked protesters in Zahedan, a southeastern city populated by the Baluch minority, on Sept. 30 in what has been the bloodiest day of the uprising. The bloodshed spawned slogans such as, “From Zahedan to Tehran, I sacrifice myself for Iran” — an expression of national unity and a twist on a slogan used to support the state’s foreign policy agenda.

The grip of Iran’s clerical leaders remains strong. Tehran is continuing to impose censorship and internet blackouts to prevent people from sharing news and videos of the crackdown, and the chants that accompany protests. The number of people Iranian authorities have killed and detained continues to rise.

But the protest slogans cannot be stopped from spreading. “Don’t call it a protest,” university students shout in videos shared online. “Call it a revolution.”