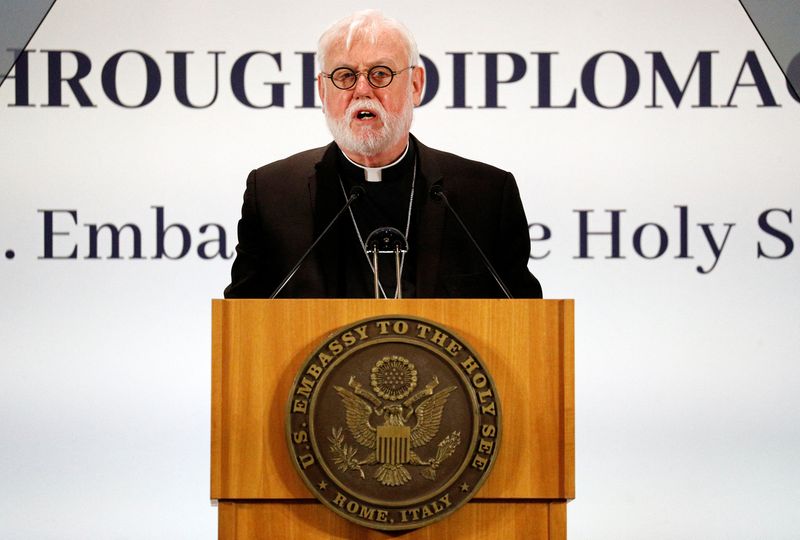 BEIRUT (Reuters) -A Vatican envoy criticised Lebanon’s politicians on his visit to Beirut on Tuesday, calling for an end to “the few profiting of the suffering of many” in a financial crisis which has plunged the bulk of the country into poverty.

Archbishop Paul Gallagher’s remarks come one week after the World Bank blasted https://www.reuters.com/world/middle-east/lebanese-govt-revenues-fell-by-nearly-half-2021-world-bank-says-2022-01-25 Lebanon’s ruling class for “orchestrating” one of the world’s worst national economic depressions due to their exploitative grip on resources.

“Let there be an end to the few profiting off the suffering of many. No more letting half-truth continue to frustrate people’s aspirations,” the archbishop said.

Lebanon is suffering a financial crisis that began in 2019 when its financial system collapsed under colossal state debts.

While politicians have acknowledged that corruption exists in Lebanon, none have taken individual responsibility, saying they are doing their best to rescue the economy.

The archbishop also warned against outside interference in Lebanon’s affairs.

“Stop using Lebanon and the Middle East for outside interest and profit,” Gallagher said.

While he did not mention Iran-backed Hezbollah, his words come as Lebanon is trying to thaw ties with Gulf countries which once spent billions of dollars in Lebanon but have pulled away due to the Shi’ite Muslim group’s powerful influence in Lebanese politics.

Hezbollah holds the majority in the parliament, has a militia more powerful than Lebanon’s army, and supports Iran in its regional struggle for influence with U.S.-allied Gulf Arab states.

Gulf Arab states say the group has aided the Iran-aligned Houthis who are fighting a Saudi-led coalition in Yemen.

Lebanon’s most senior Christian cleric, Maronite patriarch Cardinal Bechara Boutros Al-Rai, is a critic of Hezbollah, saying it has harmed Lebanon by dragging it into regional conflicts.

“The Lebanese people must be given the opportunity to be the architects for a better future in their land without undue interference,” Archbishop Gallagher said after meeting with President Michel Aoun, a Christian ally to Hezbollah, at the presidential palace in Baabda.

The archbishop added that the Holy See could host a dialogue between Lebanese political actors, if it is requested by all parties involved.

The archbishop also said that Pope Francis would like to visit Lebanon soon.

Aoun called in December for national dialogue on matters including defence. Most Lebanese parties declined to take part, preferring to wait for a general election due to be held in May, when Hezbollah’s adversaries hope to overturn its majority.