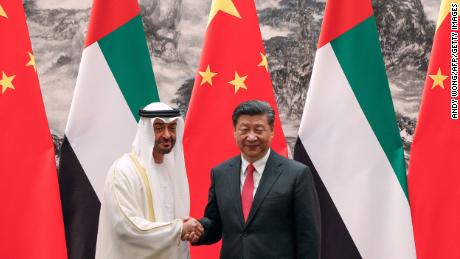 Beijing 2022 organizers reported 71 new cases of COVID-19 over the weekend, bringing the total to almost 250 cases linked to the Winter Olympics as the opening ceremony nears.

According to data released by the local organizing committee on Monday, 28 of the weekend’s cases involved athletes or team officials, while 20 were detected by screening tests inside the “closed-loop system” – the bubble that organizers have created to separate Olympic participants from normal Chinese society.

Brian McCloskey, the chair of Beijing 2022’s medical expert panel, said in a January news conference that he expected case figures to be highest at this stage, as participants arrive from their respective countries.

The COVID-19 countermeasures in Beijing are even stricter than those that were in place for the most recent Summer Olympics in Tokyo — a byproduct of both the omicron variant, and China’s “COVID-zero” policy.

All participants at these Games, from foreign athletes to Chinese volunteers, are being kept in the closed-loop system — barred from taking public transportation or so much as walking outside the established perimeters of their hotels or competition venues.

Pfizer and its partner BioNTech are expected to request FDA emergency-use authorization for its COVID-19 vaccine for children under 5, the Washington Post and New York Times reported.

The request could happen as soon as Tuesday and the authorization could occur by the end of February, multiple people familiar with the discussions told the Times and the Post.

COVID-19 cases among children have spiked severely in 2022 with the omicron variant, recording over 3.5 million child cases in January — triple the peak level of delta’s wave in 2021, according to the American Academy of Pediatrics.

The Washington Post reported that Pfizer and BioNTech announced in December that two doses of its vaccine in 2, 3, and 4-year-olds didn’t trigger an immune response comparable to the response in teenagers and adults, but were effective in children ages 6 months to 2 years old.

In January, the San Francisco Department of Public Health sanctioned a second booster dose for everyone who received Johnson & Johnson as their first shot, making it the only known place in America where a third shot is officially allowed for those with normal immune protection.

San Francisco’s Department of Health described the third dose as “an accommodation” based on recent studies that found a third dose of an mRNA COVID-19 vaccine, such as from Pfizer and Moderna, is needed to induce adequate protection as immunity wanes. The third dose reduces symptomatic infection, hospitalization and severe outcomes from the omicron variant.

The second booster is only available to residents of San Francisco or people who got their initial J&J vaccination there.

“San Francisco’s Department of Public Health has always been a vanguard of the way things should be from a scientific perspective,” said Dr. Peter Chin-Hong, a professor of medicine and infectious disease at the University of California, San Francisco.

In a release, the department said while the research so far has focused on people whose vaccines were either from Pfizer or Moderna, “We believe that similar studies in persons whose primary series was a single J&J vaccine dose would yield similar results showing that three doses are needed for optimal protection.”