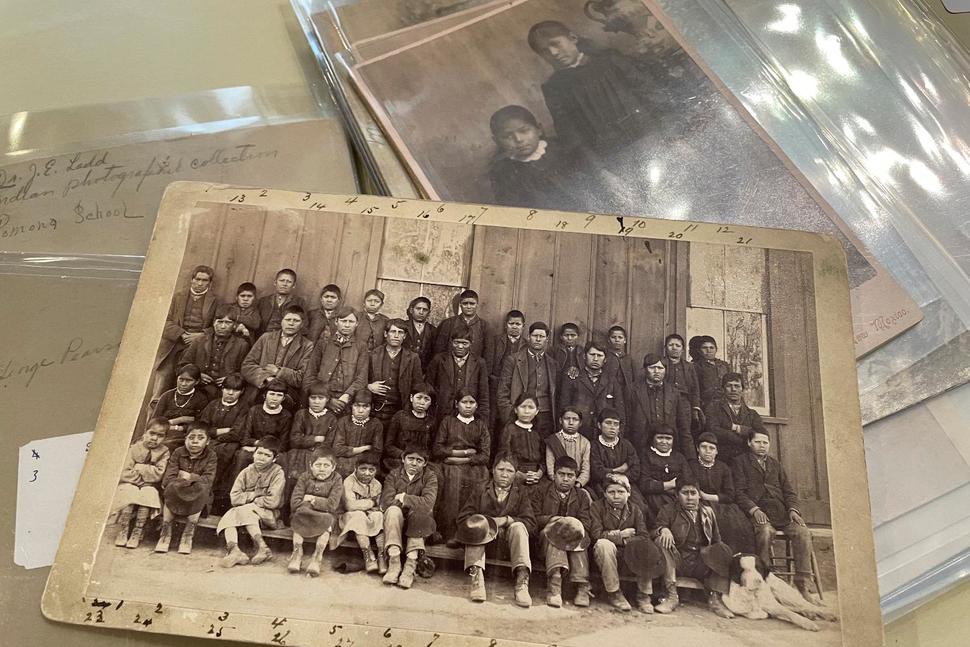 The U.S. Interior Department is embarking on a massive undertaking to uncover the troubled legacy left by Indigenous boarding schools.

They sat inside a dust-covered box that had been stashed away, untouched, for years: black-and-white photographs of Apache students who were among the first sent to a New Mexico boarding school bankrolled by East Coast parishioners and literary fans.

The first showed the girls bundled in blankets with moccasins on their feet. The next, taken just weeks later, was starkly different, the children posing in plaid uniforms, high-laced boots and wide-brimmed straw hats.

Adjunct history professor Larry Larrichio said he stumbled upon the 1885 photos while researching a military outpost, and “it just brought a tear to my eye.”

The images represented the systematic attempt by the U.S. government, religious organizations and other groups to assimilate Indigenous youth into white society by removing them from their homes and shipping them off to boarding school. The effort spanned more than a century and is now the focus of what will be a massive undertaking by the U.S. government as it seeks to uncover the troubled legacy of the nation’s policies related to Native American boarding schools, where reports of physical and sexual abuse were widespread.

“I looked at the faces of these beautiful Apache girls in their Native attire and then those ugly American bonnets,” said Larrichio, a research associate with the Latin American and Iberian Institute at the University of New Mexico. “It just knocked me on my butt.”

The U.S. Interior Department has started combing through records in hopes of identifying past boarding schools and the names and tribes of students. The project also will try to determine how many children perished while attending those schools and were buried in unmarked graves.

As part of an effort that began years earlier, the disinterred remains of nine Native American children who died more than a century ago while attending a government-run school in Pennsylvania were handed over to relatives during a ceremony Wednesday so they could be returned to Rosebud Sioux tribal lands in South Dakota.

Interior Secretary Deb Haaland, a member of Laguna Pueblo and the first Native American to lead a Cabinet agency, has promised a comprehensive review while acknowledging it would be a painful and difficult process.

Larrichio’s discovery hints at the immensity of the challenge, as each bit of new information leads down another avenue that needs to be researched.

While some records are kept by the agency and the National Archives, most are scattered across jurisdictions — from the bowels of university archives, like those Larrichio found, to government offices, church archives, museums and personal collections.

That’s not to mention whatever records were lost or destroyed over the years.

The National Native American Boarding School Healing Coalition has been working to amass information about the schools for almost a decade. With the help of grant funding and the work of independent researchers across the country, the Minnesota-based group has identified nearly 370 schools and estimates hundreds of thousands of Native American children passed through them between 1869 and the 1960s.

“It’s going to be a monumental task, and the initiative that was launched by the Interior is great, but it’s a short timeline and we’ll need further investigation,” said Christine Diindiisi McCleave, the group’s CEO and a citizen of the Turtle Mountain Ojibwe Nation.

The coalition knows firsthand how difficult uncovering the truth will be. The group years ago filed public records requests with the federal government for information about the schools. The government didn’t have answers, Diindiisi McCleave said.

Of the schools identified by the group so far, she said records have been found for only 40% of them. The whereabouts of the rest are unknown.

What is known from the research and from family accounts is that there were children who never made it home.

With the Interior Department taking a first formal step to uncover more about the history, Diindiisi McCleave and others are renewing their push for a federal commission to be established in the U.S., much like one created in Canada, where the remains of more than 1,000 children were discovered in recent weeks at residential schools there.

In the United States, the Indian Civilization Act of 1819 and other laws and policies were enacted to establish and support Indian boarding schools across the nation. For over 150 years, Indigenous children were taken from their communities and forced into boarding schools that focused on assimilation.

The discoveries in Canada and the renewed spotlight in the U.S. have stirred strong emotions among tribal communities, including grief, anger, reflection and a deep desire for healing.

Haaland, Diindiisi McCleave and New Mexico Indian Affairs Secretary Lynn Trujillo have all recounted stories about their grandparents being sent away to boarding schools. They talk about the intergenerational trauma that was triggered by the experience and the effects that have manifested themselves on younger generations seeking to maintain their language and cultural practices, which were banned in boarding schools.

For some families, the boarding school experience was a forbidden topic, never to be talked about.

For others, the recent attention has spurred fresh conversations. Trujillo talked about her grandmother being taken when she was 6 and telling stories about how she was always so hungry and cold.

Trujillo said while her grandmother made it home, unlike other children, that experience shaped who she was.

“Our communities and Indigenous people have known about these atrocities for a very long time, but being able to bring them to light and talk about them — no matter how painful — is part of that process toward healing,” said Trujillo, a member of Sandia Pueblo who has been focused on bringing together Indigenous youth to highlight the need for more mental health resources and educational opportunities.

“The biggest part of the work starts with the truth, and that includes not only truth from the federal government in this case and the churches that ran the schools, but hearing the truth from the perspective of the people who experienced it, listening to the testimony of survivors and descendants and understanding the full scope and impact of these experiences,” she said.

Experts say the list of known boarding schools — and burial sites — will only expand as more grassroots research sheds light on schools that have otherwise been lost to history.

Already some researchers have spent years piecing together records, old newspaper reports and oral histories to find and identify lost children. Others have searched properties using ground-penetrating radar. Some state agencies that focus on Indigenous affairs are considering launching investigations into known schools.

The Interior Department said it’s working on ways to “create a safe space,” such as a hotline or special website where people can share information about the schools and seek resources.

In New Mexico, the Ramona Industrial School for Indian Girls opened in the mid-1880s and housed mostly Apache students, many of whom had parents who were being held prisoner by the U.S. Army at Fort Union, about 100 miles (160 kilometers) away.

Not far from Santa Fe’s historic plaza, the school was founded by Horatio Ladd, a congregational minister who contracted with the military to send Indigenous students there. The endeavor was supported by parishioners and admirers of author and activist Helen Hunt Jackson through fundraising newsletters and postcards.

Larrichio was working on a project for the National Park Service years ago when he happened upon brochures and other documents related to the school. It was a month-slong effort that involved combing through hundreds of archival collections at the Center for Southwest Research at the University of New Mexico.

With only brief references in books on other subjects, the school is an example of the difficult work facing the Interior Department as it embarks on its investigation. While Larrichio is sharing the materials he uncovered with the National Native American Boarding School Healing Coalition, he said “it’s the tip of the iceberg,” and much more work needs to be done.

“A lot of this information is probably buried — literally buried with respect to this collection I uncovered,” he said. “How many other stories are buried, and how much was purposefully destroyed? I think it’s going to be very hard to really get a comprehensive understanding of the impact of this.”