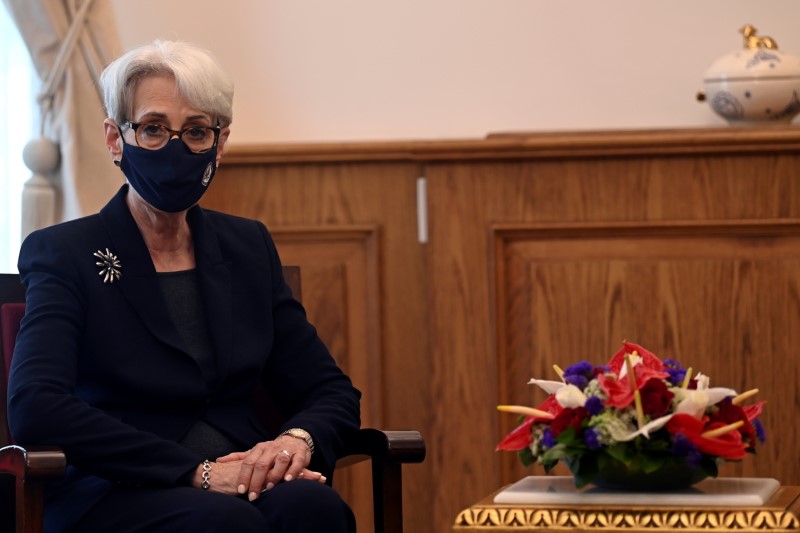 FILE PHOTO: U.S. Deputy Secretary of State Wendy Sherman is seen during her visit to the Orthodox Patriarchate in Istanbul, Turkey May 29, 2021. Ozan Kose/Pool via REUTERS

The meeting between Sherman and Qin Gang will take place in the afternoon at the State Department in Washington, the department said on Wednesday in announcing its public schedule for the following day.

Qin Gang, 55, who has earned a reputation for often pointed public defenses of his country’s positions, struck an optimistic tone as he arrived in Washington in late July to take up his post, saying great potential awaited bilateral relations.

In the last week of July, Sherman held high-level talks in China that ended with both sides signaling that the other must make concessions for ties to improve.

Qin previously served as a vice foreign minister whose recent past portfolios included European affairs and protocol. He also did two stints as a Chinese Foreign Ministry spokesman between 2006 and 2014.

He replaced China’s longest serving ambassador to the United States, Cui Tiankai, 68, who last month announced his departure after eight years in Washington.

Relations between Beijing and Washington deteriorated sharply under former President Donald Trump, and since taking office in January, President Joe Biden has maintained pressure on China, stepping up sanctions on Chinese officials and vowing that China won’t replace the United States as the world’s global leader on his watch.

China’s Foreign Ministry has signaled there could be preconditions for the United States on which any kind of cooperation would be contingent, a stance some analysts say leaves dim prospects for improved ties.