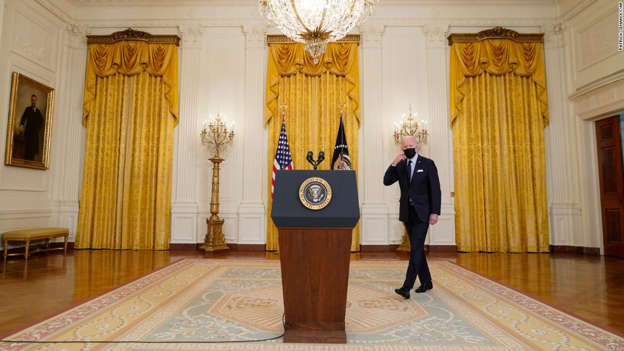 (CNN)A bust in the latest US government jobs report is electrifying the Washington battle over Joe Biden’s massively ambitious programs and offering an early hint of the political peril the President could face if the economy doesn’t bounce back strongly.

The data, showing 266,000 new positions were added in April, a quarter of the number analysts had expected, had the effect of convincing both Republican and Democratic lawmakers — who return to Washington this week — that their dueling economic and political positions are justified.
The report will further juice an already tense atmosphere in Washington as divisions are hardening after Biden’s first 100 days in office. The President will deliver remarks on the economy Monday, then host the four top leaders of the House and Senate for talks for the first time on Wednesday. Senate Minority Leader Mitch McConnell will attend the meeting just days after saying 100% of his focus is on obstructing the new presidency. The White House is, meanwhile, readying a strong push for Biden’s infrastructure package. The plan’s billing as a massive jobs package will take on even more resonance given the invigorated debate about unemployment.
It’s always unwise to draw sweeping conclusions about any single employment report — especially as there are other statistical and anecdotal signs that the economy may be poised for a post-pandemic boom. But try telling that to Washington politicians who are on hair trigger alert for any development that might define the early months of a new administration.
The GOP pounced, as it seeks to build public mistrust of Biden’s economic policies, arguing that his strategy of spending trillions of dollars in big federal programs is already proving to be counterproductive.
The below-expectations report also offered the party an issue to unite around that did not involve the internal recriminations over an attempt by House Republicans to oust Wyoming Rep. Liz Cheney from her leadership position over her refusal to buy ex-President Donald Trump’s lies about election fraud, which will take center stage with a conference vote likely this week.
Democrats seized on the same evidence that Republicans claim show Biden is damaging the economy to argue that the government must double down on efforts to help less well-off Americans still mired in the pandemic’s economic dislocation. That group has historically benefited less from previous recoveries than wealthier Americans and is the key constituency that the President is targeting in the broadest attempt to remake the economy in decades.

‘Headed in the right direction’

White House Covid-19 response coordinator Jeff Zients styled the report as a blip in a generally positive trend, following a bumper report in March that blew past expectations and showed that 916,000 jobs were created, although that has since been revised downward to 770,000.
“We’re headed in the right direction,” Zients told Jake Tapper on CNN’s “State of the Union.”
South Carolina Rep. James Clyburn, the No. 3 House Democrat, hit back at claims by Republicans that unemployment benefits provided under Biden’s $1.9 trillion Covid relief plan were convincing many Americans not to go back to work — after a group of GOP governors announced they would block the extended federal help.
“I will tell you we may be talking about the big lie as it relates to the election, but very close to that is this notion that people don’t want to work. I have not met any of those people who don’t want to work,” Clyburn said on “State of the Union.”
Commerce Secretary Gina Raimondo said on CBS’s “Face the Nation” that it was appropriate for governors in some regions to respond to their local jobs market. But she also criticized the rationale of the Republican argument that unemployment benefits were stopping people from going back to work.
“There’s nothing in the data which would suggest that that’s the reason people are out of work,” Raimondo said.
“We have to remember that, when the President moved to make this happen, this unemployment insurance has been a lifeline, a survival lifeline for so many Americans,” she added.

With Biden gearing up for a bipartisan push on the next phase of his economic agenda, Republicans seized on the disappointing numbers released Friday to claim that Biden’s big spending ways are already damaging the economy and that his plans to raise corporate taxes to pay for a broad infrastructure overhaul would crimp growth. They are also demanding the end of all social distancing measures even in areas where the pandemic is still raging.
“If Joe Biden had done nothing, the jobs report would be greater and more people would be in work today,” House Minority Leader Kevin McCarthy of California said on “Sunday Morning Futures” on Fox News.
Republicans, enjoying the luxury of being in the opposition, are making politically expedient arguments that fit their ideology. Before the jobs report, they were saying the economy was doing so well that further big-ticket government spending is unnecessary. Now they are arguing that extended federal unemployment benefits are stopping people from getting back to work. The group of GOP governors slashing the $300 weekly in extended unemployment benefits are trying to force people back to work in low-wage jobs.
Utah’s Republican Gov. Spencer Cox told Tapper that cutting those benefits was “a good idea.”
“The purpose of those funds were absolutely critical during the pandemic, as we struggled. Now we’re towards the end of the pandemic. And here in Utah, our unemployment is at 2.9%, the lowest in the nation,” Cox said.
“The biggest problem we have right now in the state of Utah are finding workers for the jobs that are available.”

As the economy continues to open up, more vaccines go into arms, and the country is poised for a strong summer of travel, it’s possible that future Labor Department jobs reports will show significant improvements.
But Friday’s shock news also suggested there are unique circumstances at play in a post-pandemic economy that are not usually in the mix after a recession.
Given still genuine fears about public health and with the virus still at high levels, it would not be surprising if some workers in close to minimum wage positions feel safer continuing to draw unemployment benefits — even with more and more Americans taking advantage of vaccines. Sectors including the restaurant industry, which relies on intense, grueling and often poorly paid work, are having huge difficulties in attracting sufficient staff to operate fully.
While Republicans say that the answer is to cut benefits, Democrats, including in the Biden White House, stress that such conditions are exactly the reason why vulnerable industries, like the hospitality trade, need public support. Biden spent time last week, for instance, promoting a program specifically aimed at helping the restaurant trade through a still tricky period.
The new unemployment report could actually add some momentum to Biden’s warnings that an aggressive government effort is needed to ensure that the economy better caters to the needs of the less well off. Biden is asking Congress to spend tens of billions of dollars, for instance, on free childcare and home health care for sick and elderly Americans that can help their relatives, who currently look after them, back into the work force.
“The number one reason now that people aren’t going back to work is what you said, fear, or they can’t find childcare or schools are still closed,” Raimondo said on CBS on Sunday.
The jobs report was one of the few occasions in his first months in office where Biden has suffered setbacks with polls showing most Americans favor his management of the pandemic. Republicans have sought political advantage on another such issue — overly high numbers of undocumented child migrants flowing over the US border with Mexico.
It is unclear whether one single jobs report has the capacity to alter the delicate political dynamics the President faces. He may get some political insulation from the fact that 54% of Americans in the latest CNN/SSRS poll see the state of the economy as good. That number is up significantly from 43% three months ago and far higher than it was under Trump in May 2020.
Still, the dynamics of power in Washington, with tiny Democratic majorities in the Senate and the House, mean that a prolonged slowdown in jobs growth could make tougher the President’s task of getting moderate Democrats like West Virginia Sen. Joe Manchin to back his expansive agenda.
And the multi-trillion-dollar gamble that Biden is making could end up leaving him politically exposed unless the economy delivers in the run-up to the midterm elections next year, when the party out of the White House almost always gains seats following a change in administration.
A strong economy is one way Biden may be able to buck that trend, though it remains to be seen whether pocketbook issues even in a good environment will overcome the cultural arguments that Trump used to earn his bond with grassroots conservative voters.