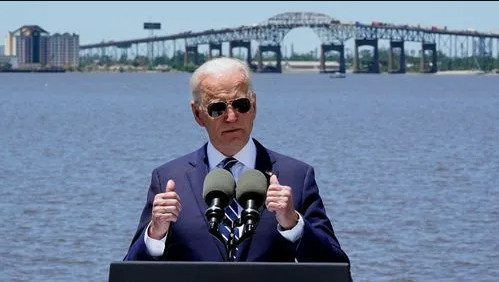 (CNN)President Joe Biden used a fleeting handshake moment below Air Force One this week to pitch two Republican senators on his plan for infrastructure.

An airport tarmac in New Orleans wasn’t really the setting for a full debate on his $2.3 trillion plan, which Republicans have uniformly deemed too big. But walking away, neither Biden nor his GOP greeters believed anything was off the table.
The impromptu meeting, described by people familiar with it, came as Biden is preparing to enter what he views as a critical stretch for testing the bounds of bipartisanship. Though he confessed recently he doesn’t quite “understand” Republicans anymore, Biden will have ample opportunity to try figuring them out in the days ahead.
He plans to meet Thursday with Sen. Shelley Moore Capito, a West Virginia Republican, and a selection of Republicans of her choosing to hear out a roughly $600 billion counterproposal to his infrastructure plan. And on Wednesday Biden will sit down with the Republican and Democratic leaders of the House and Senate to gauge just how much they can work together to advance his agenda.
In the meetings, Biden hopes to discern how serious Republicans are about passing a bipartisan infrastructure package, which he is now signaling could come in smaller than he initially proposed. This week Biden allowed publicly for the first time he could be willing to raise the corporate tax rate to only 25%, down from the 28% he initially suggested.
He and his Democratic allies in the Senate plan to use the next two weeks to make a sustained push for an agreement on a scaled-back plan, according to aides and White House officials. Some officials have set an unofficial deadline of Memorial Day to assess how much progress is really being made.
Yet looming over the talks is the President’s assessment of the opposite party as rudderless and unrecognizable from the one he thought he knew. Whether Republicans’ internal divides, and growing adherence to Biden’s predecessor, prove a barrier to cooperation remains an open question to a President and White House still hopeful to demonstrate an ability to work across the aisle.

A coincidence of timing only underscores the dueling GOP impulses Biden now confronts. On the same day he will meet at the White House with congressional leaders, including Senate Minority Leader Mitch McConnell and House GOP leader Kevin McCarthy, Republican lawmakers will convene in a conference meeting where they appear ready to oust Rep. Liz Cheney — the House’s No. 3 Republican — from her leadership post.
That is the development that prompted Biden this week to admit he understands little of today’s Republican Party. As he seeks out even a small number of Republican votes on a potential infrastructure compromise, he is self-admittedly still coming to grips with a party he says has changed.
“It seems as though the Republican Party is trying to identify what it stands for,” he told reporters on Wednesday. “And they’re in the midst of a significant, sort of, mini-revolution.”
Already, Biden has expressed more concern about the state of the GOP than nearly anyone. Far from reveling in the internal schisms that appear likely to cost Cheney her place in leadership, Biden has wondered aloud what happened to the party he spent decades working alongside in the Senate and later as vice president.
The roiling debate over the role former President Donald Trump will play in Republican politics going forward would appear to give Biden an opening to advance his agenda without much resistance from a distracted and divided GOP. And many skeptical Democrats believe it’s a waste of time attempting to sound out Republicans at all, arguing there was little payoff to that approach in former President Barack Obama’s tenure.
Their case was given a boost this week after McConnell, speaking to constituents in Kentucky, said “100% of my focus is on stopping this new administration” — an echo of his comment in 2010 that his most important task was making Obama a “one-term president.”
For the rest of Obama’s term, his aides cited that comment as evidence of McConnell’s unwillingness to work with them on anything of substance, including when people like then-Vice President Biden pushed for bipartisanship on items like health care and gun control.
The latest version of McConnell’s vow initially raised alarm among Biden’s aides. “That’s a very unsettling thing for me to hear,” one of Biden’s senior economic advisers, Jared Bernstein, said on Thursday.
Biden, however, seemed to brush off McConnell’s comment.
“He said that in our last administration with Barack, he was going to stop everything,” Biden said. “And I was able to get a lot done with him.”
And on Friday, press secretary Jen Psaki suggested the President wasn’t overly burdened by McConnell’s rhetoric.
“The President’s view is that he’s ready to have a clean slate,” she said, adding later: “Inevitably there will be some strong disagreements with Republicans, and we know that. He was in the Senate for 36 years. He’s certainly no stranger to that.”

‘We badly need the Republican Party

Still, the party Biden spent more than three decades haggling with in the Senate is, by his own admission, no longer the GOP of today. Over the course of his early presidency, Biden has openly questioned whether there will even be a Republican Party four years from now. The deal-making he cultivated as a senator, which he promised to attempt as president, is inevitably complicated when the other side coalesces around the false suggestion that he did not fairly win the election.
Even one of the senators he greeted in Louisiana on Thursday, Sen. John Kennedy, was among the eight GOP senators who objected to certification of the election results on January 6.
Aides say the President is still hopeful of notching a bipartisan achievement before next year’s midterm elections, even as fellow Democrats view the possibility dubiously. Biden has made clear in private conversations with Democrats he thinks there’s both a pathway to an agreement and overall value for the country in trying to reach a bipartisan conclusion, according to two people with knowledge of the conversations.
“We badly need a Republican Party. We need a two-party system. It’s not healthy to have a one-party system,” Biden said this week. “And I think the Republicans are further away from trying to figure out who they are and what they stand for than I thought they would be at this point.”
The bipartisan push on infrastructure is still in its early stages. White House officials have held meetings with moderate lawmakers and their staffs, and members of Biden’s Cabinet — principally Transportation Secretary Pete Buttigieg — have been calling members of Congress to feel out areas of cooperation.
Far from fleeing the Democratic president’s spotlight, many Republicans appear eager to at least put forward a show of bipartisanship, including the two senators who met him in Louisiana. Before his speech in front of a dilapidated bridge in Lake Charles, Biden was introduced by the city’s Republican mayor, Nic Hunter — a message of local Republican support for his plan the White House hopes conveys back to Washington.
Speaking afterward, Hunter voiced a view of bipartisanship that would hardly be recognizable in a Congress increasingly built around allegiances to party and personality.
“I certainly care what’s in the bill. But ultimately, I think that’s why people need to sit down and have conversations with each other. It’s so disappointing that I see some of my colleagues who want to demonize and grab headlines more than even sit down and have a conversation and I don’t understand that,” he said in an interview on CNN.
“What’s upsetting is that there’s not even conversation,” he added. “There’s not diplomacy anymore. It’s just simply throwing stones and staying on your side of the line that’s drawn in the sand and you won’t even cross a toe over.”